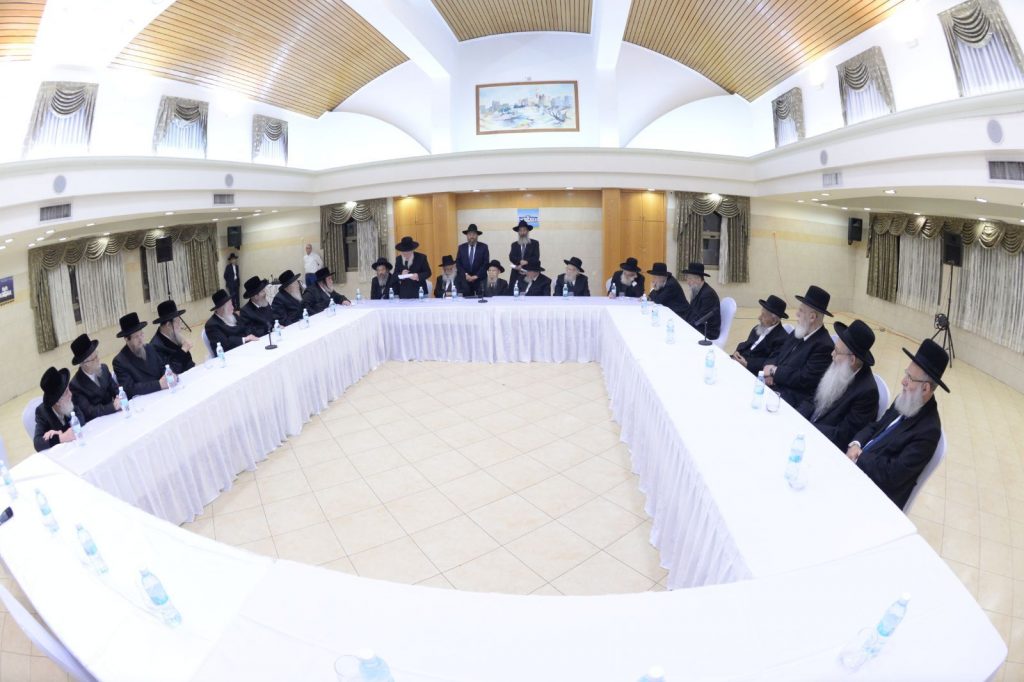 The meeting concerned the government’s ongoing flouting of agreements and understandings reached to eliminate chillulei Shabbos, such as railway infrastructure work on the railway despite there being no pikuach nefesh. All attempts to appeal to Transportation Minister Yisrael Katz or the special government committee that was established for this purpose have thus far been fruitless.

This meeting was held in advance of a meeting of the MKs of the three chareidi parties with Prime Minister Binyamin Netanyahu.

The discussion began with an overview of the situation presented by Harav Mordechai Stern, secretary of the Moetzes Gedolei HaTorah of Agudas Yisroel. The Gedolim were then addressed by their political representatives, Health Minister Rabbi Yaakov Litzman, Finance Committee Chairman Rabbi Moshe Gafni and Interior Minister Rabbi Aryeh Deri, who reviewed the political negotiations up to this point. This was followed by a closed session where the Gedolim discussed the subject in depth, and the possibility of quitting the coalition over the issue was raised and put on hold for future consideration.

Upon the conclusion of the asifah, Harav Avraham Rubinstein, secretary of the Moetzes Gedolei HaTorah of Degel HaTorah, read a statement summing up the meeting and its conclusions. The statement described how the Gedolim had been briefed on the ongoing work on roads and the railway during Shabbos, how businesses and other locals are chipping away at the wall of Shabbos, and how the tide of chillul Shabbos is unfortunately getting stronger, even forcing many to be mechalel Shabbos against their will.

The Gedolim therefore are calling on their political representatives to use every means at their disposal to get the national government agencies to assert their control on the matter, and prevent local municipalities from making their own decisions that impact the kedushah of Shabbos, and that any entity both public or private doing work should not receive a work permit from the ministry of labor for Shabbos unless it’s for life-saving work.

This was followed by a call for everyone to increase in their own kedushas haShabbos, and it was emphasized that Hashem promises that whoever keeps Shabbos won’t lose out as a result but will only stand to gain in both this world and in the world to come, and that chillul Shabbos will never result in profit, mazal and hatzlachah.

This statement concluded with the tefillah that the zechus of Shabbos should protect all of Klal Yisrael, and be the source of yeshuah v’rachamim, and with a brachah for ksivah v’chasimah tovah.