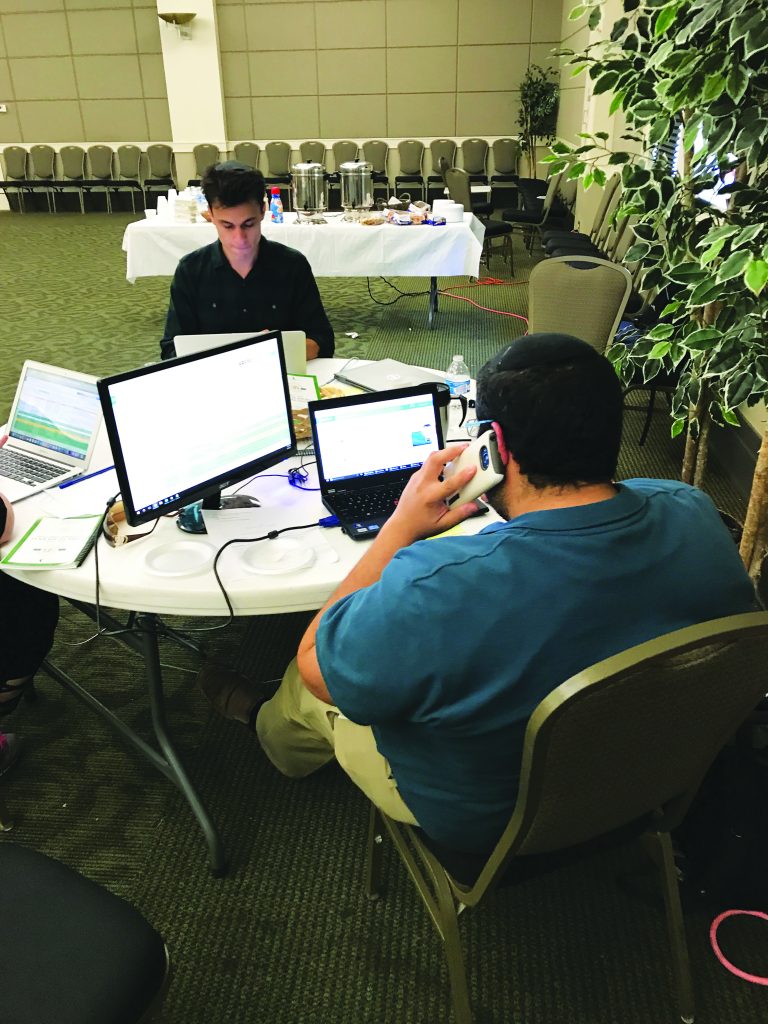 Since early this week, the Jewish community of Atlanta has been increasingly inundated with requests from Floridians fleeing the possible blow of Hurricane Irma. By Thursday, with many of Miami’s neighborhoods under formal evacuation warnings, what started out as a handful of families opening their doors to friends had turned into a multifaceted operation with a command center manned by a crew of volunteers, all with a touch of southern hachnasas orchim.

Rabbi Yitzchok Tendler, executive director of Beth Jacob, Atlanta’s largest shul, was one of those leading the effort charged with the task of placing and providing for roughly 1,000 guests being put up in the private homes of the many who have pitched in to the hospitality effort.

“We have some experience with this from hosting people from other hurricanes, but this is on a dramatically larger scale,” he told Hamodia. “More and more requests have been pouring in, today and yesterday, there was a big spike. You look away from the database for a while then look back and see 10 more names there.”

As the number of requests began to enter into the hundreds, community leaders realized that the process needed to be organized and coordinated. On Thursday, some 20 volunteers sat in Beth Jacob’s Heritage Hall armed with laptop computers and phones working to appropriately match guests and hosts.

“We have all sorts of people looking to come, seniors, some with medical needs, some with 10 kids, we have a massive data base of guests and hosts and we are working on making shidduchim,” said Rabbi Tendler. “This is community effort, we’re partnering with the Young Israel and working with people from a lot of different shuls to do what we can and make things as streamlined as possible.”

In addition to the outpouring of hospitality from Atlantans, Rabbi Tendler said that he had received many call from around the country offering to help. The Jewish community of Memphis, Tennessee, offered to host families, in the event that Atlanta fills up. Hamodia sent complimentary copies of its publication to Atlanta for the many “storm refugees.”

“Someone called from Toronto and asked what he could do, I told him there are people who have space, but not enough beds and we could really use air mattresses, he called me back a little while later that a truck with 300 of them was ordered and on the way,” said Rabbi Tendler.

Organizers had initially planned for host families to provide meals to those staying with them, but as the operation burgeoned, they decided to provide mass meals during weekdays and the coming Shabbos in Heritage Hall. Meals are being organized partly by The Spicy Peach, a local kosher grocery and catering establishment. The Marcus JCC in the Dunwoody area has offered complimentary guest passes to the arrivals pouring in offering use of their facilities and kosher café.

Mr. Yaakov Haller has put his job as the CEO of a local non-profit organization on hold for a few days to help coordinate the efforts of the various subcommittees working to accommodate the many Floridian guests.

“People are being exceptionally gracious, taking kids and even adults out of their beds to help,” he told Hamodia. “People here see how difficult it is and have opened their homes widely knowing that it could be several days before their guests are able to go home and deal with whatever awaits them there.”

Mr. Haller said that one of the many challenges was dealing with the uncertainly of many from Miami who had contacted the community to check on availability, but were still unsure as to whether they would choose to or even be able to make the trip north. Since Wednesday, when storm predictions turned graver, many highways out of Florida have had bumper-to-bumper traffic and many gas stations had long lines, while other had run out of fuel. Still, on Thursday, with many areas of Miami ordered to evacuate, requests to come to Atlanta had spiked by 35 percent.

“This effort has really brought our community together, many are extending themselves tremendously and realizing that this is what Klal Yisrael does for each other in times of need,” said Mr. Haller.

In Miami, Rabbi Moshe Matz, Florida director for Agudath Israel of America and Rav of the Aventura Shul, said that there was a noticeable emptiness in the streets testifying to the scale of the exodus that had already occurred.

“I don’t think the panic level can get any higher,” he told Hamodia. “It’s a really hard call to get up and go, especially when you don’t know where you are going or for how long. We don’t know what will happen on the roads and a lot of people can’t just drop everything for an undetermined period of time.”

In a small sign of the disruption to daily life in Miami, the Jewish Media Distribution Network, said that it was unsure as to for how long it would be able to continue service as its trucks could not fill up on gasoline and many stores selling the papers have closed.

Rabbi Matz said that he and others who have chosen to stay put remain hopeful.

“I am getting a lot of calls from people here with questions, but also a lot from people around the country who are asking what they can do and sending their best wishes,” he said. “We are grateful for all the tefillos and we know that the koach hatefillah is stronger than any hurricane.”