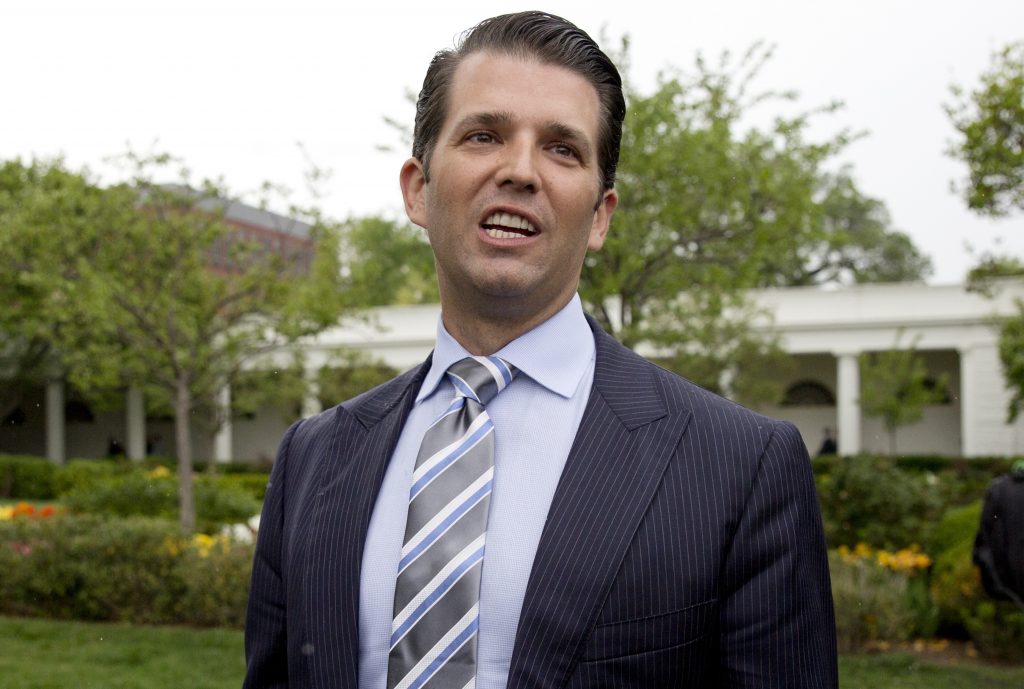 Donald Trump Jr.’s appearance Thursday before the Senate Judiciary Committee would probably focus on a meeting he had with a Russian lawyer and others during the final stretches of last year’s campaign. Emails released in July show that Trump Jr. was told the session at Trump Tower in New York was part of a Russian government effort to aid his father, the Republican nominee.

Special counsel Robert Mueller is investigating that meeting, also attended by Trump’s son-in-law and campaign chairman. A grand jury has heard testimony about it.

The three people who described Trump’s anticipated appearance to The Associated Press were not authorized to discuss the committee’s confidential work and spoke on the condition of anonymity.

Trump Jr. may also appear in the coming weeks before the Senate Intelligence Committee, which is conducting its own investigation.

Separately, the House Intelligence Committee has subpoenaed the Justice Department and the FBI for documents related to a dossier of salacious allegations involving President Donald Trump and possible ties to Russia.

In a letter Friday that was obtained by the AP, the committee wrote that it had served subpoenas on Aug. 24 to the department and the FBI for documents related to the committee’s investigation of Russian meddling. The Justice Department and FBI had missed the original Sept. 1 deadline, so the committee extended the deadline to Sept. 14.

The letter was signed by the committee chairman, Rep. Devin Nunes, R-Calif., who stepped back from the Russia investigation this year after he was criticized for being too close to the White House. Rep. Mike Conaway, R-Texas, took over the leading role, but his name does not appear on the letter.

As chairman, Nunes retains subpoena power in the committee.

According to the letter, the original subpoenas requested any documents related to the dossier and sought information about whether the department was involved in its production.

If the documents are not produced, the committee is seeking to compel Attorney General Jeff Sessions and FBI Director Christopher Wray to testify in an open hearing. The committee issued two additional subpoenas to Sessions and Wray on late Tuesday.

“Resort to compulsory process was necessary because of DOJ’s and FBI’s insufficient responsiveness to the committee’s numerous Russia-investigation related requests over the past several months,” the letter said.

If the committee is unable to obtain documents or testimony, Nunes wrote, the committee “expressly reserves its right to proceed with any and all available legal options,” including a House vote to hold Sessions and Wray in contempt.

The dossier attracted public attention in January when it was revealed that then-FBI Director James Comey had briefed Trump, soon before he was inaugurated as president, about claims from the documents that Russia had amassed compromising personal and financial allegations about him.

It’s unclear to what extent the allegations in the dossier have been corroborated or verified by the FBI because the bureau has not publicly discussed it.

Rep. Adam Schiff, the top Democrat on the Intelligence Committee, said on MSNBC Tuesday evening that the subpoenas were issued over the objections of Democrats. Schiff said Republicans are working harder to discredit those who compiled the dossier than to find out if the allegations in it are true. He said Republicans should be more focused on getting documents from the White House.

The subpoenas were first reported by the Washington Examiner.