Technology Testing Probe to Help Cancer Surgeons Know They Got It All
Health, Science & Technology 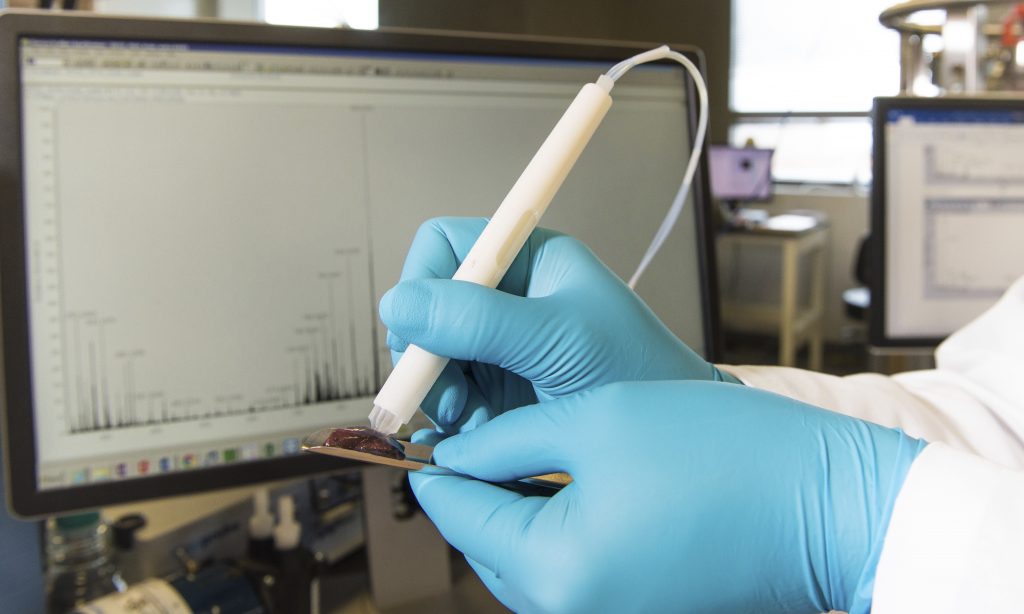 Patients emerging from cancer surgery want to know, “Did you get it all?” Now scientists are developing a pen-like probe to help surgeons better tell when it’s safe to stop cutting or if stray tumor cells still lurk.

The device is highly experimental, but laboratory tests show it uses molecular fingerprints to distinguish between cancerous cells and healthy ones far faster than today’s technology, Texas researchers reported Wednesday.

“That’s really anyone’s worst nightmare, to go through surgery and know there’s a chance” some cancer remains, said assistant chemistry professor Livia Eberlin of the University of Texas at Austin, who is leading the work. “By providing real-time molecular information, we could really improve accuracy.”

Her team aims to begin testing the device during surgeries, starting with certain cancers, early next year.

When surgeons think they’ve removed all of a tumor, they often also remove a thin layer of surrounding tissue, called the margin, to be sure no cancer cells linger at the edge and increase the risk of relapse.

The problem: That check takes time, for pathologists to process the tissue and examine it under the microscope. For certain especially tricky tumors, surgeons sometimes pause for a half-hour to more than an hour, the patient still under anesthesia, to await the results. For certain cancers, often the answer doesn’t arrive until a few days after surgery, raising the possibility of repeat operations.

In contrast, “our device is able to give an immediate read-out in under a minute,” said UT research engineer Noah Giese.

How it works: Cells produce unique sets of small molecules that perform various functions — and thus also act as fingerprints. Researchers place the pen-like device directly onto tissue, press a foot pedal to switch it on, and a tiny amount of water emerges to gently pull molecules from the cells in that spot.

A tube carries the droplet to a machine called a mass spectrometer that identifies molecules by calculating their mass. Software then immediately analyzes whether the resulting fingerprint matches cancer or healthy tissue.

In lab tests of samples that had been taken from 253 patients with certain tumors, the so-called “MasSpec Pen” was more than 96 percent accurate in diagnosing cancer, researchers reported in the journal Science Translational Medicine. They also successfully used the pen during a handful of operations on mice.

Surgeons need new tools to catch residual cancer in the operating room, and developing molecular techniques to try is a hot new field, Ahuja said. While she stressed that the hand-held pen needs lots more research to prove if it really works, she said it might be easier to use than some other candidates under development.

If it pans out, doctors would have to place the pen on multiple spots to check an entire wound. Researchers noted it doesn’t appear to harm tissue, meaning pathologists still could double-check with standard techniques when human testing begins.