Israel Rivlin in Munich: “We Will Always Remember Those Hours”
Israel 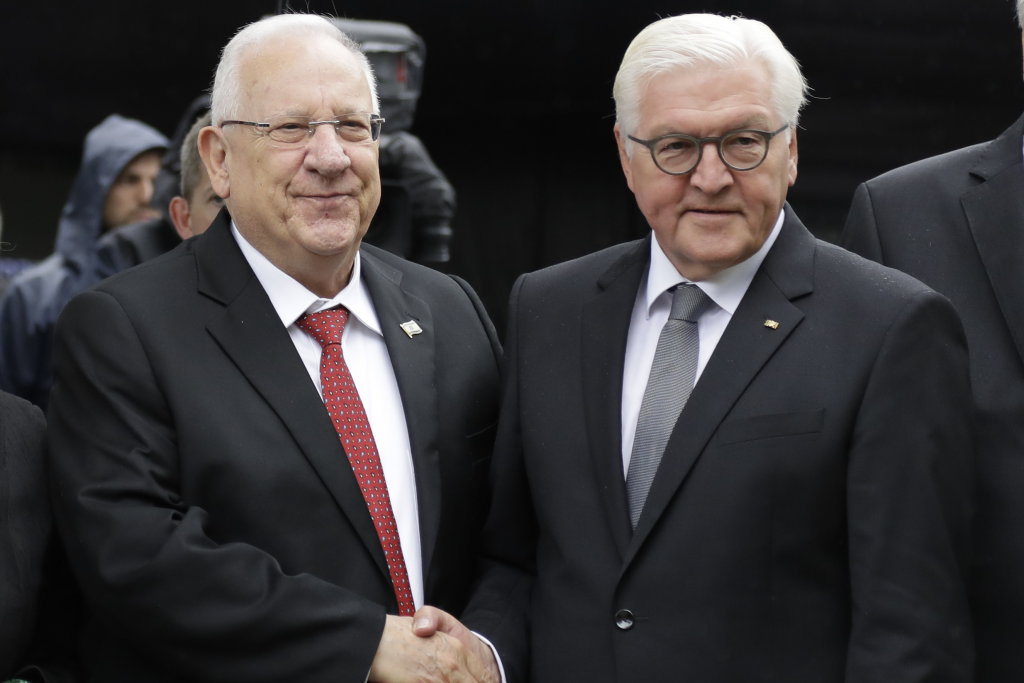 Speakers at the memorial ceremony on Wednesday for the Israeli athletes murdered in the Olympics in Munich in 1972 recalled the pain and anguish of those days and conveyed the message that the story of that tragedy is not yet over.

Israeli President Reuven Rivlin told the gathering, which included members of the bereaved families and officials of the German government:

“…In one moment, the Olympic Village [was] transformed into a killing field. The Olympic flag stained with blood. The interwoven rings — the symbol of brotherhood and unity — torn from their place. The Munich Olympics were the Olympics of blood.

Rivlin stressed that the Munich massacre is not an event in the remote past but very much connected to the present, and that not everyone shares in grief over those who slain by PLO terrorists.

“Forty-five years after the massacre, international terrorism continues to threaten and to strike against innocent civilians. There are still those who see in the murder…a heroic deed. Just last year Fatah marked the massacre as an ‘act of heroism.’”

Rivlin also recalled what he termed the “injustice” of the International Olympic Committee’s refusal to allow a minute of silence for the victims at the quadrennial Olympics. The IOC has turned down repeated requests from the families on the ground that it would amount to “politicizing” the Games.

Bavarian Minister of Education, Science and the Arts, Ludwig Spaenle, said, “Members of the families, the memorial site has been designed to describe the fracture in your lives, and in the existence of the whole world, that was caused by an act of terror. Your loved ones will be engraved in our memories forever, and the fact that we were not able to safeguard them is a shame for us forever.”

“We could not prevent their deaths, that is why we want to give you this place of remembrance,” Spaenle said.

“This is a milestone … giving the life story of the victims and their families,” he said after each of the names of the eleven Israelis and the one German police officer were announced.

President of Germany, Frank-Walter Steinmeier, also acknowledged that Germany bore a grave responsibility for what happened.

“The Olympics’ organizers had been responsible for the security of those coming from around the world, but in fact did not succeed in providing security for Israel. The security was placed below the desire to ease of access.

“This was not a good moment in Germany, nor in Munich. They wanted to portray a Germany that was open and free, and this failed in the most tragic way possible. The global village was transformed into a stage for Palestinian terrorism. A stage which bestowed worldwide attention on the dissemination of fear and horror. A stage for endless hatred of Israel and Israelis.

“It was forbidden that this should have happened. But here, I can speak also of the present, in which there are still people who are not afraid to express their hatred against Israel. There are still people who wish to trample on our freedom with terrorism, and the means at their disposal are cruel like none other. We have also experienced terrorism in recent years. We must confront it and strengthen our resolve. The dangers of terrorism are great, but our resolve is greater. We are determined to defend our way of life.”

Ilona Romano noted that the atrocity perpetrated in 1972 was perceived at the time as a unique crime against Israelis, but that it has gradually come to be understood as an early landmark in a worldwide scourge of terrorism.

“We are standing here in the place our loved ones stood 45 years ago…They were killed by wicked murderers, and returned home in coffins. Then, they said that we Israelis had brought terrorism on to German soil, since it was just against Israelis.

“Forty-five years have passed, and we all here know that terror targets the whole world. If we had only understood then that the murder in the Olympic Village would be terrorism’s opening shots at the whole world.

“At this time, we feel the deep pain, but also a feeling of fulfillment and gratitude for the establishment of the museum. We feel that the memory of the athletes will not be forgotten. We thank Chancellor Merkel for her commitment to the remembrance of this tragedy. Thank you to the Minister-President of Bavaria who promised to establish a museum, and did so.”

In Israel, Haaretz noted that the memorial itself “makes no mention whatsoever of the omissions, failures and ultimate responsibility of Germany for the disaster. Germany is thus missing another historic opportunity to take responsibility for its part in the weaknesses in security, defense and intelligence that enabled the massacre.”

The paper also recalled that five years ago, Der Spiegel ran a cover story revealing a list of omissions and mistakes by the German authorities before, during and after the attack, and accused the government of a cover-up. Among the security failures was the lack of response to credible warnings they had received a month before the event.

The memorial was essentially the result of decades of lobbying on the part of the bereaved families for a permanent remembrance.

It occupies a large exhibition area carved into a grass mound, described as “creating the effect of an open wound.” A triangular column in the center of the memorial displays the biographies and photos of those killed on panels with texts in German, Hebrew and English. A large LED screen plays a 27-minute loop of news footage broadcast during the events of 1972.

The memorial cost 2.35 million euros ($2.8 million). Funding came primarily from the State of Bavaria, the German federal government, the City of Munich and the International Olympic Committee.

A “school of democracy” will eventually be located in the tower at the Fürstenfeldbruck airport, the site of the fatally botched rescue attempt.