WWII Vet Had an Isolated Life — and A Sadder Death 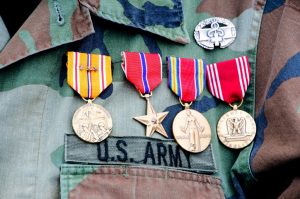 The lonely life and death of Arthur Moorehand held a mystery for me that seemed like it would never be solved.

In 2009, I attended Moorehand’s burial at Arlington National Cemetery. He was 80. He lived in Southeast Washington. He’d served as a sergeant in the U.S. Army during World War II. He had reportedly died of natural causes.

The odd part was that his body had remained unclaimed at the D.C. morgue for nearly a year. No kin or friends showed up for the graveside ceremony, just a small group of caring strangers.

Getting old, I got that. But dying friendless, seemingly kinless and alone in a house where days go by before anybody notices you’re dead? The prospect is terrifying. Only Moorehand knew why he suffered such a fate — and he’d taken the mystery with him to the grave.

Then, a few weeks ago, I learned that his next of kin had finally been located.

Michael Zwick, a private investigator and president of Assets International, discovered last year that Moorehand had left a $40,000 life insurance policy that no one had cashed in. His firm tracked down the beneficiaries — a niece living in New Jersey and a nephew in Alabama.

I spoke with the nephew, Wallace Moorehand, a 65-year-old minister in Birmingham, Alabama.

“It really hurt that I didn’t know he had died — that no one knew,” he said. “But that’s just the way the Moorehand family is. For some reason, we don’t stay in touch like we should.”

The words had a sting to them. I had heard them before — from members of my own family. Does anybody really stay in touch with the elderly members of our families, in our neighborhoods, “like we should”?

AARP reported this month that 43 percent of people over age 65 report being lonely, and the numbers are growing. Moreover, the health effects of chronic social isolation can be more damaging to your health than obesity — or even smoking cigarettes, the report said.

“It’s a fact of life,” said AARP report, “unfortunately families can drift apart over the years due to a number of reasons. Instead of living in the same town, perhaps you’ve scattered across the country or to the other side of the globe. Or maybe daily life has just gotten in the way and the pressures of raising a family and balancing a career has kept you from keeping in touch as much as you’d like.”

That’s probably true, but do they really sound like good excuses for not phoning the grandparents?

“Thankfully, modern technology and social media networks are making the world smaller and, ultimately, easier to keep connected to relatives — both immediate and distant, as well as those who live near and far,” the AARP report said.

But don’t get confused: Being on [social media] is not the same as being close. When elderly people fall down, they can’t rely on a virtual friend to help them get back up.

Wallace Moorehand said he wasn’t close to his uncle. We all have relatives like that — “distant cousins,” is one way they are described. He had no photographs to share or stories to tell.

But after thinking about it, he did recall one:

“We were living in the Bronx, and one day he took me for a ride in this big green truck to see a military base,” he said. “I was in the front seat with him, sitting on a pillow so I could see out of the window. It was 1959. I was 6 years old.”

He also recalled the last time he saw his uncle. It was about 15 years ago. Arthur Moorehand had searched for his nephew and found him in Birmingham.

“He told me, ‘We need to be closer as a family. We need to get together more often.’ And I never heard from him again.”

We will never know what Arthur Moorehand thought of that unfulfilled promise. But we can imagine what it must be like to be in his nephew’s shoes.

Have you ever found out some interesting tidbit about an elderly relative or friend and wanted to know more? And now they’re gone. You waited too long.

The elders may be hurt that you didn’t reach out sooner, but we are the ones who are deprived of their wisdom.

Wallace Moorehand said he let his sister have the money from the insurance policy. She works at a hospital and needed it more than he did.

The sister is no doubt grateful for the gift. But as the minister knows, money doesn’t necessarily bring people closer.

According to a study published in a recent Social Work Today, nearly half of the elderly people who report being lonely are married. Just being in a relationship is not enough — it has to be a meaningful one.

With the discovery of Arthur Moorehand’s nephew and niece, the mystery has been solved. The case, as it turned out, hadn’t been so much about why Moorehand had become so isolated. It was about what we all can do to keep others from that fate.