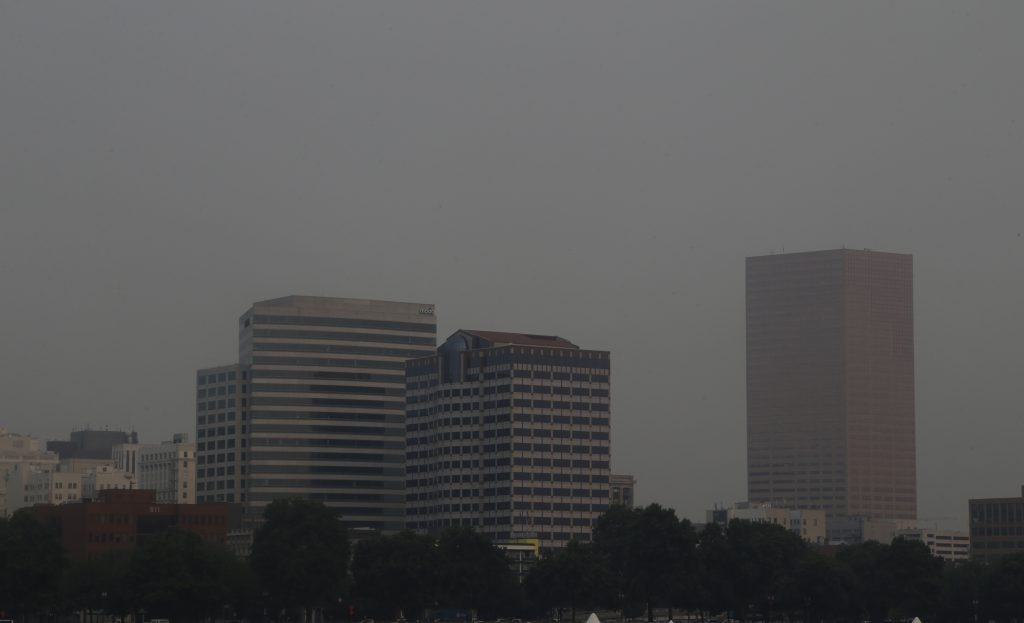 Firefighters across the U.S. West struggled with wind-driven flames, hot temperatures and dry conditions even after the unofficial end to a summer of devastating wildfires, including those bearing down on two popular national parks.

The dozens of fires burning across the western United States and Canada have blanketed the air with choking smoke from Oregon, where ash fell on the town of Cascade Locks, to Colorado, where health officials issued an air-quality-advisory alert.

A 14-square-mile fire in Montana’s Glacier National Park emptied its busiest tourist spot as wind gusts drove the flames toward the doorstep of an iconic lodge.

Firefighters on Monday were keeping the blaze in check about a mile from the lodge, though the fire expanded elsewhere in the park and had burned 21 square miles.

Lake McDonald Lodge, a 103-year-old Swiss chalet-style hotel, sits on a lake as the famed Going-to-the-Sun Road begins its vertigo-inducing climb up the Continental Divide, making it an endearing park symbol for many visitors.

Fire crews got bad news Monday: The wind had shifted and gusts were driving the fire down the mountainside toward the lake’s shores.

Losing Lake McDonald Lodge on top of the destruction of Sperry Chalet, a historic backcountry building consumed by the fire last week, would be “unimaginably devastating,” said Mark Hufstetler, a historian who worked at the lodge for several years in the late 1970s and early 1980s.

“These are some of the most remarkable buildings anywhere in the United States and they are an integral part of the Glacier experience and the Glacier tradition,” Hufstetler said.

Fire crews understood the significance of the lodge and were ready to protect it, fire information officer Diane Sine said.

“It’s important to all of us and a very high priority to do whatever we can to preserve that,” she said.

Outside California’s Yosemite National Park, a wind-fueled fire made its way deeper into a grove of 2,700-year-old giant sequoia trees on Labor Day. Officials said the fire had gone through about half the grove but had not killed any trees.

Giant sequoias are resilient and can withstand low-intensity fires. The blaze burned brush and left scorch marks on some big trees that survived, said Cheryl Chipman, a fire information officer.

“They have thick bark and made it through pretty well,” Chipman said.

There are about 100 giant sequoias in Nelder Grove, including the roughly 24-story-high Bull Buck sequoia, one of the world’s largest. Fire crews also wrapped 19th-century cabins in shiny, fire-resistant material to protect them from the flames.

The fire threatening the grove was among several in the area — one of which closed some trails in Yosemite. A road leading to the park’s southern entrance also shut down.

Brenda Negley woke up Monday in her Oakhurst home 14 miles away and found her truck covered with ash. Her mother was there, too, after evacuating her own home, but Negley’s thoughts were with the peaceful and secluded sequoia grove that she has regularly visited since childhood.

“I’ve been sick with worry over Nelder Grove,” she said. “As much as Nelder Grove is my home, and I don’t want to lose my home, I want to save my mom’s home and everyone else’s home.”

Elsewhere in Northern California, a fire destroyed 72 homes and forced the evacuation of about 2,000 people from their houses. The fire has burned 14 square miles in the community of Helena about 150 miles south of the Oregon line.