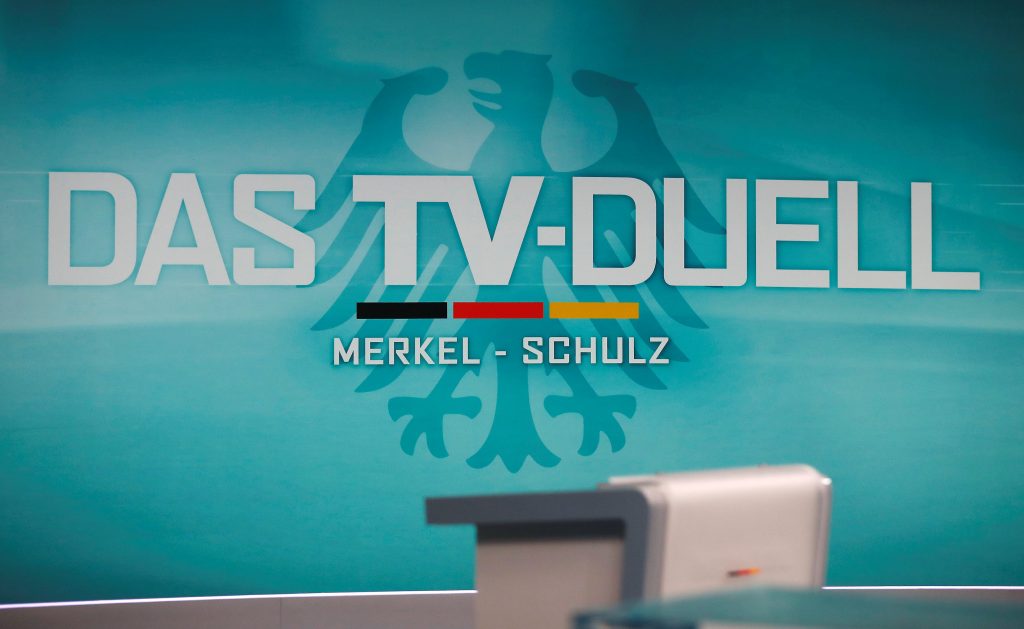 German Chancellor Angela Merkel and her center-left rival, Martin Schulz, locked horns over how to deal with Turkey in their only broadcast debate Sunday, three weeks before the country’s general election.

Schulz, a former president of the European Union’s legislative body, said he would end talks with Ankara about joining the bloc because of Turkish President Recep Tayyip Erdogan’s increasingly authoritarian policies.

Merkel, who has previously expressed doubts about Turkey ever joining the EU, refused to commit to the same move, but sharply criticized Erdogan’s rule, saying that “Turkey is departing from all democratic practices at breakneck speed.”

“Whether we slam the door shut or Turkey does that is something we’ll have to see,” she said, adding that any move would need to be coordinated with other European countries.

“I don’t plan to break off diplomatic relations with Turkey because we have to outdo each other a little bit during the election campaign to see who is tougher,” Merkel said.

Relations between Germany and Turkey have soured in recent years. Ankara accuses Germany of harboring terrorist opposition groups and Berlin has slammed Turkey for a recent crackdown on dissidents and the arrest of several German citizens.

The issue was a rare moment of tension in what was otherwise a measured debate between Merkel and Schulz. Both candidates have run lackluster campaigns so far, prompting yawns from political commentators, with Germany’s respected news weekly Der Spiegel depicting Merkel on its front page Saturday asleep in a boxing ring, with a tiny Schulz standing timidly behind her and the headline “Wake up!”

Much of the debate was taken up with the issue of migrants, with Merkel saying she stood by her decision to allow hundreds of thousands of refugees into Germany in 2015 and insisted the country can’t isolate itself from the effects of wars and poverty elsewhere in the world. Schulz largely backed the move, saying only that it should have been better coordinated with other European countries.

The decision to open Germany’s borders boosted the nationalist Alternative for Germany party, which is expected to enter Parliament for the first time as a result of the Sept. 24 vote.

In her pitch to voters, Merkel touted her 12 years of experience as the leader of Europe’s biggest economy, citing Germany’s low unemployment rate and pledging not to raise the pension age to 70. Merkel also stressed that she would stick to her longtime policy of choosing international cooperation over confrontation, including with U.S. President Donald Trump.

“We have serious differences with the American president,” Merkel said, citing among other things Trump’s response to the far-right march in Charlottesville, but added that the world needs the U.S. if it is to tackle conflicts in Iraq and Afghanistan, climate change and North Korea’s nuclear weapons program.

Telephone polls following Sunday’s debate put Merkel ahead of Schulz, though in Germany the chancellor is elected by parliament. Schulz’s Social Democratic Party has been trailing Merkel’s center-right Union bloc in all recent opinion surveys. During the debate, both candidates refused to rule out continuing their current grand coalition at the national level after the election.