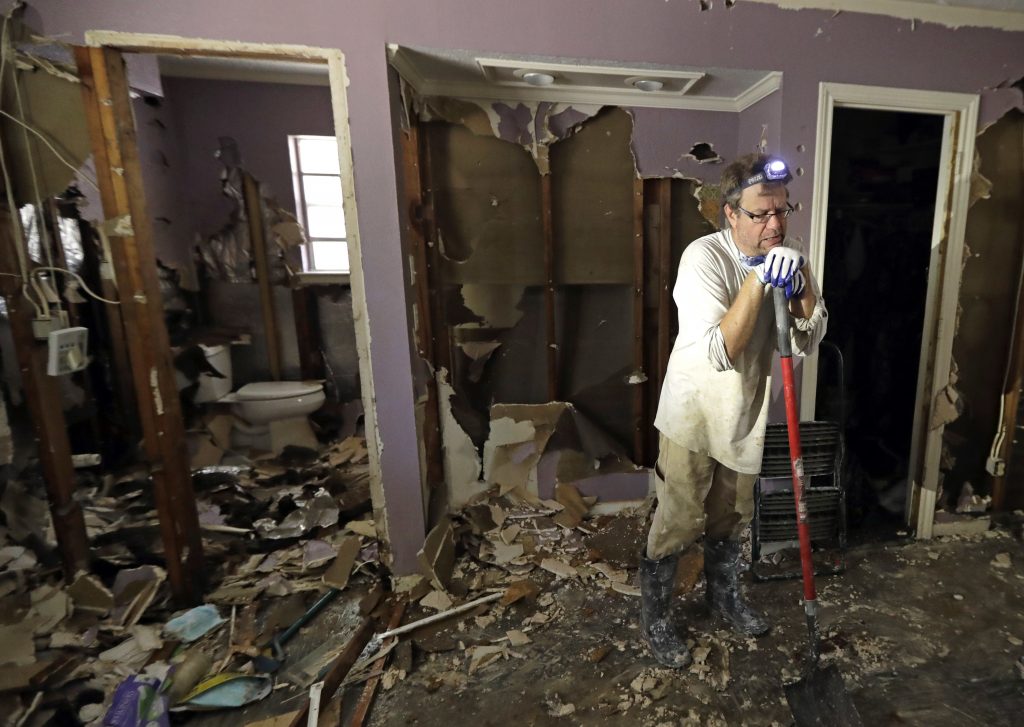 Authorities launched a controlled burn Sunday at a chemical plant damaged by Harvey that had already seen several explosions, saying highly unstable compounds inside needed to be neutralized.

Officials announced “proactive measures” to ignite the six remaining trailers at the Arkema plant in Crosby, outside Houston, but said doing so wouldn’t pose any additional risk to the community. People living within a mile and a half of the site are still evacuated.

Video broadcast Sunday afternoon showed small flames burning in charred structures at the plant, with a limited amount of light gray smoke. John Rull, who lives close by, told the Houston Chronicle he heard two booms and saw thick smoke. He said the explosions were louder than one he heard Friday when two containers burned and that there was much more smoke.

“There are ways to accelerate the process or create more efficient or complete burning,” Mannan said. … “That’s why you are seeing much a lighter-colored smoke.”

Three trailers containing highly unstable compounds had already caught fire at the plant after backup generators were engulfed by Harvey’s floodwaters, which knocked out the refrigeration necessary to keep the organic peroxides from degrading and catching fire.

Some Houston officials stressed that the recovery from Harvey was beginning, and Mayor Sylvester Turner proclaimed America’s fourth-largest city “open for business.” But the on-the-ground reality varied by place.

Utility crews went door-to-door shutting off power and warning those still in some waterlogged homes in western parts of the city that still more flooding could be heading their way — not from rain but from releases of water in overtaxed reservoirs. At least 4,700 Houston dwellings were under new, mandatory evacuation orders, though about 300 people were thought to be refusing to leave.

Near the town of Liberty, northeast of Houston, some in outlying areas had yet to even return to their homes.

“This will last for some people for months, if not years,” said Liberty Fire Chief Brian Hurst.

Contradictions could be seen as well in those with damaged homes taking a break from their cleanup efforts in the sweltering heat to worship on a declared National Day of Prayer, while others worried about thefts in storm-ravaged neighborhoods.

President Donald Trump has asked Congress for a $7.9 billion down payment toward Harvey relief and recovery efforts — a request expected to be swiftly approved when lawmakers return to work Tuesday. Texas Gov. Greg Abbott suggested the cost of recovery could be as much as $180 billion.

Turner insisted, however, that much of the city was hoping to get back on track after Labor Day.

“Anyone who was planning on a conference or a convention or a sporting event or a concert coming to this city, you can still come,” the mayor said on the CBS show “Face the Nation.” ”We can do multiple things at the same time.”

But in the southwest Bellaire neighborhood, police received reports of scavengers picking through water-damaged possessions and urged those cleaning up to keep anything left outside to dry closer to their homes and separate from what was considered a total loss. In the suburb of Dickinson, one homeowner used orange spray paint on a sheet of dirty plywood to warn: “Looters Will B Shot.”

Robert Lockey, a 48-year-old school district bus monitor, worked to clean up his flooded home in Spring, Texas, outside Houston, in the 94-degree heat. A pile of wooden doors lay in his yard next to ripped-out drywall.

“They’re sweating to death,” Lockey said, looking at his neighbors and their similar piles of debris.

Added Elizabeth Hallman: “This definitely is not fun.”

Meanwhile, repairs continued on the water treatment plant in Beaumont, about 85 miles from Houston, which failed after the swollen Neches River inundated the main intake system and backup pumps halted. In the nearby town of Vidor, Pat Lawrence and her fiancé, Jim Frasier, hopped on a tractor, the only way they could make it to services at the Church.

“You can’t hardly comprehend all the water that’s around,” Lawrence said. “I’ve been in my house since last Saturday, not left the place until today.”

Sunday was declared a day of prayer in Texas and across the nation. Outside Liberty, about 45 miles from Houston, dozens of people were still cut off by the swollen Trinity River. Maggie King and her two children greeted a Texas National Guard helicopter that landed at the local fire department with pallets of drinking water.

“It’s so far from over,” King said. “There’s so much more that has to be repaired from here.”