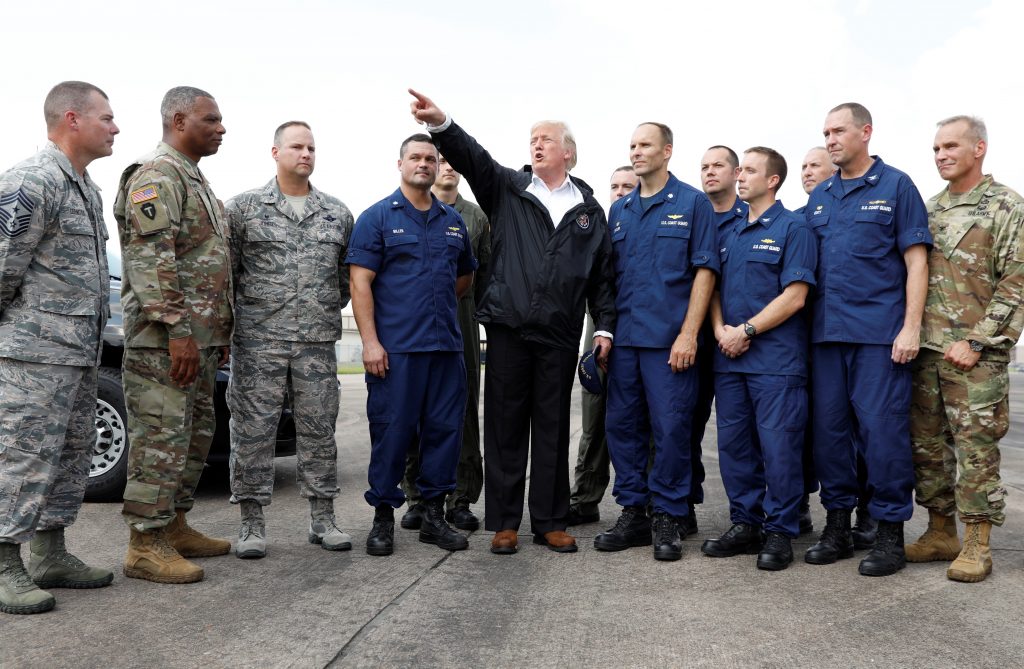 President Donald Trump arrived in Houston on Saturday to meet with victims of Hurricane Harvey after a week of historic flooding in the area claimed at least 40 lives and displaced more than 1 million people.

President Trump visited a Houston relief center on Saturday to meet with some of the thousands of Texans forced out of their homes by severe flooding triggered by Harvey, one of the most powerful storms ever to hit the United States.

Visiting the devastated state for the second time in a week, the president and his wife, Melania Trump, were greeted warmly on an unannounced stop to NRG Stadium, a convention complex converted into a center to assist storm evacuees.

The visit gave the president an opportunity to show a warm and empathetic side to victims of the worst storm to hit Texas in 50 years.

Harvey came on the 12th anniversary of Hurricane Katrina, which killed about 1,800 around New Orleans. Then-President George W. Bush’s administration was roundly criticized for its botched early response to the storm, and the Trump administration appeared intent on avoiding such a misstep.

Later on Saturday, the Trumps traveled on to Lake Charles, Louisiana, an area hammered by the storm after pummeling the Houston area with more than 50 inches of rain and leading to the deaths of at least 40 people.

The storm, one of the costliest to hit the United States, has displaced more than 1 million people, pushed river levels to record highs and knocked out the drinking water supply in Beaumont, Texas, a city of 120,000 people.

After Hurricane Harvey came ashore last Friday, much of the damage took place in the Houston metropolitan area, which has an economy about the same size as Argentina’s.

Seventy percent of Harris County, which encompasses Houston, at one point was covered with 18 inches or more of water, county officials said.

In the Harris County area of Clear Creek, the nearly 50 inches of rain that fell there equated to a once in a 40,000 year event, said Jeff Lindner, meteorologist with the county Flood Control District.

When Trump visited the Gulf of Mexico coastal region on Tuesday, he met with state and local leaders and first responders, largely focusing on the logistics of the government response rather than the suffering of residents.

In a letter to Congress on Friday, the Trump administration asked for a $7.85 billion appropriation for response and initial recovery efforts. White House Homeland Security Adviser Tom Bossert has said funding requests for aid would come in stages as more became known about the impact of the storm.

Texas Governor Greg Abbott, who accompanied the president on his visit to the Houston relief center, has said his state may need more than $125 billion.

The storm, which lingered around the Gulf Coast for days, dumped record amounts of rain and left devastation across more than 300 miles of the state’s coast.

In the city of Lake Jackson, south of Houston, officials late on Friday ordered additional evacuations of homes near the lake as the city struggled with flooding streets.

While much of the region’s refining infrastructure still remained offline from Harvey, the restarts were a first step in alleviating concerns about U.S. fuel supplies.

Exxon Mobil Corp said on Saturday it was restarting its 560,500 barrel per day (bpd) facility in Baytown, Texas, America’s second-biggest oil refinery, after it was inundated by flooding.

Phillips 66, meanwhile, said it was preparing to resume operations at its storm-hit 247,000 bpd refinery in Beaumont, Texas.

The announcements come after Citgo Petroleum Corp said on Friday it would restart its 157,500 bpd refinery in Corpus Christi, Texas.

Retail gasoline prices have risen more than 17.5 cents since Aug. 23, before the storm began, amid worries the storm would trigger supply shortages.

Pump prices were at $2.59 a gallon on Saturday, according to motorists advocacy group AAA, up 3 percent from Friday and 16.7 percent higher on average than a year ago.

In Latin America, the largest buyer of U.S. fuels, oil companies have been scouring the globe to find other supplies of gasoline and distillates to compensate for the U.S. Gulf Coast refinery outages.

In another positive sign for the oil industry, Occidental Petroleum Corp said it had reopened its Ingleside, Texas, crude export facility, near where Hurricane Harvey first made landfall last week. The facility is a key export hub for Permian Basin oil producers.

In some Texas cities, including Dallas, there were long lines at gas stations on Friday.

Nearly half of U.S. refining capacity is in the Gulf Coast region, an area with proximity to plentiful crude supplies from Texas oil fields and also Mexican and Venezuelan oil imports. Most major Texas ports remained closed to large vessels, limiting discharge of imported crude.

“The refineries were built on the Gulf Coast with the idea that we’re going to import,” said Sandy Fielden, director of oil and products research at Morningstar in Austin, Texas.

“That’s why we’re having problems today because that’s where they were all built.”

The reduced availability of fuel forced the Colonial Pipeline, which provides fuel from refineries near the Gulf of Mexico to the U.S. Northeast, to reduce supplies.

But some crude oil pipelines had restarted. Magellan Midstream Partners announced late Friday that it resumed operations on its BridgeTex and Longhorn crude oil systems. The two pipelines transport around 675,000 bpd of West Texas crude to East Houston.

The company said it expected to resume service on its Houston crude oil distribution system over the weekend.

As of Saturday, the volume of offshore U.S. Gulf of Mexico crude production still shut in had declined to about 106,000 bpd.