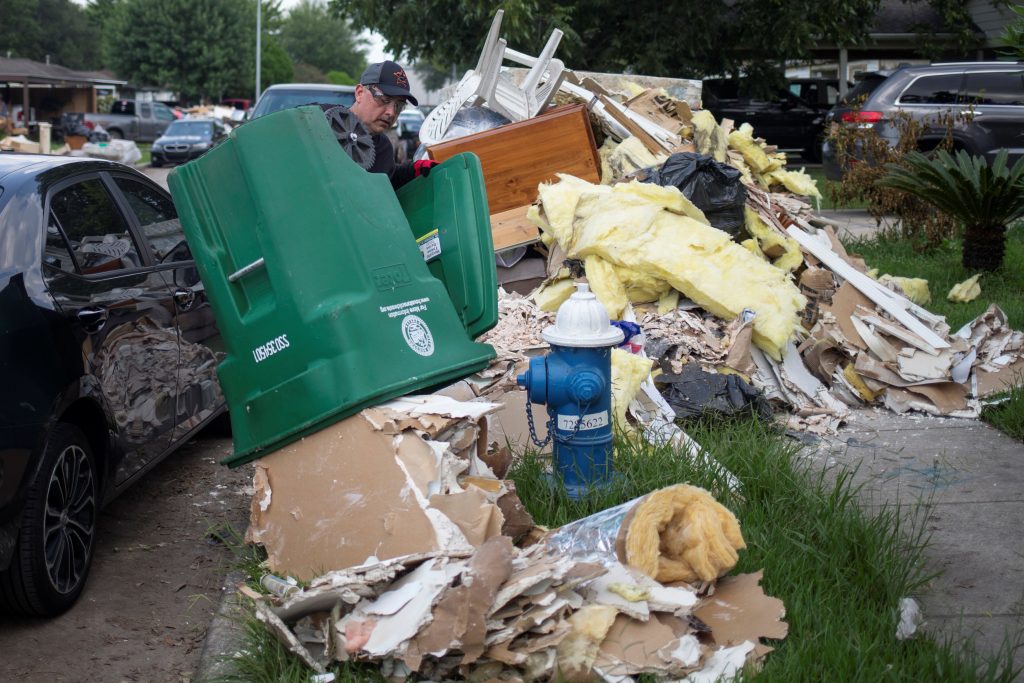 Harvey did not discriminate in its destruction.

It raged through neighborhoods rich and poor, black and white, upscale and working class. Across Houston and surrounding communities, no group sidestepped its paralyzing deluges and apocalyptic floods.

“Harvey didn’t spare anyone: The whole city is traumatized,” said Lynnette Borrel, whose backyard pool filled with murky water and schools of minnows from Brays Bayou on the city’s southwest side not far from downtown.

Far to the northeast edge of the sprawling city, a flotilla of boats rescued affluent residents of the pine forest villages of charming Kingwood — psychologists, doctors, business owners. And on the far west side, the release of storm water from the Addicks and Barker reservoirs pushed a devastating tide into some of Houston’s more wealthy neighborhoods. Clear across town to the southeast, low-slung brick and clapboard homes in the heavily African-American and Hispanic Lockwood area were swamped. Missouri City, home to Houston’s largest Asian population, endured more than 40 inches of rain.

Houston Mayor Sylvester Turner, fearing that a full-fledged evacuation of the nation’s fourth-largest city in the face of the oncoming storm would be dangerous, advised residents to remain in place. So when Harvey submerged roughly 70 percent of the land mass in Harris County, all demographics were inundated.

The poor tend to suffer most in disasters. After Hurricane Katrina in 2005, the world was left with nightmarish images of residents of New Orleans’ impoverished Lower Ninth Ward, screaming for help from their rooftops. That storm, which claimed 1,800 lives, stands as a prime example of urban inequality and environmental injustice.

And there is every expectation that Houston’s poor and working class, lacking the resources of the affluent, will struggle most to rebuild.

But in this moment, as the waters begin to recede, Houston residents of all colors and socio-economic statuses find themselves united in their loss, their despair — and their resilience.

Lois Rose, a 55-year-old school teacher in northwest Houston, knew she had to leave her home in the east when the rising floodwater in her living room began lapping at her calves. Outside, it nearly reached her neck. She and her panicked neighbors formed a human chain, battling against the push of brown water and powerful currents to make their way to a gas station on higher ground. Frightened and shivering, they waited in the dark and in 3 feet of water for seven hours before they were rescued.

Rose’s home of 25 years, in a predominantly African American and Hispanic area, had been flooded by a storm twice before. But when she was taken to the city’s primary disaster shelter, all she had to do was look around to realize that Harvey was something else entirely.

“Every nationality you could see was in the George R. Brown Convention Center,” she said. “Harvey hit everywhere. It’s not just one section of Houston where people were displaced. It’s everywhere, from southwest to northwest, southeast to northeast. It hit the lowest-income areas to the richest. It just didn’t stop. This was just different. It’s going to take years to recover from this.”

Rose returned home on Thursday. Her parlor, where she puzzled out problems she had with her students, was ravaged; her beloved antique lamps with fringed shades and ceramic statues of women in flowing robes were ruined, as were her chairs, couches,and clothes,.

Her eyes were glassy when she spotted the topper to her wedding cake in the corner, soaked through.

“Part of me wants to cry,” she said. “The other part of me knows I need to pull myself up.”

Down the block, welder Ivy Anderson also came home to find his house and belongings destroyed. As the storm raged, he’d carried his mother on his back through the treacherous flood, and watched his home fill up with water he knew would cause horrible damage. The house had flooded during Tropical Storm Allison in 2001, but he had flood insurance back then. Not this time.

Twenty-two miles away, in the Meyerland neighborhood of quiet, leafy streets, Barron Lozano picked through her own wreckage. Flood insurance is required to get a mortgage in Meyerland, she said, and it’s been an invaluable safety net.

Lozano and her husband, an architect, left before the storm hit — she didn’t want to take the chance of getting stuck. Last year, her home flooded on Tax Day — 10 inches. The year before, it flooded on Memorial Day — 20 inches. They’d been back in the house after their most recent remodel for just six weeks before Harvey.

Outside her home, its insides were piled high: new chairs, a new couch, a top-of-the-line refrigerator, just purchased.

“We just don’t know what we’re going to do,” she said, pausing to take stock. “The scale of this is absolutely unbelievable: It’s hard for us, but it’s harder to look around and see that everybody else has flooded, too. Insurance is huge — we wouldn’t be able to rebuild it if we didn’t —but we don’t know if we want to go through this again.”

In Edgebrook, near South Houston, Spanish tunes leaked out of a sound system on Lakewood Drive, as families slowly made their way home. The sun baked the sidewalk; bit by bit, it evaporated water still pooling in the gutter.

Patricia Hahn, an administrator for a dialysis company, sat in the back of a pickup truck in her driveway. Beside her were plastic bins and boxes, filled with whatever she could salvage from inside — books and DVDs, photographs, odds and ends in plastic bags.

The pile was modest, compared to her refuse. Her wardrobe. A pair of brand new La-Z-Boy recliners she’d ordered back in 2016, delivered just two months before the storm; she’d even kept them wrapped in plastic. A green couch that had belonged to her husband, Curtiss. He died three years ago on Nov. 7, the couple’s shared birthday. She hung her head and quietly cried.

A native of Houston, Hahn said she’s only ever received a few inches of water in the garage, even in the fiercest storms: “Never in my life, never ever in my life, has this house had this much water.”

Hahn rode out the storm on the second floor, while water rushed into the first. As neighbor after neighbor waded through chest-deep water, Hahn kept a watchful eye over her neighborhood. But when the floodwaters receded, she realized that she had almost nothing left. Even the boxes of her late husband’s belongings that she’d tucked away as mementoes were destroyed.

“This has been a hard reset for me,” she said through tears. “It’s always been hard for me to go through his stuff. Now it’s gone.”

“I, more or less, have lost everything,” she said. “But I have to face up to my challenges.”

She doesn’t have flood insurance, but is determined to recover. Houston will too, she said.

“This storm affected the poor, the rich, and those in the middle,” she said, “but our Texans, our community, we’re going to do whatever it takes.”