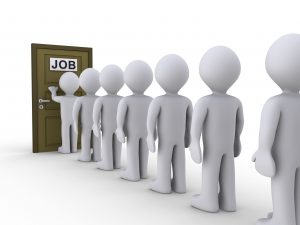 The nation’s unemployment rate edged back up to 4.4 percent, from 4.3 percent in July. The jobless figure is calculated from a separate household survey, and by this measure the economy did not generate enough new work opportunities in August to meet the growth in the working-age population.

Friday’s report also had little cheery news on the pay front. The average workweek for all employees slipped a fraction to 34.4 hours last month. Manufacturing workers put in less overtime. And average hourly earnings rose just 3 cents last month to $26.39, down from the 9-cent increase in July. Compared with a year ago, the average pay in August was up 2.5 percent — the same modest pace in recent months.

“August’s employment report was disappointing across the board,” said Paul Ashworth, the chief U.S. economist for Capital Economics.

He said that one’s month data, especially coming in a summer month when seasonal factors can play a role, wasn’t by itself likely to alter the Federal Reserve’s plans to rein in its easy-money policies by starting to sell some bonds and raise interest rates one more time this year.

Still, the latest report adds to the uncertainty, and the devastation of Tropical Storm Harvey only makes things more cloudy.

Labor Department officials Friday made it clear that Harvey, which has pounded southeast Texas over the last week, had no effect on the jobs report because data were collected earlier in the month. But economists expect initial unemployment claims to jump over the next few weeks as many businesses and workers have been immobilized by the devastating storms in Houston and across the Gulf Coast.

Harvey also could have a modest effect on the employment numbers in September, by some estimates reducing national job growth by 30,000 next month. Though that isn’t much, it nonetheless won’t help a labor market that is losing steam.

There were bright spots in the August jobs report. Manufacturing employment rose a brisk 36,000 jobs, much of that coming in auto manufacturing, a sector in which payrolls can be volatile in the summer as companies retool their plants. Construction hiring also surged by 28,000, after flat activity in the prior five months.

Employment in business and professional services and health services had decent growth as well. But other sectors had little or no growth, including those in leisure and hospitality, retail and transportation and warehousing.