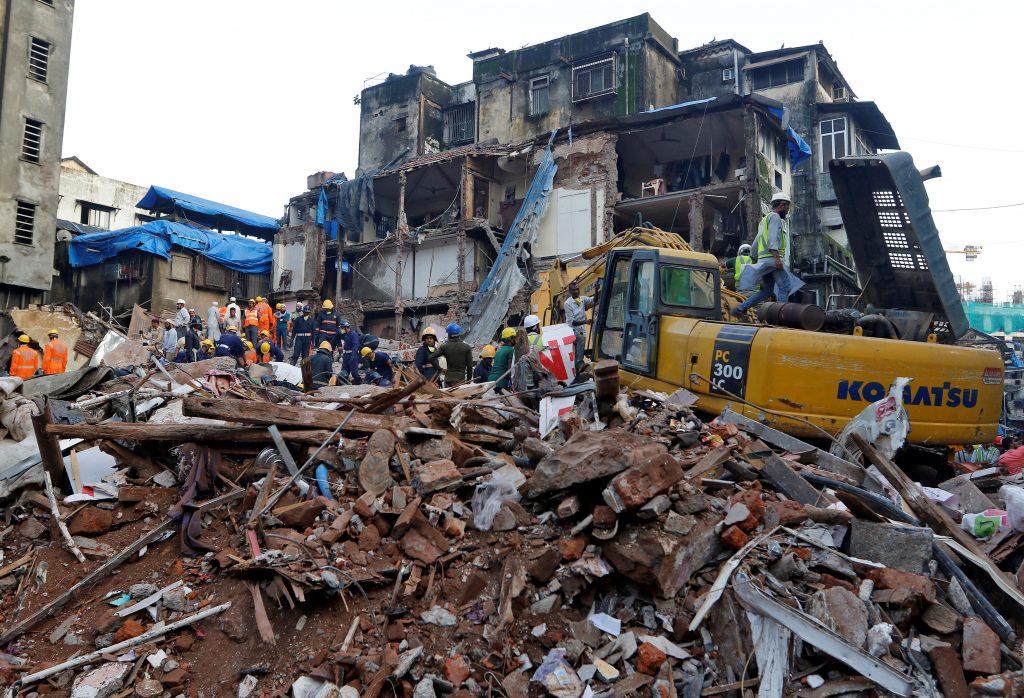 An 117-year-old condemned building collapsed in the Indian financial hub of Mumbai on Thursday after torrential rains this week, killing at least 22 people, with about 10 other people feared trapped, police and fire official said.

Officials added rescuers were able to pull 35 people from the debris of the six-story building, 13 of whom were injured.

Disaster struck early in the morning as Mumbai was recovering from two days of heavy rain and flooding in which 14 people died.

The collapse was the second in Mumbai in little over a month. In late July, 17 people were killed when a four-story building collapsed after suspected unauthorized renovation work.

“There was a massive bang. We couldn’t see anything due to the dust and smoke. Once the dust settled, we realized it was a building collapse,” said area resident Amina Sheikh.

The building, in a densely-populated part of the city, housed a nursery school despite being declared unsafe by the municipal housing authority in 2011 though no children had arrived at the school when the collapse occurred.

But there were many families living there.

Relatives pleaded with rescuers to help find their loved ones as about 200 police and fire personnel searched debris for dead and injured.

Police have yet to establish what caused the collapse near Crawford market, a landmark of south Mumbai’s old city with narrow streets packed with markets and shops which has a large Muslim community.

Prime Minister Narendra Modi, in a statement of condolences, said the event was “saddening.”

The building housed a sweet shop warehouse on the ground floor, and the chief fire official said the collapse had sparked a fire that may have suffocated some of the victims.

Devendra Fadnavis, the chief minister of the state of Maharashtra, said the government had given final notice for the building’s demolition in May 2016, but added some families had refused to leave.

The building was among 791 that the city’s municipal corporation had listed as dangerous, but residents often refuse to leave, and as a result, only a few of these buildings have been evacuated or demolished.

More than 500 of them are still occupied, an official of the Brihanmumbai Municipal Corp told Reuters.

A housing trust that was looking to redevelop the area said the housing board had offered alternative accommodation to tenants, but only seven families had moved out by early 2014.

Some residents in the area said people had not been given proper details of what type of new housing they would be provided, making them reluctant to leave.

“We also want redevelopment of our building, but developers or government should make alternate arrangements until redevelopment work completes or it should pay rent,” said Ati Allah, 60, whose grandfather bought a small room more than 100 years back in a neighboring old building.

“We don’t have any problem. But there is no clarity how the government wants to do redevelopment.”