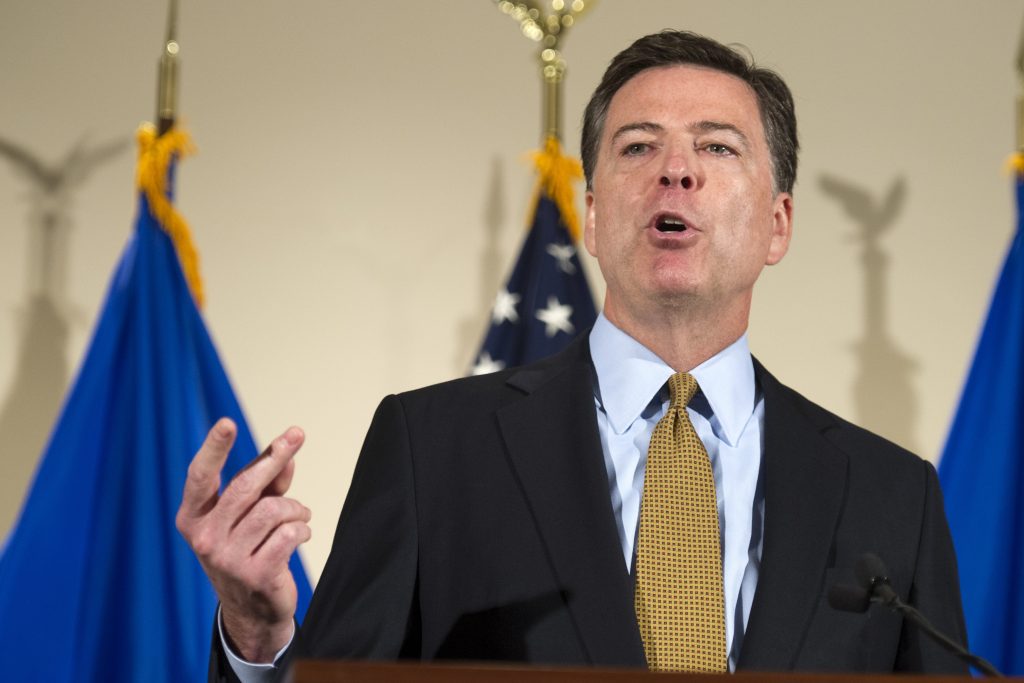 Sens. Chuck Grassley, R-Iowa, and Lindsey Graham, R-S.C., sent a letter to FBI Director Christopher Wray on Thursday after reviewing transcripts of interviews by the Office of Special Counsel of two FBI officials close to Comey. Grassley chairs the powerful Senate Judiciary Committee and Graham is a senior committee member.

“It appears that in April or early May of 2016, Mr. Comey had already decided he would issue a statement exonerating Secretary Clinton,” the senators said in a letter sent Wednesday to Wray.

“That was long before FBI agents finished their work. Mr. Comey even circulated an early draft statement to select members of senior FBI leadership. The outcome of an investigation should not be prejudged while FBI agents are still hard at work trying to gather the facts.”

The senators, in a statement Thursday, described the interviews as “heavily redacted,” but their statement said it was still possible to see that “they indicate that Comey began drafting a statement to announce the conclusion of the Clinton email investigation” before “up to 17 key witnesses including former Secretary Clinton and several of her closest aides” had been interviewed.

“Conclusion first, fact-gathering second — that’s no way to run an investigation. The FBI should be held to a higher standard than that, especially in a matter of such great public interest and controversy,” he said.

The FBI said its policy is that any comment on the letter would go to Grassley and Graham.

Sen. Sheldon Whitehouse, D-R.I., said Republicans were not the only people with questions about Comey’s actions.

“As I have said before, I have serious concerns with James Comey’s decision to break department protocol by releasing derogatory investigative information about an uncharged person, and the cascade of errors that ensued,” he said.

Other Democrats on the committee did not immediately respond to requests for comment.

Comey announced on July 5, 2016, that the FBI would not be pursuing criminal charges against Clinton for her use of a private email server with state department emails.

“Although there is evidence of potential violations of the statutes regarding the handling of classified information, our judgment is that no reasonable prosecutor would bring such a case,” Comey said at the time.

He pledged that “What I can assure the American people is that this investigation was done competently, honestly and independently. No outside influence of any kind was brought to bear.”

The announcement was an important political event, coming just before the parties’ nominating conventions. Clinton had clinched the Democratic presidential nomination, but was facing resurgent Republicans who were about to nominate Donald Trump.

Trump fired Comey on May 9. Comey at the time was the very public face of an investigation into the Trump campaign and possible collusion with Russia during the 2016 campaign. After firing Comey, Trump would say it was a decision in part based on “the Russia thing.”

The Russia investigation is now being conducted by Special Counsel Robert Mueller III.

A statement accompanying the Grassley-Graham letter notes: “The draft statement also came before the Department entered into immunity agreements with Cheryl Mills and Heather Samuelson where the Department agreed to a very limited review of Secretary Clinton’s emails and to destroy their laptops after review.”

Mills was a top aide to Clinton at the time. Samuelson, an attorney and former Clinton campaign worker, reportedly reviewed Clinton’s emails before they were kept as federal records, determining which were purely personal.

The letter includes portions of what it says appears to be an interview with James Rybicki, Comey’s chief of staff.

The question: “And so at that point in time, whether it was April or early May, the team hadn’t yet interviewed Secretary Clinton — ”

Question: “I guess, based on what you’re saying, it sounds like there was an idea of where the outcome of the investigation was going to go?”

Later, the transcript indicated that the questioner asked, “And so at that point in time, whether it was April or early May, the team hadn’t yet interviewed Secretary Clinton?”

Another transcript, described as what appears to be an interview with Trisha Anderson, principal deputy general counsel of national security and cyberlaw for the FBI, quotes the interview subject saying, “The idea, I’m not entirely sure exactly when the idea of the public statement um first emerged. Um it was, I just, I can’t put a precise time frame on it um but (redaction). And then I believe it was in early May of 2016 that the director himself wrote a draft of that statement.”

When asked how she knew he had written a draft, she responded “(Redacted) gave me a hard copy of it.”

The senators’ letter goes on to state that “It is unclear whether the FBI agents actually investigating the case were aware that Mr. Comey had already decided on the investigation’s outcome while their work was ongoing.”

But the letter asks that by Sept. 13, Wray provide the committee with Comey’s statement, from original draft through final version, as well as other information on records on the Clinton investigation and a now closed Hatch Act investigation of Comey.