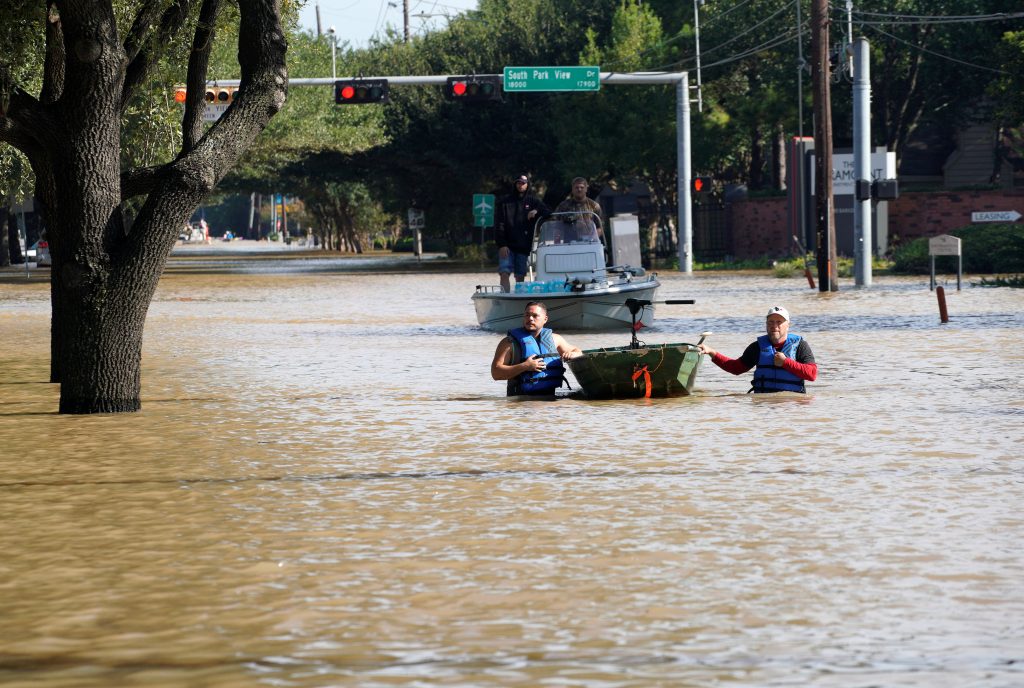 Tropical Storm Harvey, which devastated Texas’ Gulf Coast, spread to neighboring Louisiana on Wednesday, while the U.S. energy hub of Houston remained paralyzed by a record rainfall that also drove tens of thousands of people from their homes.

Slow-moving Harvey has killed at least 20 people and sent 30,000 to shelters since coming ashore on Friday near Corpus Christi, Texas, as the most powerful hurricane to hit Texas in more than 50 years. On Wednesday it went on to swamp a stretch of coast from Port Arthur, Texas, to Lake Charles, Louisiana.

Harvey was forecast to drop another 3 to 6 inches of rain on Wednesday, with a storm surge of up to 4 feet along the western part of Louisiana’s Gulf Coast. The floods shut the nation’s largest oil refinery in Port Arthur, Texas, in the latest hit to U.S. energy infrastructure that has sent gasoline prices climbing.

As much as 10 inches of rain was expected in places, according to the National Weather Service.

About 300 people who had fled their homes around Lake Charles packed into a civic center that served as an emergency shelter.

The shelter was bracing for about 1,500 people rescued from floods by the U.S. Coast Guard, said Angela Jouett, who is running the shelter. The newcomers would represent almost double the shelter’s capacity of 800 beds, she said.

One shelter resident, Edward Lewis, 54, said he awoke from a deep sleep on Monday night in his home in Lake Charles, swung his legs out of bed and landed in ankle-deep water. He flagged down a passing rescue boat and spent the rest of the night at a church before being taken on a city transit bus to the Lake Charles civic center on Tuesday.

“No one has said when we can go home,” he said.

In Beaumont, northeast of Houston, a woman clutching her baby daughter was swept away in raging flooding. The baby was saved but the mother died, Beaumont police said.

Harvey made landfall for a third time early on Wednesday, and was about 30 miles north of Lake Charles, Louisiana, near the Texas border at 11 a.m. ET with winds up to 45 miles per hour.

Clear skies in Houston on Wednesday brought relief to the fourth-largest U.S. city after five days of downpours, although people leaving shelters faced new anxieties about the condition of the homes they had fled.

Handyman Mike Dickerson, 52, carried a grocery bag of his possessions through Houston’s streets as he tried to figure out how to make it back to his home, which was waist-deep in water the last time he saw it.

“A lot of people are going back now because everything looks dry around here. But people who lost everything have nowhere to go and are still at the convention center,” Dickerson said. “They are just telling everyone to call FEMA, tell them about the damage.”

As of Wednesday morning, Texas officials said close to 49,000 homes had suffered flood damage, with more than 1,000 destroyed. Some 195,000 people have begun the process of seeking federal help, FEMA said.

Texas is investigating hundreds of complaints of price gouging involving loaves of bread offered for $15, fuel for $100 a gallon and hotels raising room rates, the state’s attorney general said on Wednesday.

U.S. President Donald Trump visited Corpus Christi and Austin on Tuesday to survey damage from the first major natural disaster to test his crisis leadership and discuss the response with state officials.

“After witnessing first hand the horror & devastation caused by Hurricane Harvey, my heart goes out even more so to the great people of Texas!” Trump said on Twitter on Wednesday.

The storm made it less likely that Trump would act on his threat to shut the federal government over funding for a border wall, Goldman Sachs economists said on Wednesday. They now estimate the probability of a shutdown at 35 percent, down from 50 percent previously.

The storm has affected nearly one-fifth of U.S. refining capacity, sparking concerns about gasoline supply. The national average gasoline price rose to $2.404 a gallon, up six cents from a week ago, with higher spikes in Texas.

Confirmed fatalities in Houston included Police Sergeant Steve Perez, a 34-year veteran of the force who drowned while attempting to drive to work.

In all, 20 people have died, according to government officials and the Houston Chronicle.

U.S. Coast Guard helicopters and boats have rescued more than 4,000 people. Thousands of others have been taken to safety by police, rescue workers and citizen volunteers.

The National Hurricane Center on Tuesday afternoon said a record 51.88 inches of rain had fallen in Texas due to Harvey, a record for the continental United States.