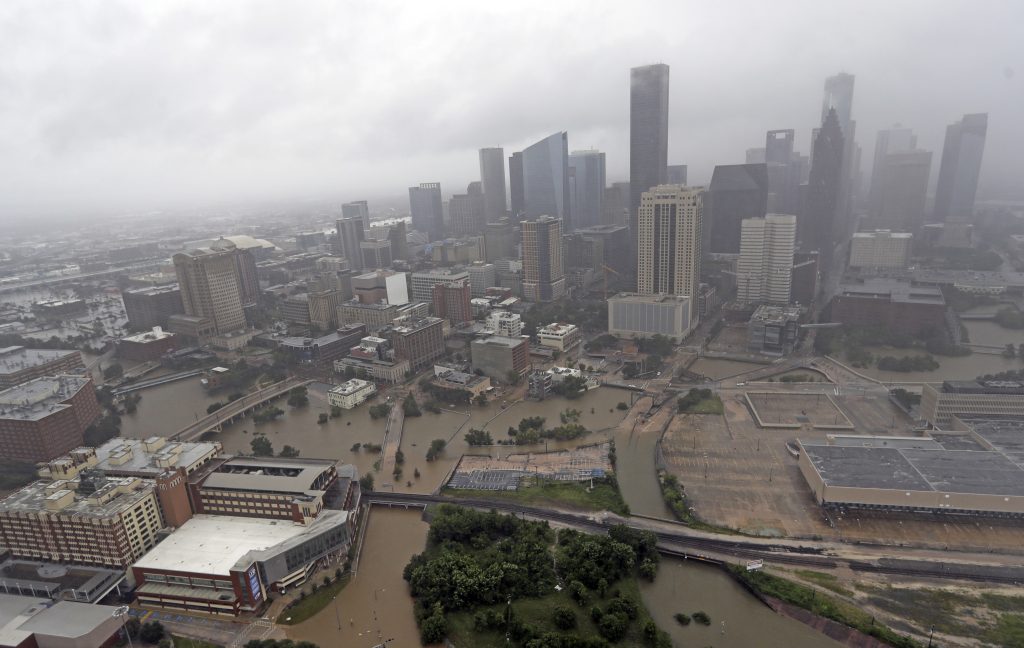 Tropical Storm Harvey made landfall again on Wednesday near the Texas-Louisiana border, adding more rain after a record downpour that has caused catastrophic flooding and paralyzed the city of Houston.

The storm that first came ashore on Friday as the most powerful hurricane to hit Texas in more than 50 years has killed at least 17 people, forced tens of thousands of people to leave deluged homes and caused damage estimated at tens of billions of dollars, making it one of the costliest U.S. natural disasters.

There is some relief in sight for Houston, the fourth most populous U.S. city, with forecasters saying five days of torrential rain may come to an end as the storm that has lingered in the Gulf of Mexico picks up speed and leaves the region later in the day.

Harvey was expected to produce an additional 6 to 12 inches of rain to the north and east of Houston as it moves into southwestern Louisiana. It is projected to weaken as it moves inland to the northeast and be over Mississippi by Thursday, the National Weather Service said.

“We aren’t going to be dealing with it for too much longer. It’s going to pick up the pace and get out of here,” said Donald Jones, a meteorologist at the National Weather Service in Lake Charles, Louisiana.

But nearly a third of Harris County, an area 15 times the size of Manhattan and home to Houston, was underwater, according to the Houston Chronicle newspaper. It may take days for all floodwaters, which have spilled over dams and pushed levees to their limits, to recede, local officials said.

City officials were preparing to temporarily house some 19,000 people, with thousands more expected to flee. As of Tuesday morning, nearly 50,000 homes had suffered flood damage, Texas officials said, and the tally is certain to rise.

President Donald Trump visited Texas on Tuesday to survey damage from the first major natural disaster to test his leadership in a crisis. The president said he was pleased with the response, but it was too soon for a victory lap.

“We won’t say congratulations,” he said. “We don’t want to do that…We’ll congratulate each other when it’s all finished.”

Moody’s Analytics is estimating the economic cost from Harvey for southeast Texas at $51 billion to $75 billion.

The unprecedented flooding has left scores of neighborhoods chest-deep in water and badly strained the dams and drainage systems that protect the low-lying Houston metropolitan area whose economy is about as large as Argentina’s.

Harvey has drawn comparisons with Hurricane Katrina, which devastated New Orleans 12 years ago, killing 1,800 people and causing an estimated $108 billion in damage.

Former President George W. Bush was widely criticized for his administration’s handling of the response to that disaster, taking a heavy toll on public support of his administration, and Trump clearly was aiming to avoid a similar reaction.

Among the confirmed fatalities was Houston Police Sergeant Steve Perez, a 34-year veteran of the force who drowned while attempting to drive to work on Sunday.

In all, 17 people have perished, according to government officials and local media.

U.S. Coast Guard air units and boats have rescued more than 4,000 people. Thousands of others have been taken to safety by police, rescue workers and citizen volunteers who brought their boats to help, local officials said.

The National Hurricane Center (NHC) on Tuesday afternoon said a record 51.88 inches of rain has fallen in Texas due to Harvey, a record for any storm in the continental United States.

This breaks the previous record of 48 inches set during tropical storm Amelia in 1978 in Medina, Texas, the NHC said. Medina is west of San Antonio. The island of Kauai was hit with 52 inches of rain from tropical cyclone Hiki in 1950, before Hawaii became a U.S. state.