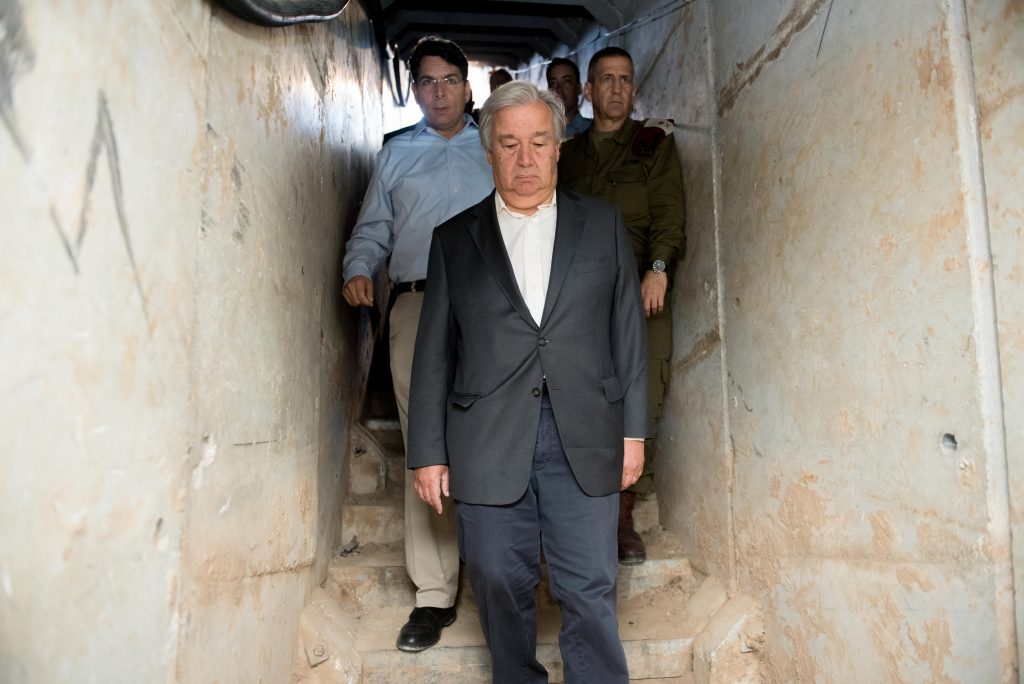 U.N. Secretary-General Antonio Guterres wound up his three-day visit with trips to southern Israel, a Hamas terror tunnel and the Hamas-run enclave of Gaza on Wednesday.

Guterres was accompanied on a helicopter shuttle to the Gaza border by Israel’s Ambassador to the U.N. Danny Danon and IDF Deputy Chief of Staff Aviv Kochavi, who briefed on him the security challenges in the region.

“Hamas continues to arm itself in order to harm Israel as it exploits the generous humanitarian aid provided by the international community,” Danon told the Secretary General. “Instead of working to ensure a better future for their children, Hamas has turned the residents of Gaza into hostages, and is investing its resources into digging murderous terror tunnels.”

On the ground, Guterres was led through a Hamas terror tunnel uncovered by the IDF prior to Operation Protective Edge in 2014, and met with residents in Kibbutz Nahal Oz.

Afterwards, in remarks at The Museum of the Jewish People at Beit Hatfutsot, Guterres said he was impressed by the families of Nahal Oz who provide “a fantastic example of solidarity, of humanity, of tolerance that I want to pay tribute to here publicly today.”

“I had the enormous pleasure when talking to the families of the kibbutzim to note that instead of what would be natural—a feeling of anger in relation to what is an attack on civilians and a violation of international humanitarian law—I’ve seen from them an extraordinary message of peace and reconciliation,” he said, “asking us to help the Palestinians in Gaza to overcome their tragic humanitarian problems and being themselves ready to help and to provide support to the Palestinian community in Gaza.”

Guterres decried the fact that the community has “been bombarded several times” and that “one child has been killed by rockets.”

Raising the issue of anti-Semitism, Guterres who is a former prime minister of Portugal, said that he was ashamed that his own country “is marred by this history.” He called the expulsion of the Jews from Portugal in the 16th century a “hideous crime that caused tremendous suffering.” In addition, “it was also a colossally stupid act that deprived Portugal of much of the country’s dynamism, and led to long periods of cultural and economic stagnation.”

He recalled that in the 1990s the Portuguese parliament revoked the expulsion edict. “This was an admittedly symbolic act, but the spirit of repentance was genuine,” he said.

In Gaza, at a press conference at an UNRWA school in Beit Lahiya he said that what he saw in Gaza was “one of the most dramatic humanitarian crises that I have seen in many years working as a humanitarian in the United Nations.”

Guterres issued an appeal for Palestinian unity, saying that the division between Ramallah and Gaza “only undermines the cause of the Palestinian people.”

He also called for a lifting of the blockade around Gaza, and to “avoid the buildup of [terrorism] that can undermine the confidence” between Israel and the Palestinians.

The blockade is maintained by Israel in order to keep weapons and missile and tunnel-building materials out of the hands of Hamas and other terrorist groups.