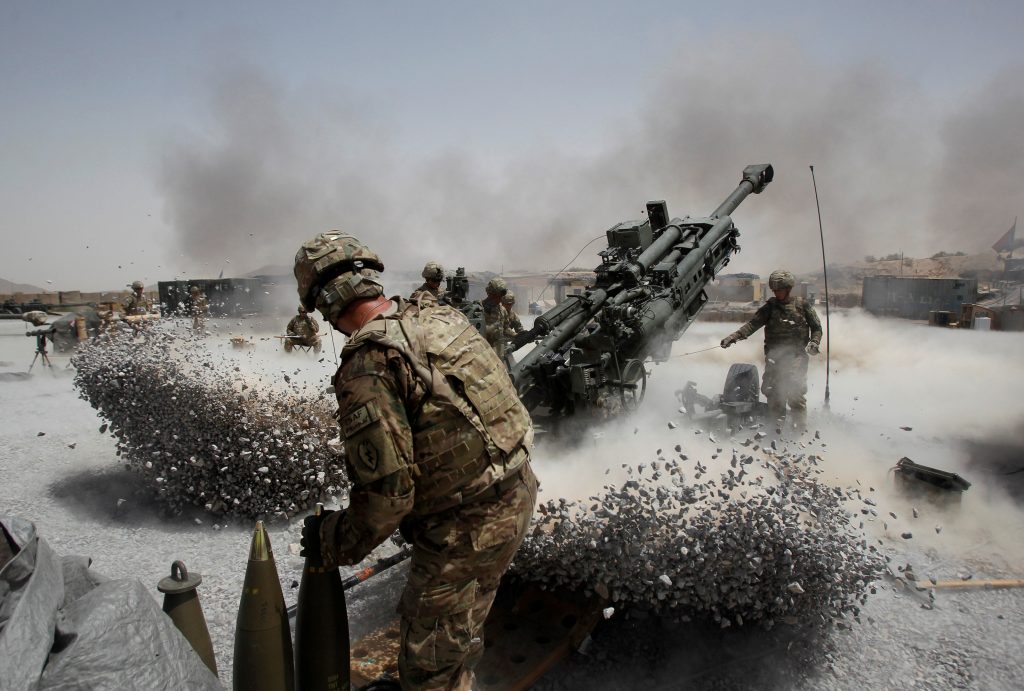 The bulk of the roughly 4,000 additional troops headed to Afghanistan will probably be composed of thousands of paratroopers from two units – the 82nd Airborne Division and an airborne brigade from the 25th Infantry Division, according to U.S. officials.

More air support – in the form of F-16 fighters, A-10 ground attack aircraft and B-52 bomber support, or a combination of all three – is also probably on the way, according to a U.S. official, who spoke on the condition of anonymity to discuss plans that had not yet been made public. The B-52s will remain based in Qatar but will be tasked to cover Afghanistan.

Small Marine artillery detachments, composed of about 100 or so troops per unit, will be spread around the country to fill in gaps in air support, the official said.

While President Donald Trump announced his new strategy for Afghanistan last week, his statement had little detail and did not mention troop numbers.The Pentagon has yet to make any announcement about the coming deployments as the final orders have yet to be approved by Chairman of the Joint Chiefs of Staff Gen. Joseph Dunford and Defense Secretary Jim Mattis, the officials said. As the Pentagon delays signing off on the troop increase, the availability of certain units could change.

About half of the 82nd Airborne’s 1st Brigade Combat Team is already in Afghanistan, while the rest of the unit – around 1,500 troops – is waiting to join them as a part of the troop increase. The 4th Brigade of the 25th Infantry Division, based in Alaska, is set to relieve parts of the Army’s 1st Armored Division already in the country. To contribute to the troop increase, the 4th Brigade is likely to deploy more of its troops rather than send just enough to replace those in the 1st Armored Division. Fox News first reported the 82nd Airborne’s deployment last week.

During a recent visit to Kabul, Gen. Joseph Votel, the officer who oversees U.S. operations in the Middle East and Afghanistan, told reporters that he was hoping to get some of the new forces into the country before the end of the fighting season. While in Afghanistan’s warmer climes the fighting season usually lasts almost year-round; clashes elsewhere in the country usually taper off by the end of October.

It is unclear why the Pentagon has delayed authorizing the additional troops even though Trump made his announcement. On Monday, Pentagon spokesman Army Col. Rob Manning said Mattis had directed Dunford “to put together a plan to achieve the strategic goals of the president’s strategy.” A spokesman for the National Security Council did not respond to a request for comment.

In 2009, when President Barack Obama authorized the surge of 30,000 troops to Afghanistan, units were notified of their deployments almost immediately. In that instance, the units were deploying at full strength to conduct standard combat operations. In the case of Trump’s surge, the units being tasked to deploy are going to advise Afghan troops.

The Pentagon says there are currently about 11,000 troops in Afghanistan. At the war’s height in 2011, there were more than 100,000 U.S. troops on the ground. More than 2,000 Americans have died in Afghanistan since the United States invaded the country in 2001. Ten U.S. troops have been killed by hostile fire so far in 2017.

Now with a relatively small force, the U.S. military and NATO counterparts are spread across the country trying to advise the Afghan military while marshaling enough air support to ensure Taliban terrorists are held at bay. There are also more than 20,000 contractors in Afghanistan, according to a July report from the Pentagon. Those civilians do everything from aircraft maintenance to base security and are an integral part of the American war effort in the country. With more troops, those numbers are sure to increase as well.

The additional U.S. forces will allow Americans to advise Afghan troops in more locations and closer to the fighting, U.S. officials in Kabul said ahead of Trump’s announcement. With more units farther away from the country’s biggest bases, additional air support and artillery will be needed to cover those forces.