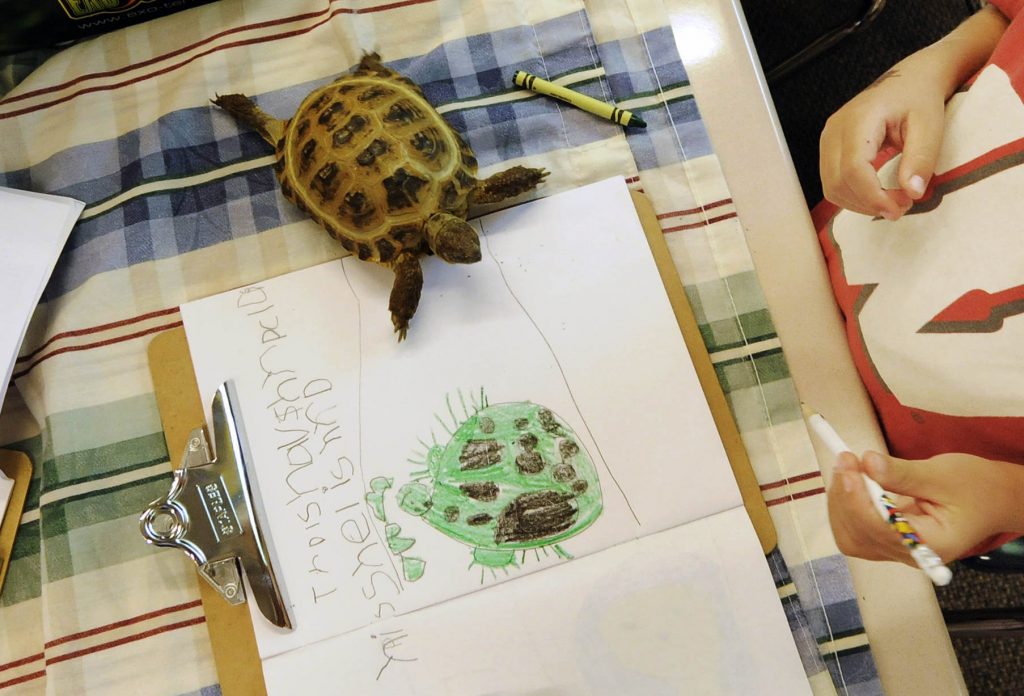 Investigators trying to figure out why dozens of people across 13 states have been stricken with salmonella poisoning have stumbled on the reason behind the outbreak: Adorable tiny pet turtles.

People started getting sick on March 1, according to a statement on the outbreak by the Centers for Disease Control and Prevention. In five months, as the outbreak spread, 16 people were hospitalized. Twelve of the sick were children ages 5 or younger.

Doctors and researchers started asking questions of the victims and found that six had bought a turtle from a flea market or a street vendor – or had received a turtle that turned out to be a salmonella-harboring gift.

Although this may not come as a surprise to anyone suspicious of murky green aquarium water, turtles aren’t exactly the healthiest pets.

The health dangers from turtles are so serious that federal law prohibits selling or distributing turtles with a shell length less than four inches.

All turtles shed salmonella in their droppings, the CDC says, and salmonella can end up on their shells or skin – or in the water they swim in.

Children are especially at risk, because, as The Post’s Dina ElBoghdady wrote in 2012, “kids couldn’t resist kissing the toylike reptiles or placing them in their mouths, sometimes contaminating themselves with the salmonella commonly found on turtles.”

To prevent people from getting sick, the CDC published a handy, kid-friendly fact sheet, telling people “don’t kiss or snuggle with your turtle. This can increase your risk of getting sick.”

Not everyone got the message.

Through genome sequencing of the Salmonella agbeni bacteria at the heart of this most recent outbreak, scientists have learned that the bacteria turtles harbor is very similar to the bacteria that sends humans running to the restroom or the hospital.

“This close genetic relationship means that people in this outbreak are more likely to share a common source of infection,” the CDC’s statement said.

Although both humans and turtles can harbor the bacteria, it doesn’t make turtles sick, according to the CDC. Humans usually get the common symptoms of salmonella infection: abdominal cramps, fever and diarrhea. Most people feel better within five to seven days. Deaths are rare, and none have been reported with this outbreak.

It’s not just turtles. Pet reptiles in general seem to be suspect, according to the CDC.

Reptiles are responsible for 70,000 cases of salmonella-related illness every year, the CDC estimates, including a few major outbreaks in recent years: Pet crested geckos sickened 22 people in 2015. A year earlier, bearded dragons sidelined 166 people. And in 2011, water frogs infected 241 people.

Most reputable pet shops are aware of the dangers – and are consistently inspected.

But, as ElBoghdady wrote, investigators have tried to crack down on a “thriving black market” of suspect pets, including turtles raised on farms and sold at flea markets.

“In Maryland, authorities have seized about 500 undersize turtles in the past year,” she wrote in 2012. “They’ve busted two turtle vendors in Montgomery County in the past two weeks: One for selling the turtles to a Silver Spring store; the other for hawking them at the Six Flags parking lot.”