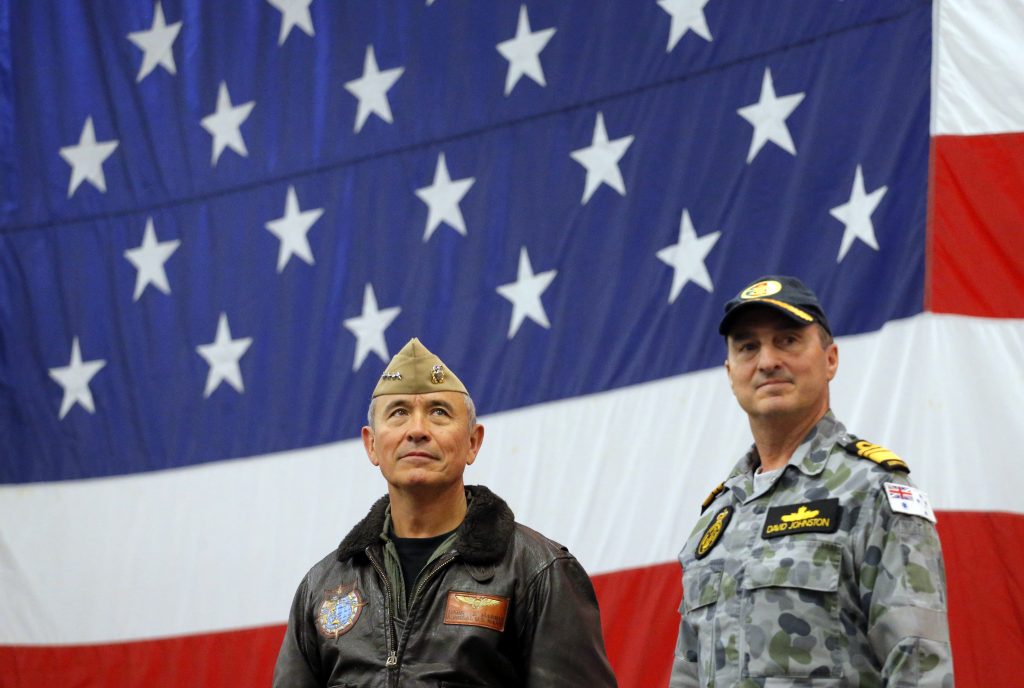 The Trump White House is considering naming America’s top military commander in the Asia-Pacific region to be ambassador to Australia, a key diplomatic post in a time of high regional tension. The move would reassure a key ally and strengthen the administration’s Asia team, which remains full of vacancies.

Adm. Harry Harris, the commander of U.S. Pacific Command (PACOM), is in the last year of his three-year tour. He is set to retire early next year, but he could move from Hawaii to Canberra if the Trump administration appoints him as U.S. ambassador there. Three administration officials told me that Harris is being discussed for that role, although no decision has been made.

Harris has visited Australia several times as PACOM commander and has relationships with both the political and military leadership there. U.S. officials say the Australian government is growing more and more concerned that President Trump has yet to appoint an ambassador there, more than seven months into the administration.

“Admiral Harris is a frequent visitor to Australia. He’s well-known to Australians, highly respected. I’m sure his appointment would be welcomed by both sides of politics,” said Andrew Shearer, senior adviser on Asia-Pacific security at the Center for Strategic and International Studies. “He’s a straight-talking, engaging kind of bloke and that’s how Australians like it.”

In the past, the Australia post has often but not always gone to a political appointee without national security or foreign policy experience. Before he resigned, White House Chief of Staff Reince Priebus favored Trump fundraiser Rod Gidwitz for the post, officials said. Shearer said now is not the time for a novice.

“Australia is grappling with some of the issues involved in China’s rise and is looking for reassurance from the United States in that context,” he said. “Harris knows us, he knows our region, and he knows the issues we are grappling with. That would certainly be an advantage.”

Known to take a tough line on dealing with China, Harris’ appointment was pushed strongly by former White House chief strategist Stephen Bannon. Harris has also been discussed for other senior roles in the administration, officials said.

Harris has been a strong proponent of increasing the U.S. operations that are meant to respond to Chinese maritime aggression, including the militarization of reclaimed features in the South China Sea. He coined the term “Great Wall of Sand” to illustrate China’s strategy in building up the features.

As I previously reported, the Chinese government went so far as to ask the incoming Trump administration during the transition to cut Harris’s PACOM tour to two years and show him the door, but the White House did not comply. Beijing denies making the request.

Although Harris’s tour would be shortened if he were made ambassador to Australia, that would not constitute a sop to the Chinese government, officials said. The odds-on favorite to replace Harris atop PACOM, according to officials, is Adm. Scott Swift, the current head of the U.S. Pacific Fleet. Swift is also known to support strong responses to Chinese aggression.

The move would be similar to when then-PACOM Commander Adm. Joseph Prueher was nominated to serve as ambassador to China in 1999 and Adm. Dennis Blair was simultaneously appointed to replace him.

Secretary of State Rex Tillerson wanted to appoint Susan Thornton, the acting top Asia official at State, to fill that role permanently, but she was opposed for months by Bannon, according to administration officials. Now that Bannon has left the administration, her prospects have improved. The White House had also been considering Hong Kong lawyer Michael DeSombre for the job, but DeSombre, a top overseas Republican fundraiser, lost his main advocate when Priebus left.

Trump’s failure to get his Asia policy team in place has brought him increasing criticism as the North Korea crisis worsens, even from friendly commentators such as Laura Ingraham, who lashed out at Trump Tuesday morning on Fox.

Trump responded directly to Ingraham on Twitter Tuesday, saying he might not make all the appointments after all.

Tillerson’s staff placed the blame for the vacancies directly on the White House this week.

“The system is busted,” Tillerson’s spokesman R.C. Hammond told Axios Monday. “The secretary sends over recommendations and they sit on the dock.”

The White House did not respond to requests for comment.