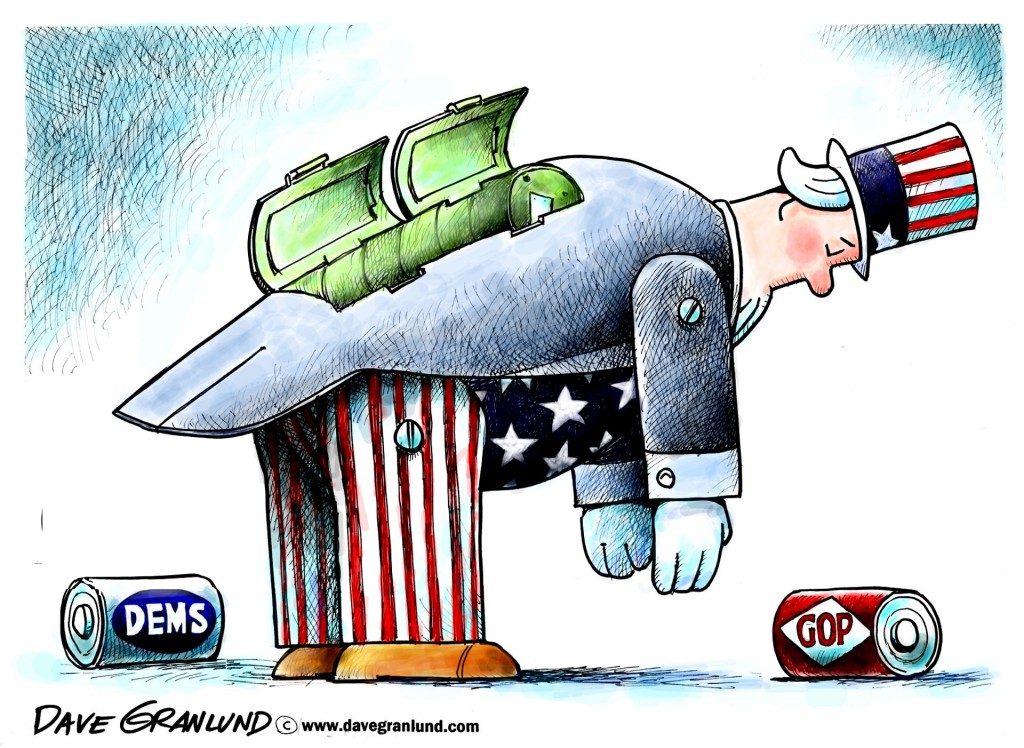 Among contemporary American life’s many negative influences on Torah-conscious Jews is a subtle one that is generally overlooked.

We don’t need reminders of the pernicious impact of the surrounding society’s denial of eternal truths, embrace of immorality, lack of any semblance of tznius, or obsession with material comforts and possessions. Well, actually we do need such reminders, and receive them from our manhigim.

But we seldom hear about a spiritual ill that, at least to my lights, seems to be running wild among even Jews who are otherwise committed to Torah: Political bandwagon-jumping.

I’m not referring, of course, to responsible shtadlanus, whose primary and most responsible practitioner is the organization I am privileged to work for (but, I remind readers, in whose name I do not write in this space), Agudath Israel of America.

The judicious and delicate execution of shtadlanus, interaction with government officials, which was pioneered in the U.S. by the likes of “Mike” Tress and Rabbi Moshe Sherer, zichronom livrachah, is vital, although not a simple thing. People like my esteemed colleagues Rabbi Chaim Dovid Zwiebel and Rabbi Abba Cohen, with the guidance of Gedolim, admirably carry on those pioneers’ work in a duly careful and conscientious manner.

My concern is with something else, what might best be called the “political sports team mentality” popular with so many simple-minded Americans, but which has been seeping, heavily of late, into the Torah-dedicated world as well.

Otherwise intelligent individuals gleefully glom on to particular political parties or politicians, usually for some (at least arguably) rational reason, but then, when faced with the championed party’s or person’s wrong-headed actions, words or behavior, are unable to let go. The fans bend over backward to justify the unjustifiable, because, well, it’s their player or their team.

And, conversely, the “opposing team” is a no-good bunch of bums, and can do no right. A leader or legislator can act laudably but, if he is on the wrong side of the designated partisan divide, will be criticized for being hypocritical, having a hidden agenda, or just for not having done more.

Is this what our community has come to, a quieter but no less mindless version of the rowdy crowds who heartily chant “Yes, we can!” or “Lock her up!”?

Something’s gone missing in parts of our community and some of its organs’ political positions and commentary. Actually a few things. One is humility.

That is to say, there are seldom simple answers to complex political issues, which most political issues are. Yes, there are certainly occasions when it is clear that a particular piece of legislation or political candidate is worthy, or the opposite.

But in most cases, things are not entirely as they are portrayed by either the New York Times’ editorial page or talk radio personalities. And only a careful hearing-out and honest consideration of all sides of an issue, be it immigration or free trade or Confederate statues or even a potential peace process in the Middle East, has a chance of yielding an informed, objective position. Mindless team spirit is no path to emes. Sometimes, even, as conservative columnist David Brooks recently observed, “The truth is plural.”

Thoughtful, truth-consistent positions come from research and objective analysis, not the rantings or self-righteousness of partisan players. Assertions, even if one hears them shouted on the radio or sees them, as the wry joke goes, “on the internet!,” are not necessarily actual facts.

An actual fact is that, at the “Unite the Right” rally earlier this month in Charlottesville, one side was entirely composed of white supremacists of varied stripes but the other was mostly comprised of non-radical, non-violent opponents of white supremacy. And that the former group contained no very fine people. And, on the other hand, that neither Steve Bannon nor President Trump is an anti-Semite.

An actual fact is that it wasn’t “the media” alone that was disturbed by the president’s seeming comparison of the two groups, but also leading Republican lawmakers, staunchly conservative periodicals, commentators like Charles Krauthammer, members of the Joint Chiefs of Staff, U.S. Ambassador to Israel David Friedman and, l’havdil, a number of respected Rabbanim.

An actual fact is that, as Senate Majority Leader Mitch McConnell recently observed, “Most news is not fake.”

Mr. Brooks made another observation about political “zealots.” They turn politics, he wrote, “into a secular religion.” In our case, actually, it’s much worse. They turn religion, ours, into political tools, and even attempt to utilize statements of Chazal and divrei Torah to buttress their partisan positions. That’s indefensible.

As is the entire “sports team” mentality in politics. We are, or should be, better than that.