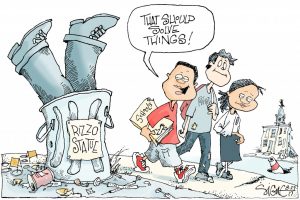 April 7 is a momentous date in Iraqi history — the day the giant statue of Saddam Hussein was wrenched out of its pedestal and came tumbling down to cheers below.

The removal of a statue is a deeply symbolic one to citizens across the world. Chaim Shapiro wrote in his seminal Go, My Son how he was dispatched one morning to remove the ubiquitous imagery of Lavrentiy Beria, the chief of the feared Soviet Union internal security apparatus. From one day to the next he had been ousted from his job — no, he didn’t become an on-demand interviewee on CNN and lapdog for every amateur journalist seeking an anti-regime quote. Beria was taken out and summarily shot.

In a country where people don’t ask questions, the USSR made sure everyone knew of Beria’s new situation by clearing the walls of his glowering face atop a glittering chest full of medals.

Historically, taking down statues and monuments signifies a sharp breach with the past and an ushering in of a new era. Communism out, democracy in. Break with fascism — peace and love, bring it on.

The current rush by a tiny minority of progressives to axe the past is threatening America’s very soul. This is not about Robert E. Lee or Woodrow Wilson. This is about the leftist attempt to rework America into a new and terrifying image — an image where only deviants are bestowed constitutional rights, where only those whose past persecution passes media muster are granted reparations.

An image where you and I have no place.

It is increasingly clear that this is not some rarefied noble effort to eradicate racism and hate from our midst. A brief look at those behind the push to knock Christopher Columbus off his midtown Manhattan pole shows an extremely selective process at who would stay under the next regime and who would go.

Al Sharpton, for example, remains the place to go for Gov. Andrew Cuomo and Mayor Bill de Blasio. Thursday is the 26th yahrtzeit of Yankel Rosenbaum, Hy”d — as recently as 2015, Sharpton refused to apologize for his role in inciting the Crown Heights riots.

The same people chasing after Columbus to throw him into the sea are hugging anti-Semites such as Linda “Palestinian rock-throwers are the picture of courage” Sarsour. New York City Council Speaker Melissa Mark-Viverito, who is leading the mob to eradicate symbols of “don’t make me uncomfortable for even a minute,” fiercely defended Puerto Rican terrorist Oscar Lopez Rivera after he was declared a grand marshal of a Manhattan parade. Lopez Rivera abetted the terrorist murder of three NYPD officers in the 1970s.

If Lopez Rivera’s bust were to be displayed in Central Park, there would not be any protests by those moaning about Columbus.

This anti-history crowd is usually tinged with an anti-Semitic brush and intolerance for the opinions of others. We should not join them.

Barring those who use GPS for local rides, readers may be unaware that 18th Ave. is actually called Cristoforo Colombo Boulevard for the great explorer who 500 years ago first opened the continent to the huddled masses yearning to be free. Columbus’s naval pioneering and bravery at sea, undertaught in today’s schools, is the 15th-century equivalent of Neil Armstrong’s blazing path to the moon. Except that Columbus’s discovery led to the world’s greatest democracy, while results of Armstrong’s giant leap seem, in hindsight, more like a small step for mankind.

The push to eradicate the country’s past is starting with Confederates but will end with George Washington (slave owner), Abraham Lincoln (just like President Trump, he was too late in denouncing slavery), Woodrow Wilson (he made the world safe for democracy, but presided over a segregated Washington, D.C.).

Many of them are too humorous to cry about — such as the sudden “discovery” by the MTA that patterned tiles on the tracks may be mistaken for a Confederate symbol. Confusing some colorful bars for the Confederacy — no wonder New York City schools pass less than 20 percent of their students on American history.

Then there’s ESPN pulling an announcer from a game because of his name — Robert Lee. The poor employee, a Chinese immigrant who lives in Albany, shares a name with 11,000 other Americans, but it was deemed too toxic to allow out in the public arena.

Assembly Speaker Carl Heastie joined the fight to get rid of a mural in the War Room in Albany’s Capitol — until he was told that it was a harmless picture of the Battle of Gettysburg, which the Union won. New York erected the mural since more soldiers from that state died during that battle than from any other.

Do Democrats support erasing the Union victory from history?

This is like some poorly edited article which sloppily removed a paragraph but left behind the phrase’s context yawning like a gaping sinkhole.

Another example — I admit, I’ve always admired Peter Stuyvesant, the first governor of New Amsterdam. He was an atrocious anti-Semite and probably horrible human being, but those were the times he lived in. He didn’t just hate Jews; he also hated Catholics, Quakers and anyone else who didn’t worship as he did.

I do not support the effort by some to join the fray and attempt to get his statue toppled from Manhattan or his name from a prestigious school. Because in his times he was an average hater, and he got a nice amount done which benefits the Jewish community to this day. He built the wall to keep out the British, for one. That wall was kind enough to later lend its name to Wall Street.

Story is — don’t impose today’s morals on history’s characters. Are there any calls to destroy Titus’s Arch in Rome? Italy is a democratic country — why not go for it? It’s because history is important both for the victors and the vanquished.

Longtime FBI head J. Edgar Hoover is a hated man in the black community over the discovery that he extensively wiretapped Martin Luther King Jr. during the Civil Rights era. Less known is that Hoover sought and received permission from the attorney general at the time — Robert F. Kennedy.

I do not support defrocking Kennedy for his opposition to civil rights. It was a different era then and he did much good along with the bad.

The point is that the statues and busts sprinkled around the country’s parks and pantheons reflect the country’s history — from Columbus’s discovery through Thomas Jefferson’s magnificent 1776 manifesto to George Washington’s leadership in the field and later in office.

To all you do-gooders caring about the welfare of the black community so none shall feel unwelcome for even a moment — the issue topping the charts of all black leaders is education. Free them of the shackles of the public school system, pass a voucher system and allow them to CHOOSE.