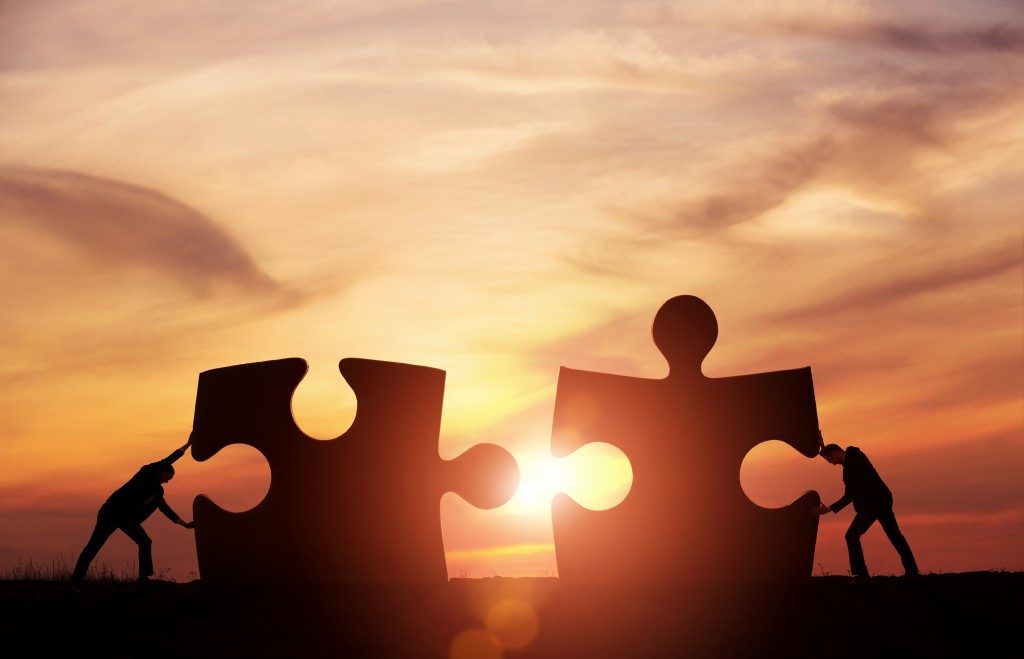 Following the deadly clash in Charlottesville, Virginia, the media zoomed in on the systemic lack of unity in America. At a subsequent press conference, President Trump was repeatedly asked how he plans to address it. The president’s consistent response was “jobs,” reiterating his focus on bringing huge companies’ operations back to the country and thus creating a plethora of jobs. “Jobs=Unity” was apparently his mantra. I imagine I wasn’t alone in wondering: what does one have to do with the other? Yes, unemployment is a problem and demands comprehensive attention. But the disunity and discord plaguing the country is all about radically divergent politics and philosophies, isn’t it? So, what does jobs have to do with that?

“Chalk this up to classic, politician talk,” I thought at first. You don’t have an answer to a pointed question? No problem. Just talk about something else! Politicians do this all the time. The president, I figured, has no solution for the ever-widening chasm dividing American society (perhaps some theoretical physicists/psychologists will one day explore the possibility of naming this “the expanding universe syndrome”), so he just changed the subject and talked about what he feels is one of his strong points. Namely, jobs creation. That also seemed to fit well with the fact that he kept urging the reporters to ask about infrastructure instead of obstinately fixating on the Charlottesville tragedy.

Suddenly, though, it occurred to me that there may very well be a strong support for the president’s assertion from a Rashi in Parashas Miketz! Commenting on the seven plump cows being described as “beautiful of appearance,” Rashi says, “This alludes to the days of plenty during which people look good to one another, since people don’t have a stingy eye toward one another.” When there is financial abundance — and everyone has what they need and want — people tend to look kindly on one another. When society is stressed by monetary duress, though, jealousy and enmity can grow like bacteria in a petri dish.

A community Rav once asserted that most shalom bayis problems are catalyzed by lack of parnassah. Harav Eliyahu Goldschmidt, zt”l, author of Dear Daughter and Dear Son, was once called by a woman who explicated an entire litany of complaints against her husband, heavily intimating that there is no light at the end of this tunnel. “Let me mull this over and I’ll get back to you shortly,” Rav Goldschmidt told her. Knowing that this couple was struggling with a certain financial matter, Rav Goldschmidt contacted a financial expert acquaintance, presented the issue, and asked his advice. Armed with a solid plan, Rav Goldschmidt called the woman back and deftly wove the financial expert’s advice into the conversation; whereupon the woman fell absolutely silent for a few moments. The conversation then came to a rapid close. Later, this woman called up Rav Goldshmidt again to apologize for her initial tirade against her husband. “I really don’t know what came over me;” she said, “really, my husband is a wonderful person and those things I said about him are not true at all. And I think that our marriage is actually quite good. Thank you so much for all your help!”

Now, I’m pretty sure that President Trump did not have that Rashi in mind when he made his comment about jobs unifying the country, but the fact is that he may be right on the mark. Yes, the country is harshly divided by exceedingly divergent political and philosophical views. However, as we see from the Rashi about the fat cows and the story of Rav Goldschmidt: often, intolerance for others’ differences is born of economic stress. And when that stress is alleviated, people begin looking much more kindly toward one another, and can respect each other’s differences.

No, this is not a “Defend Trump” op-ed. That’s not my point at all. What I am driving at is this: strife and discord are serious problems. Whether it’s communal machlokes, shalom bayis problems, fights between neighbors, or what have you, this fundamental bein adam lachaveiro challenge comprises one of our greatest struggles. So long as combatants are under the assumption that the points of contention are the inherent, essential root of the problem, it can be very difficult, if not nearly impossible to rise to the challenge. Cognizance, though, that some financial or other type of stress may be creating a toxic environment in which suspiciousness and discord flourish, can empower us to challenge those assumptions. Like Rav Goldschmidt, we can shift focus to addressing the underlying stress that cripples our ability to look kindly at one another, empathize with one another, and respect one another’s differences. By so doing, we can — with concerted effort and an abundance of siyatta diShmaya — perhaps neutralize some of the most potent catalysts of our society’s greatest scourge.