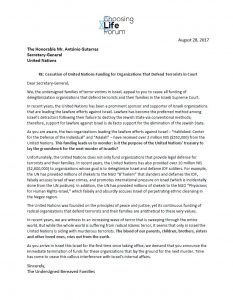 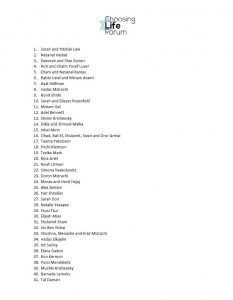 In a letter presented to U.N. Secretary-General António Guterres on Tuesday, members of bereaved families of terror victims ask him in his capacity as secretary-general of the United Nations to cease all funding to numerous organizations that defend terrorists in the Israel Supreme Court and delegitimize Israel.

Guterres arrived Sunday evening for a three-day visit in Israel and the Palestinian territories to discuss ways to revive the peace process.

In recent years, the families begin their letter, the U.N. has been a prominent sponsor and supporter of Israeli organizations that are leading the “lawfare” efforts against Israel.

They note that the two organizations leading the lawfare efforts against Israel — “HaMoked: Center for the Defense of the Individual” and “Adalah” — have received over $550,000 from the U.N.

“Is it the purpose of the United Nations’ treasury to lay the groundwork for the next murder of Israelis?” they wonder.

“The United Nations was founded on the principles of peace and justice, yet its continuous funding of radical organizations that defend terrorists and their families are antithetical to these very values.

“In recent years, we are witness to an increasing wave of terror that is sweeping through the entire world. But while the whole world is suffering from radical Islamic terror, it seems that only in Israel the United Nations is siding with murderous terrorists. The blood of our parents, children, brothers, sisters, and other loved ones, cries out from the earth.”

They end the letter with a demand that Guterres announce the immediate termination of funds for these organizations that lay the ground for the next murder.

“Time has come to cease this callous interference with Israel’s internal affairs,” the letter concludes.

It was undersigned by members of 41 bereaved families.

Meanwhile, the families of Oron Shaul, Abera Mengistu and Hisham al-Sayed — a fallen soldier and two Israeli civilians who are currently held captive by Hamas — met with Secretary-General Guterres on Monday evening.

The family members asked him for his personal involvement in promoting the return of their children to Israel.

The secretary-general promised the families to take care of the issue personally and to bring about the release of the Israelis held by Hamas through U.N. agencies.

Israeli Ambassador to the U.N. Danny Danon, who was present at the meeting, said that “Hamas holds our soldiers and our citizens with unbridled cruelty. The U.N. must act to return them to Israel.”

The issue of the soldiers and civilians in Gaza has been raised in all the meetings of the secretary-general in Israel: with President Reuven Rivlin, Prime Minister Binyamin Netanyahu, Defense Minister Avigdor Lieberman, Coordinator of Government Activities in Yehudah and Shomron Maj.-Gen. Yoav Mordechai and opposition leader Yitzchak Herzog.