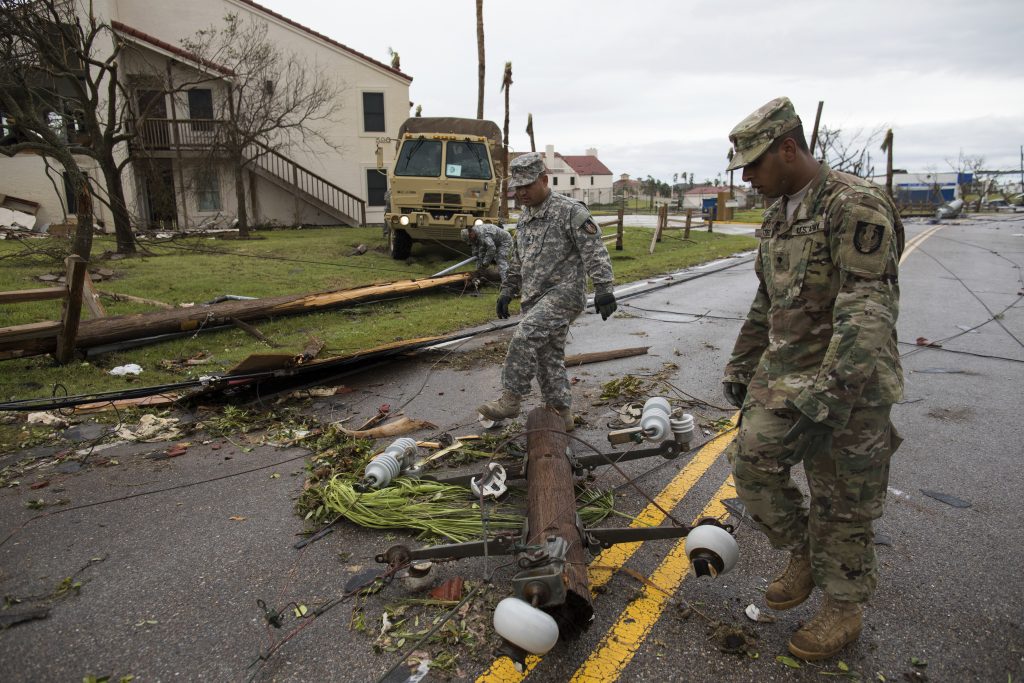 As Tropical Storm Harvey continues to dump thousands of gallons of water across southern Texas and parts of Louisiana, the U.S. military — including the Coast Guard and National Guard units from five states — is committing resources to help with rescue efforts.

On Monday, Texas Gov. Gregg Abbott, R, announced he was ordering the entire Texas National Guard — about 12,000 troops — to assist those affected by the storm.

“It is imperative that we do everything possible to protect the lives and safety of people across the state of Texas as we continue to face the aftermath of this storm,” said Abbott in a statement. “The Texas National Guard is working closely with [the Federal Emergency Management Agency] and federal troops to respond urgently to the growing needs of Texans who have fallen victim to Hurricane Harvey, and the activation of the entire Guard will assist in the efforts already underway.”

Army Col. Rob Manning, a Pentagon spokesman, described the Defense Department’s response, noting at a briefing Monday that those units on active duty headed toward the region have yet to be called upon to assist, but were staging ahead of any official request. Manning added that Abbott had signed an order mandating that all National Guard units and active duty would fall under one commander during rescue operations.

The units sent to help with Harvey rescue operations are below.

Thirty-nine helicopters and seven planes are spread between operating bases in Houston and New Orleans, according to a tweet by the service. The Coast Guard’s primary helicopters are the MH-60T Jayhawk, a Black Hawk variant, and the MH-65 Dolphin. Its primary cargo aircraft is the four-engine C-130.

The Texas National Guard is completely mobilized. Rescue efforts have involved 200 Humvees, 218 high-water vehicles, 15 wreckers and 19 fuelers, according to the Pentagon. The Texas National Guard also has 16 aircraft supporting rescue operations all along the coast. Those are 10 UH-60 Black Hawks, four UH-72 Lakotas and two CH-47 Chinooks, according to the Pentagon. The New York Air National Guard has also sent one C-130, three HH-60 Black Hawks, two C-17 cargo planes and 104 airmen from the 106th Rescue Wing.

Six helicopters from the Utah, Nebraska and North Carolina Army National Guards are also headed to the area.

The Pentagon staged what officials called a search and rescue “package” that includes planners, nine helicopters and two cargo planes as well as para-rescue teams, probably from the Air Force, at Joint Reserve Base, Fort Worth.

The social media of Helicopter Sea Combat Squadron Seven, known as the Dusty Dogs, also showed that several helicopters from the Norfolk-based unit had arrived in Memphis to help with rescue efforts if called upon.

The Defense Logistics Agency, or DLA, has provided 11 generators as well as 50,000 gallons of gasoline and 50,000 gallons of diesel fuel, according to the Pentagon. This number will probably increase in the days to come.