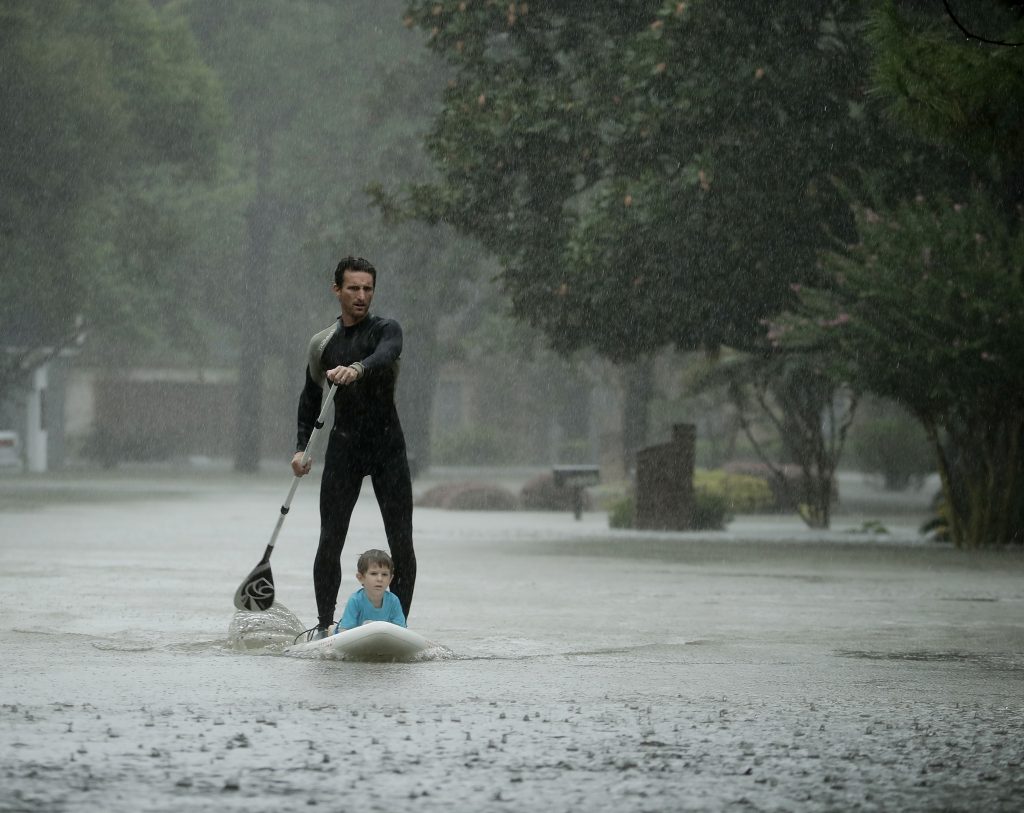 The nation’s fourth-largest city was still largely paralyzed by one of the largest downpours in U.S. history. And there was no relief in sight from the storm that spun into Texas as a Category 4 hurricane, then parked itself over the Gulf Coast. With nearly 2 more feet (61 centimeters) of rain expected on top of the 30-plus inches (76 centimeters) in some places, authorities worried about whether the worst was yet to come.

Harvey has been blamed for at least three confirmed deaths, including a woman killed Monday in the town of Porter, northeast of Houston, when a large oak tree dislodged by heavy rains toppled onto her trailer home.

A Houston TVstation reported Monday that six family members were believed to have drowned when their van was swept away by floodwaters. The KHOU report was attributed to three family members the station did not identify. No bodies have been recovered.

Police Chief Art Acevedo told The Associated Press that he had no information about the report but said that he’s “really worried about how many bodies we’re going to find.”

According to the station, four children and their grandparents were feared dead after the van hit high water Sunday when crossing a bridge in the Greens Bayou area.

The driver of the vehicle, the children’s great-uncle, reportedly escaped before the van sank by grabbing a tree limb. He told the children to try to escape through the back door, but they were unable to get out.

The disaster unfolded on an epic scale in one of America’s most sprawling metropolitan centers. The Houston metro area covers about 10,000 square miles, an area slightly bigger than New Jersey. It’s crisscrossed by about 1,700 miles of channels, creeks and bayous that drain into the Gulf of Mexico, about 50 miles to the southeast from downtown.

The flooding was so widespread that the levels of city waterways have either equaled or surpassed those of Tropical Storm Allison from 2001, and no major highway has been spared some overflow.

The city’s normally bustling business district was virtually deserted Monday, with emergency vehicles making up most of the traffic. Most businesses were closed.

Elsewhere, water gushed from two reservoirs as officials sought to release pressure on a pair of 70-year-old dams that protect downtown. Water was at risk of spilling around the sides of the barriers, which have a long history of seepage. The move was supposed to help shield the business district from floodwaters, but it could also flood thousands more homes.

Meanwhile, rescuers continued plucking people from the floodwaters — at least 2,000 so far, according to Acevedo. At least 185 critical rescue requests were still pending on Monday morning, he said.

Rescuers were giving priority to life-and-death situations, leaving many people to fend for themselves.

Chris Thorn was among the many volunteers still helping with the mass evacuation that began Sunday. He drove with a buddy from the Dallas area with their flat-bottom hunting boat to pull strangers out of the water.

“I couldn’t sit at home …and do nothing since I have a boat and all the tools to help,” he said.

They got to Spring, Texas, where Cypress Creek had breached Interstate 45 and went to work, helping people out of a gated community near the creek.

A mandatory evacuation was ordered for the low-lying Houston suburb of Dickinson, home to 20,000. Police cited the city’s fragile infrastructure in the floods, limited working utilities and concern about the weather forecast.

In Houston, questions continued to swirl about why the mayor did not issue a similar evacuation order.

Mayor Sylvester Turner has defended the decision and did so again Monday, insisting that a mass evacuation of millions of people by car was a greater risk than enduring the storm.

“Both the county judge and I sat down together and decided that we were not in direct path of the storm, of the hurricane, and the safest thing to do was for people to stay put, make the necessary preparations. I have no doubt that the decision we made was the right decision.”

He added, “Can you imagine if millions of people had left the city of Houston and then tried to come back in right now?”

The Red Cross quickly set up the George R. Brown Convention Center and other venues as shelters. The center, which was also used to house Hurricane Katrina refugees from New Orleans in 2005, can accommodate roughly 5,000 people. By Monday morning, it was already half full.

At the Addicks and Barker reservoirs, the Army Corps of Engineers started the water releases ahead of schedule early Monday because water levels were climbing at a rate of more than 6 inches (15 centimeters) per hour, Corps spokesman Jay Townsend said.

When Army Corps officials asked hundreds of residents to evacuate, they explained that the release could flood subdivisions near the reservoirs, which were built after devastating floods in 1929 and 1935. The reservoirs are designed to hold water until it can be released downstream at a controlled rate.

In the Cypress Forest Estates neighborhood in northern Harris County, people called for help from inside homes as water from a nearby creek rose to the same level as their eaves. A steady procession of rescue boats floated into the area.

One man, Joe Garcia, carried his German shepherd in the chest-deep water before being picked up by a boat. Garcia said he floated out a tub of his belongings, then went back for his dog.

Harvey increased slightly in strength Monday as it drifted back over the warm Gulf of Mexico, according to the National Hurricane Center.

Forecasters expect the system to stay over water and at 45 mph (72 kph) for 36 hours and then head back inland east of Houston sometime Wednesday. The storm is then expected to head north and lose its tropical strength.

Before then, up to 20 more inches (51 centimeters) of rain could fall, National Weather Service Director Louis Uccellini said Monday.

That means the flooding will get worse in the days ahead and the floodwaters will be slow to recede once Harvey finally moves on, the weather service said.

The amount of water in Houston was so unprecedented that meteorologists had to update the color charts on the weather service’s official rainfall maps to indicate the heavier totals.

In Louisiana, the images of the devastation in Houston stirred up painful memories for many Hurricane Katrina survivors.

“It really evoked a lot of emotions and heartbreak for the people who are going through that now in Houston,” Ray Gratia said as he picked up sandbags for his New Orleans home, which flooded during the 2005 hurricane.

Harvey was the fiercest hurricane to hit the U.S. in 13 years and the strongest to strike Texas since 1961’s Hurricane Carla, the most powerful Texas hurricane on record.