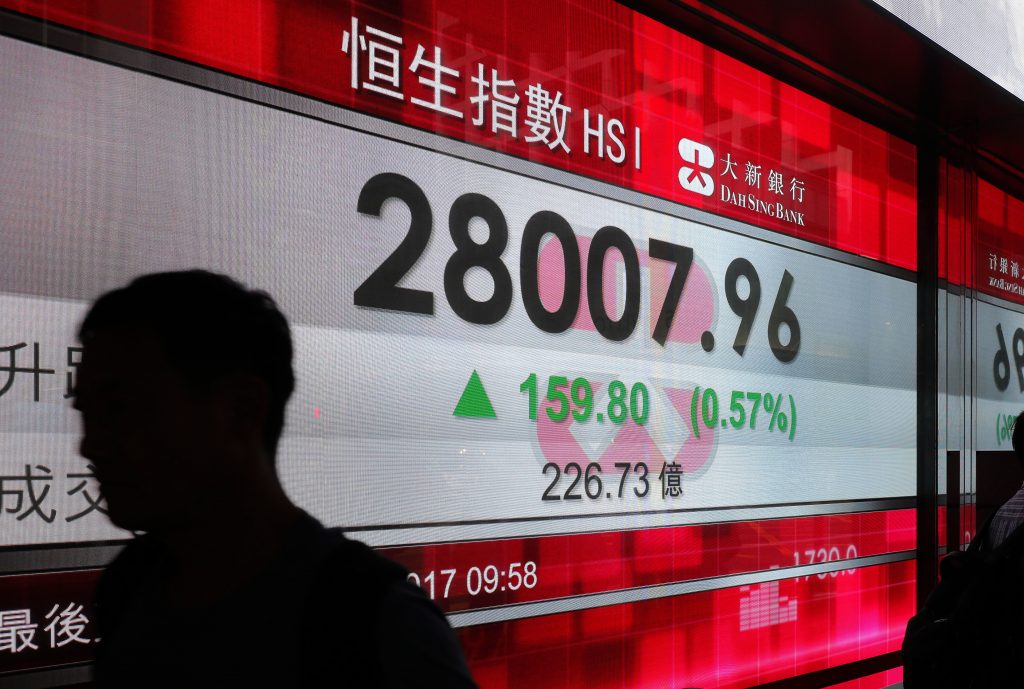 U.S. gasoline futures rose to a two-year high on Monday as Tropical Storm Harvey pummeled the heart of America’s energy sector, while the euro hit a 2½-year peak after the European Central Bank president refrained from talking down the currency.

Following a subdued session in Asia as investors awaited damage estimates from the storm, financial spreadbetter LCG expected Germany’s DAX to open down 0.2 percent and France’s CAC 40 to start the day 0.3 percent lower. The U.K. is closed for a bank holiday.

U.S. stock futures were down 0.2 percent, suggesting softer opening on Wall Street later in the day.

Gasoline futures soared as much as 6.8 percent at one point as the storm, which came ashore on Friday as the most powerful hurricane to hit Texas in more than 50 years, continued to batter the state.

The region is home to a quarter of U.S. crude oil refining capacity, and some areas are expected to see a year’s worth of rainfall in the span of a week. At least two people have died so far, and the toll is expected to rise as the storm triggers additional tidal surges and tornados.

Harvey has knocked out a quarter of oil production from the Gulf of Mexico, prompting fears it could overturn years of U.S. excess oil capacity and low prices. Some U.S. traders were seeking to import oil product cargos from North Asia, several refining and shipping sources told Reuters.

“The rain is expected to last through to Wednesday so the disruptions could last for some time yet,” said William O’Loughlin, investment analyst at Rivkin Securities in Sydney.

U.S. economic growth more than halved in the quarter after Hurricane Katrina mauled Louisiana in August 2005, but quickly bounced back by early 2006 as reconstruction began and gasoline prices moderated.

After surging on Friday, crude oil prices were mixed on Monday as markets tried to gauge Harvey’s impact on oil production and refinery demand.

Despite gains in energy shares across the region, MSCI’s broadest index of Asia-Pacific shares outside Japan rose less than 0.1 percent.

Japan’s Nikkei was little changed, but Japanese property and casualty insurers’ shares skidded as investors fretted about the broader impact of the U.S. storm.

Markets mostly dismissed the firing of three short-range missiles by North Korea into the sea on Saturday, as the U.S. and South Korea conducted annual joint military drills that the North denounces as preparation for war.

U.S. Secretary of State Rex Tillerson said on Sunday the missile test was a provocative act but that the U.S. will continue to seek a peaceful resolution.

The Korean won strengthened 0.8 percent to 1,119.9 won to the dollar as the greenback faltered.

The euro hovered near its highest level since January 2015, retaining gains made on Friday after ECB President Mario Draghi refrained from citing the common currency’s strength as a concern or discussing monetary policy specifically at a central bankers’ meeting in Wyoming.

Instead, Draghi said the central bank’s ultra-easy monetary policy was working and the euro zone’s economic recovery had taken hold.

“The EUR bulls will feed off anything they can get that suggests a less accommodative stance going forward,” Chris Weston, chief market strategist at IG in Melbourne, wrote in a note.

The dollar fell 0.3 percent to 109.13 yen, adding to Friday’s 0.1 percent slide, after Federal Reserve Chair Janet Yellen focused more on financial stability in a speech at the same event as Draghi.

Yellen’s remarks disappointed some investors who had hoped for hints on the Fed’s plans for interest rates, though most analysts had not expected either Yellen or Draghi to shed new light on policies.

The dollar index, which tracks the greenback against a basket of other major currencies, fell 0.3 percent to 92.467, its lowest level since January 2015.

The 10-year U.S. Treasury yield was at 2.1728 percent on Monday, from Thursday’s 2.194, further undermining the dollar’s yield appeal.