Authorities said rescue attempts continue in Houston for those stranded inside flooded homes and submerged vehicles in the wake of Harvey, the most powerful storm to hit the state in more than 50 years.

The Houston Chronicle reports that hundreds of calls have been fielded for water rescues as of early Sunday, including Houston police officials who evacuated two apartment complexes and rescued more than 50 children.

Rescue crews raced against rising floodwaters early on Sunday to pull hundreds of stranded residents from their homes and cars in southeast Texas as Harvey roared inland.

The storm has killed at least two people and Harris County Sheriff Ed Gonzalez said on Twitter the death toll could rise, with his deputies responding to reports of a deceased woman and child inside a submerged vehicle on Interstate 10 near Houston.

Gonzalez and Houston Mayor Sylvester Turner on Sunday continued urging residents via Twitter to “shelter in place” and stay off rain-swollen roadways.

Houston’s William P. Hobby Airport cancelled all inbound and outbound flights early on Sunday due to standing water on the runway. The airport said its arrivals area was flooded, and the National Weather Service issued a flash flood alert for the surrounding area.

The second confirmed fatality from Tropical Storm Harvey came on Saturday evening as an elderly woman attempted to drive through flooded streets on Houston’s west side, said Sergeant Colin Howard of the Houston police department.

“It appeared that her vehicle went into high water and she drowned as a result,” he said. The victim was not immediately identified. 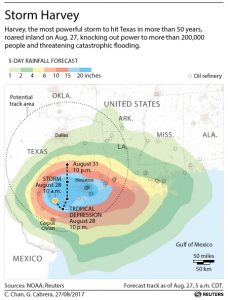 Authorities have urged residents to stay off the streets of Houston and other southeast Texas cities as rain falling at up to 5 inches per hour flooded roads and major intersections.

The National Hurricane Center said in its 4 a.m. update that the tropical storm has maximum sustained winds of 45 mph and remains stationary about 45 miles northwest of Victoria, Texas.

The center says Harvey is likely to weaken to a tropical depression later Sunday. Harvey made landfall Friday night as a Category 4 hurricane.