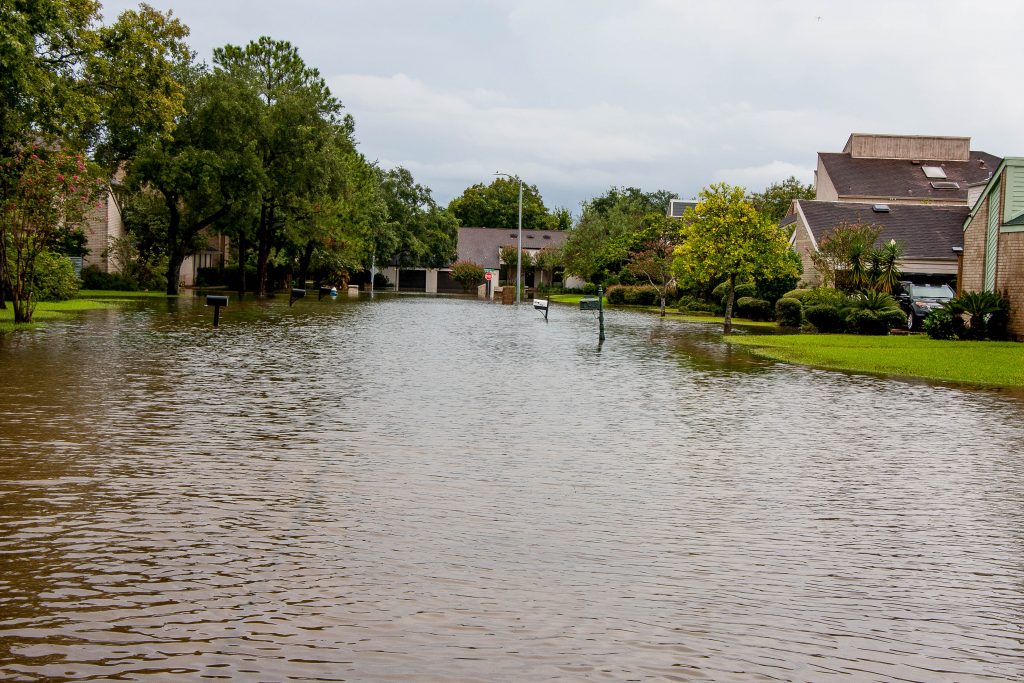 Many Houston residents were held hostage in their homes and endured heavy property damage as Hurricane Harvey has brought severe flooding to the city. Leaders of the Jewish community told Hamodia how they and those around them have fared, in what is being described as Houston’s worst flooding in recent memory.

Rabbi Gidon Moskovitz of the Meyerland Minyan said that as of Sunday afternoon, more than half of his congregants had “taken in water” to their homes, some as much as four or five feet.

“Some people have had to evacuate and go to other people’s houses which are still dry. Others, with two floors, were able to go upstairs and wait it out,” he said. “Baruch Hashem, our house is still dry, but I just took in the ladder from the garage in case we have to go on the roof.”

Houston has suffered from severe flooding a few times in recent years, which had damaged Meryerland’s shul, which has since moved to higher ground in the hopes of avoiding future flooding. Sunday morning, Rabbi Moskovitz was unable to reach the shul, where he had placed his tallis and tefillin for safe-keeping, and had to make his way to a neighbor in order to put on tefillin.

Over Shabbos, minyanim were held as usual, but with lower attendance by Minchah time, when the rain became increasingly torrential. Mrs. Moskovitz, four children in tow, drove to pick her husband up from shul on Motzoei Shabbos as flood waters began to rise, only to get stuck on the way home. The family was forced to abandon their car and take shelter in a nearby home.

“The guy turned out to be a Yid, which was remarkable siyata d’Shmaya since this isn’t exactly Monsey, a very kind fellow who welcomed us in and was able to drive us to within three blocks of our house in his truck. From there, we had to put the little ones on our shoulders and wade our way home through the water,” said Rabbi Moskovitz.

The city’s largest shul, the United Orthodox Synagogues of Houston, has been the hardest hit by past floods and reportedly, both the building and the homes of many of its congregants have been impacted by the ravages of Harvey, which has also led to power outages in harder hit areas. Congregants were warned not to use the community eruv, due to expected storm damage and a number of potential problems were addressed in a write-up of “Hurricane Halachah” that was made available before Shabbos.

Rabbi Yerachmiel Garfield, Menahel of Yeshivat Torat Emet of Houston said that in his area, known as Fondren, while streets were impassable, relatively few homes had become flooded.

“If it stops now, we will be okay here, but if it rains more tonight, it could be a very serious situation here,” he said. “The community is doing what it can at this point, supporting each other and taking people in whose houses have gotten flooded.”

With streets completely impassable, Rabbi Garfield said that in Fondren, Shacharis minyanim had been canceled on Sunday, with the discussion of arranging minyanim for Minchah and Maariv in the homes of those in the community reciting Kaddish.

Rabbi Moshe Friedman, director of Houston Kollel, located in Fondren, said that despite the severity, one advantage that people did have was the significant warning which allowed most to prepare for Harvey.

“People knew it was coming, so they stocked up on food and water before Shabbos… Now you can’t go anywhere,” he said.

While heavy rains did not set in until Shabbos afternoon, Rabbi Friedman said that there were several instances of children who had gotten stuck at the homes of neighbors at which they had gone to play earlier in the day.

“People with canoes in their garages had to come out and ferry them home,” he said. “We’re using boats to help those in need, but when the rain stops, that’s when the community will really have to step in to help fix and clean up.”

While the level and extent of damage is more than most in the area could remember, flooding has become increasingly common, especially in recent years. As such, most residents have flood insurance, but Rabbi Friedman says that as premiums rise, commensurate with the risk level of one’s neighborhood, many of those most vulnerable are unable to afford it.

On Sunday afternoon, with waters still rising, trapping residents in their homes, and a forecast of more on the way, Rabbi Moskovitz said that people were focused on doing what they could to “mitigate the damage,” saying that earlier he had assisted a neighbor in placing his furniture on cans to protect it from damage should waters come into his home.

“The silver lining is that we still have running water and electricity, but no one knows for how long, so people are trying to cook and do laundry now,” he said. “No one can do anything now since we can’t get around, but when the water recedes we’re going to need a lot of help… Many people and organizations from around the country have reached out already. We very much appreciate their concern and tefillos… Please continue davening, this really is a life-threatening situation for many people.”