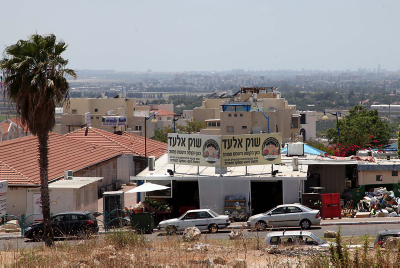 On a visit to Elad Thursday, Defense Minister Avigdor Liberman signed over a large area outside the city that had been used for IDF exercises to the Elad Local Authority. The move doubles the size of the city, and will allow for the construction of thousands of new homes.

The exercise area was used by the IDF for decades as a shooting range and weapons proving grounds. Elad was developed as a city for the chareidi and religious public in the 1980s, and the government even at that time had proposed including the exercise area as part of the future city. The exercise area is located east of Elad, and is the only area that will allow for expansion of the city: A nature reserve to the north, a large rock quarry to the south, and Road 6 to the west has hemmed in the city and prevented further development.

The city administration has been requesting transfer of the area for years, and current Defense Minister Avigdor Liberman has been taking the matter very seriously, city officials said. In preparation for the transfer, the army has for the past year stopped using the area as a weapons proving ground.

Elad Mayor Rabbi Yisrael Porush said that “the defense minister is to be praised for this action, which brings great potential to Elad for growth. Elad is suffering from a major housing shortage, and the transfer of this area to the city is another step in the establishment of Elad as a leading chareidi city.”