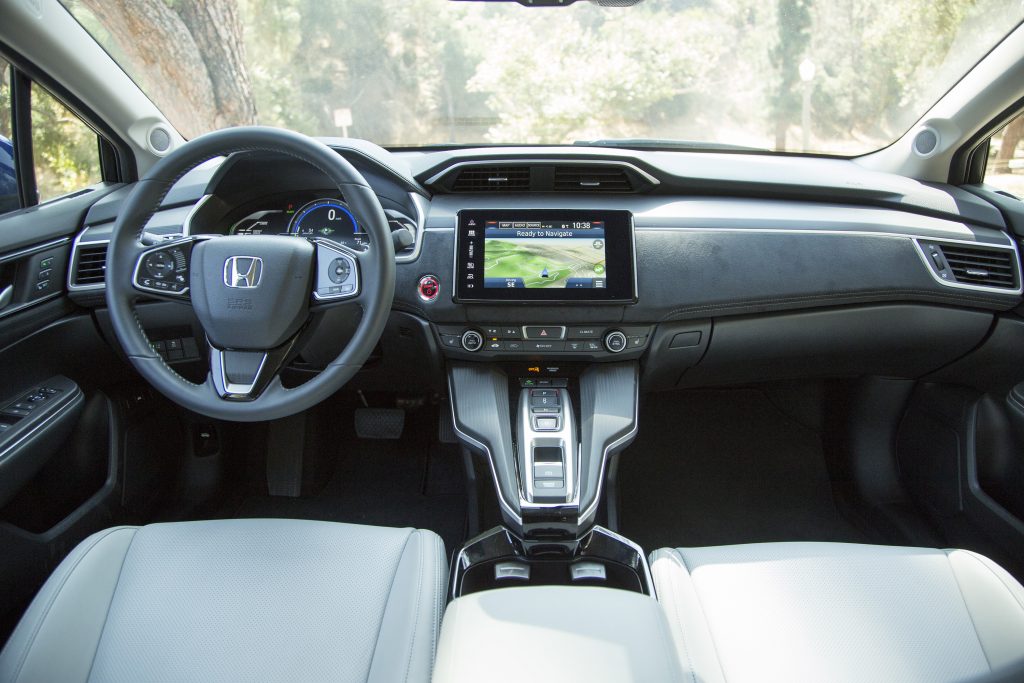 Honda showed up early for the hydrogen fuel cell party, getting to market before Toyota’s Mirai and Hyundai’s Tucson with an early version of its current Clarity sedan.

Now the company is increasing its visibility on the EV scene with an all-electric Clarity — but arriving too late, critics will say, and with too little.

The Clarity BEV, Honda’s first fully battery electric midsize car, is a five-passenger, plug-in sedan. Built on the same platform and fitted with the same body as the Clarity fuel-cell and hybrid variations, it’s comfortable, quiet, quick off the mark and stylish.

Honda, having had success with its subcompact Fit EV, has gone to great pains to make its midsize electric car a winner, and it shows outside and in.

The body design is sleek and stylish. Not a compliance vehicle or a science experiment, it looks like a Honda. Only subtle signs, such as side air curtains and partial rear skirt fenders, intended to increase air flow and decrease drag, give it away as a BEV.

Inside, it feels like an upscale sedan, with leather on the seats and Ultrasuede on the doors and dash.

Driver and passenger space feels generous. The front seats are sporty and firm. The rear seats are broad and roomy, and big enough to accommodate five adults.

Even more impressive, for a battery electric vehicle, it has a full-size trunk. Honda is rightly proud of the fact that, in its three-car Clarity lineup, the motor/engine part of the machine is all under the hood and the battery/hydrogen part is all under the seats, leaving room for your golf bag in the traditional spot.

Around town, the electric Clarity is a stable scooter, dashing quickly from corner to corner in Normal mode and jetting there in Sport mode. (In Eco mode, which conserves energy, it does everything a little more sedately.) Honda’s stats say the Clarity’s electric motor makes 161 horsepower and 221 pound-feet of torque.

The automatic transmission can be placed in manual mode, allowing the driver to shift using steering-wheel-mounted paddles, which increases the sporty feel.

It handles well, too. Because the heavy lithium-ion battery lies flat at the bottom of the vehicle, the Clarity rides smoothly and corners sharply, holding the road well at speed.

On the highway, the Clarity is reassuringly quiet, returning to the cabin very little tire noise, and almost no wind noise, above the slight hum of the electric motor.

Even at 65 mph, and even in normal mode, there’s plenty of punch. The Clarity accelerates and changes lanes with authority.

Generous side mirrors improve the Clarity’s visibility, limited somewhat by the split rear window. A backup camera (which also clicks on when the right turn signal is deployed) helps for reversing, parking and lane changing, too.

Also standard is a very luminous and attractive infotainment screen. It’s easy to operate — though I found it confusing to navigate between menus — and easy to read.

Many of the functions that would traditionally require a knob or button (radio station selection and audio volume, for example) are now manipulated with a finger tap or swipe. Drivers who don’t want to look at the screen while moving also have the option of making some selections via buttons on the steering wheel.

The Clarity also comes with a number of other features that are almost useful. A key fob button unlatches the trunk — but doesn’t cause the trunk lid to rise. A driver’s seat memory setting remembers how you like to sit but doesn’t always leave the setting there when you exit the vehicle. Plug-in spots for electronic devices are nearby, in the center console, but placed so low that they’re difficult to reach.

A 12-volt plug-in port is also handy, and is easier to find, and there’s another in the rear seating area, but there are no phone plug-ins there.

None of the preceding, however, will be germane to a certain kind of reader interested in electric vehicles. That reader will have only two questions: How much does it cost, and how far does it go?

For now, the Clarity is available only in California and Oregon. (“We’re going to fish where the fish are,” Honda vice president Steve Center told me. “Those markets have really embraced EVs.”) The Clarity can be had for $269 a month, on a three-year lease, with $1,999 due at signing.

Most customers will qualify for a $2,500 California rebate, which will take care of most of that down payment and a couple of months of the lease.

The Clarity’s range numbers are less appealing. The car can go 89 miles, Honda said, between charges.

That number might be optimistic. Perhaps, in Eco mode, with the air conditioner off, driving cautiously, on flat streets, someone could get 89 miles out of a single battery charge.

But I live in Silver Lake, and it’s August, and I’m a lead foot. In my stop and go commute, climbing steep hills to get home, with the climate control system battling 90-degree-plus outside temperatures, I probably could have squeezed 65 miles between charges.

Center explained that Honda engineers decided to favor fast-charging, via onboard hardware, over long distance using a bigger battery, which adds weight, and can compromise performance and reduce fuel economy.

So each Clarity comes standard with a plug that will accommodate charging on 120-volt, 240-volt and 480-volt systems.

Honda said the Clarity can be recharged from empty to 80 percent capacity, on a DC Fast Charger system, in 30 minutes or less. It can be fully charged on a 240-volt system in “just over three hours,” the company said.

I found the home charging method slower but just as effective. Commuters like me, who can drive to and from work, and then plug-in on a standard wall socket in their garages, can probably reclaim enough juice overnight to drive indefinitely without having to stop at a fast charging station.

If they can get a break on the cost of overnight charging from their power company, they can do that a lot more cheaply than pumping the family car full of gasoline.

A couple of years ago, 89 miles on a single charge would have seemed like a lot. In some ways, it still is. Very few American commuters, studies have shown, drive farther than that in their daily round-trip routines, and most have the capacity to run an extension cord to their driveways to recharge.

But that number now seems too small. Tesla has proven that an all-electric car can be stylish and go a long, long way between charges — albeit at a very stiff purchase point — and its promised $35,000 Model 3 will help on the suggested retail price.

The Chevy Bolt EV credibly claims a single-charge range of 238 miles — and our own Bolt EV test drive confirmed that as a real-world distance.

The Clarity might be preferable to the Model 3 because it’s already here. It bests the Bolt EV in comfort and elegance.

Besides, it’s built by Honda, whose cars have a well-earned reputation for durability and dependability. The Clarity electric could stay on the road for years — 89 miles at a time.

Price as tested: As above