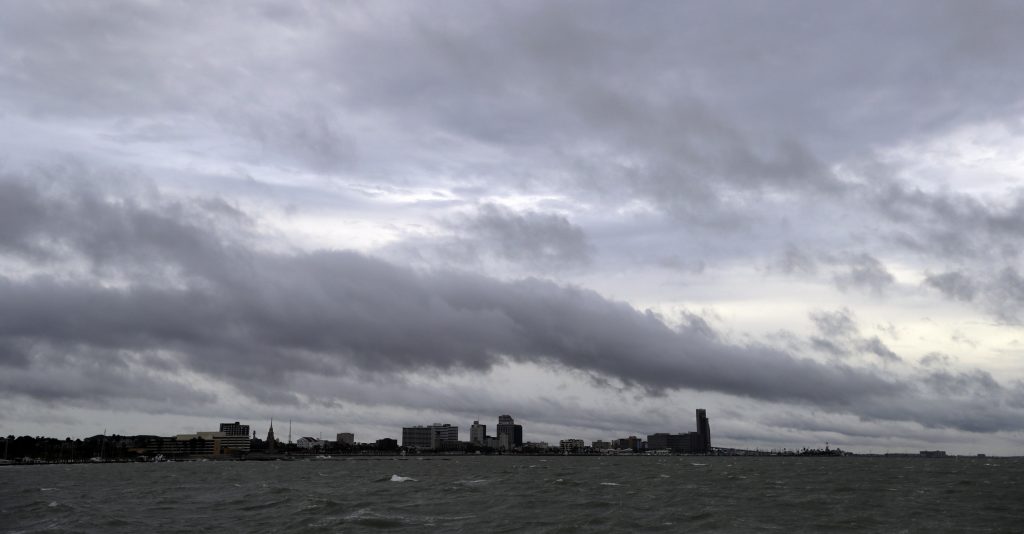 Conditions deteriorated Friday along the Texas Gulf Coast as Hurricane Harvey strengthened and crawled toward the state, with forecasters warning that evacuations and preparations “should be rushed to completion.”

Millions of people prepared for a prolonged battering from the storm, which could be the fiercest hurricane to hit the U.S. in nearly a dozen years. Forecasters labeled Harvey a “life-threatening” system that posed a “grave risk,” saying it could swamp several counties more than 100 miles inland.

Fueled by warm Gulf of Mexico waters, the storm had maximum sustained winds of 110 mph, just shy of the benchmark for a Category 3 storm, according to the National Hurricane Center. It was expected to continue gathering strength before coming ashore late Friday or early Saturday.

“Texas is about to get hit by a major hurricane,” Long told ABC on Friday. “We’re going to see significant rainfall over the next three days. There’s going to be damage.”

Landfall was predicted along the central Texas coast, between Port O’Connor and Matagorda Bay. The stretch of coastline spans about 30 miles, roughly 70 miles northeast of Corpus Christi.

The storm has the potential to produce winds up to 125 mph and storm surges of 12 feet, according to the National Hurricane Center.

Harvey grew quickly Thursday from a tropical depression into a Category 1 hurricane, and then a Category 2 hurricane early Friday. The last storm to reach Category 3 and hit the U.S. was Hurricane Wilma in October 2005 in Florida.

Superstorm Sandy, which pummeled New York and New Jersey in 2012, never had the high winds and had lost tropical status by the time it struck. But it was devastating without formally being called a major hurricane.

On Friday morning, Harvey was about 115 miles southeast of Corpus Christi, moving 10 mph to the northwest.

All seven Texas counties on the coast from Corpus Christi to the western end of Galveston Island have ordered mandatory evacuations of tens of thousands of residents from all low-lying areas. Officials in four counties ordered full evacuations and warned that there was no guarantee of rescue for people staying behind.

Voluntary evacuations have been urged for Corpus Christi and for the Bolivar Peninsula, a sand spit near Galveston where many homes were washed away by the storm surge of Hurricane Ike in 2008.

Texas Gov. Greg Abbott has expressed concern that not as many people are evacuating compared with previous storms. He said Friday that there was still time for coastal residents to get out of Harvey’s path, but they must leave immediately.

The governor activated about 700 members of the state National Guard ahead of Harvey making landfall.

Harvey’s effect is expected to be broad: The hurricane center said large storm surges could be expected as far north as Morgan City, Louisiana, some 400 miles away from the anticipated landfall.

And once it comes ashore, the storm is expected to stall, dumping copious amounts of rain for days in areas like flood-prone Houston, the nation’s fourth most-populous city, and San Antonio.

State transportation officials were considering when to turn all evacuation routes from coastal areas into one-way traffic arteries headed inland — a process known as “contraflow.”

John Barton, a former deputy executive director of the Texas Department of Transportation, predicted state officials will do so before the storm hits. But if contraflow starts too early, supplies such as extra gasoline needed to support affected areas can’t get in, he said.

Driscoll Children’s Hospital in Corpus Christi was airlifting at least 10 critically ill infants from its neonatal intensive care unit to a Fort Worth hospital out of fear that power outages might disable their ventilators.

It’s taking aim at the same vicinity as Hurricane Carla, the largest Texas hurricane on record. Carla came ashore in 1961 with wind gusts estimated at 175 mph and inflicted more than $300 million in damage. The storm killed 34 people and forced about 250,000 people to evacuate.

In Houston, one of the nation’s most flood-prone cities, Bill Pennington prepared his one-story home for what he expected would be its third invasion of floodwaters in as many years and the fifth since 1983.

“We know how to handle it. We’ll handle it again,” Pennington said he told his nervous 9-year-old son.

Dozens were in lines Thursday at a Corpus Christi Sam’s Club, at home improvement stores and supermarkets. Alex Garcia bought bottled water, bread and other basics in the Houston suburb of Sugar Land after dropping his daughter off at college. He said grocery items were likely more available in Houston than back home in Corpus Christi, where Garcia, a beer distributor salesman, said stores were “crazy.”

“We’ll be selling lots of beer,” he laughed.

In Galveston, where a 1900 hurricane went down as the worst in U.S. history, City Manager Brian Maxwell said he was anticipating street flooding and higher-than-normal tides.

“Obviously being on an island, everybody around here is kind of used to it.”