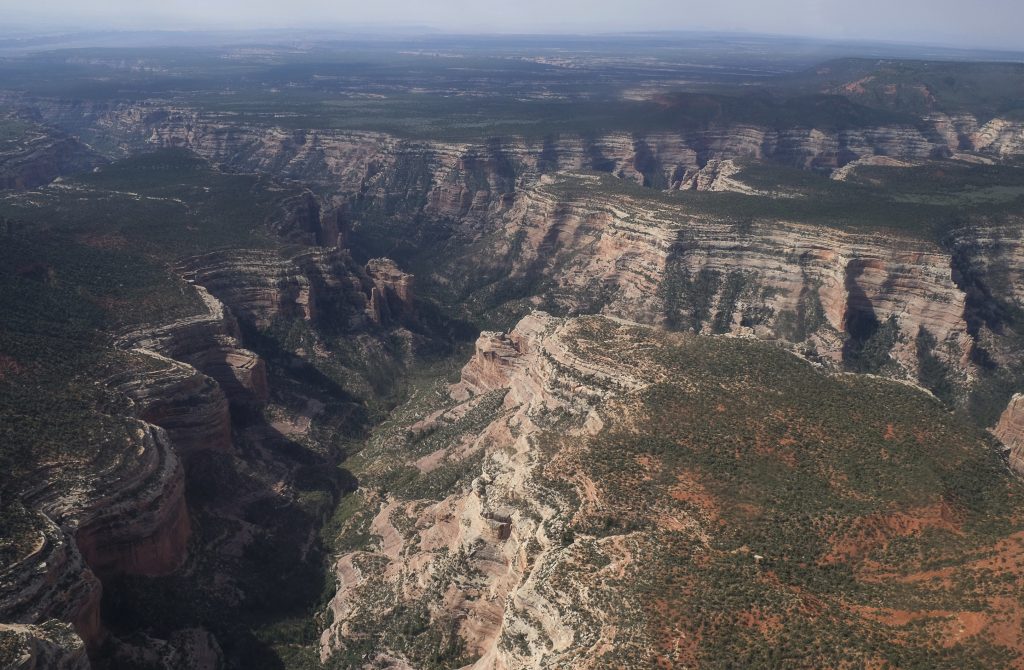 Interior Secretary Ryan Zinke said he’s recommending that none of 27 national monuments carved from wilderness and ocean and under review by the Trump administration be eliminated.

But there would be changes to a “handful,” he said.

Zinke told The Associated Press that unspecified boundary adjustments for some monuments designated over the past four decades will be included in the recommendations he planned to give President Donald Trump on Thursday. None of the sites would revert to new ownership, he said, while public access for uses such as hunting, fishing or grazing would be maintained or restored.

Zinke declined to say whether portions of the monuments would be opened up to oil and gas drilling, mining, logging and other industries for which Trump has advocated.

There was no immediate comment from the White House.

If Trump adopts the recommendations, it would quiet some of the worst fears of his opponents, who warned that vast public lands and marine areas could be lost to states or private interests.

But significant reductions in the size of the monuments, especially those created by Obama, would mark the latest in a string of actions where Trump has sought to erode his Democratic predecessor’s legacy.

“There’s an expectation we need to look out 100 years from now to keep the public land experience alive in this country,” Zinke said. “You can protect the monument by keeping public access to traditional uses.”

The recommendations cap an unprecedented four-month review based on a belief that the century-old Antiquities Act had been misused by past presidents to create oversized monuments that hinder energy development, grazing and other uses.

The review raised alarm among conservationists who said protections could be lost for areas that are home to ancient cliff dwellings, towering sequoia trees, deep canyons and ocean habitats. They’ve vowed to file lawsuits if Trump attempts any changes that would reduce the size of monuments or rescind their designations.

Zinke had previously announced that no changes would be made at six national monuments — in Montana, Colorado, Idaho, California, Arizona and Washington. He’s also said that Bears Ears monument in Utah should be downsized.

The former Montana congressman declined to reveal specifics on individual sites in an interview with the AP. He offered no further details on his recommendations for the two New Mexico monuments — Organ Mountains-Desert Peaks National Monument and the Rio Grande del Norte National Monument.

He also struck back against conservationists who had warned of impending mass selloffs of public lands by the Trump administration.

“I’ve heard this narrative that somehow the land is going to be sold or transferred,” Zinke said. “That narrative is patently false and shameful. The land was public before and it will be public after.”

National monument designations add protections for lands revered for their natural beauty and historical significance with the goal of preserving them for future generations. The restrictions aren’t as stringent as national parks, but some policies include limits on mining, timber cutting and recreational activities such as riding off-road vehicles.

The monuments under review were designated by four presidents over the last two decades. Several are about the size of the state of Delaware, including Mojave Trails in California, Grand-Staircase Escalante in Utah and Bears Ears, which is on sacred tribal land.

No other president has tried to eliminate a monument, but some have trimmed and redrawn boundaries 18 times, according to the National Park Service.

Many times, presidents reduced monuments only slightly, like when Franklin Roosevelt removed about 52 acres from Arizona’s Wupatki National Monument in 1941 to make way for a dam. But occasionally the changes were drastic, like President Woodrow Wilson’s move in 1915 to cut Mount Olympus National Monument roughly in half to open more land for logging.

Environmental groups said the 1906 Antiquities Act is intended to shield significant historical and archaeological sites, and that it allows presidents to create the monuments, but only gives Congress the power to modify them.