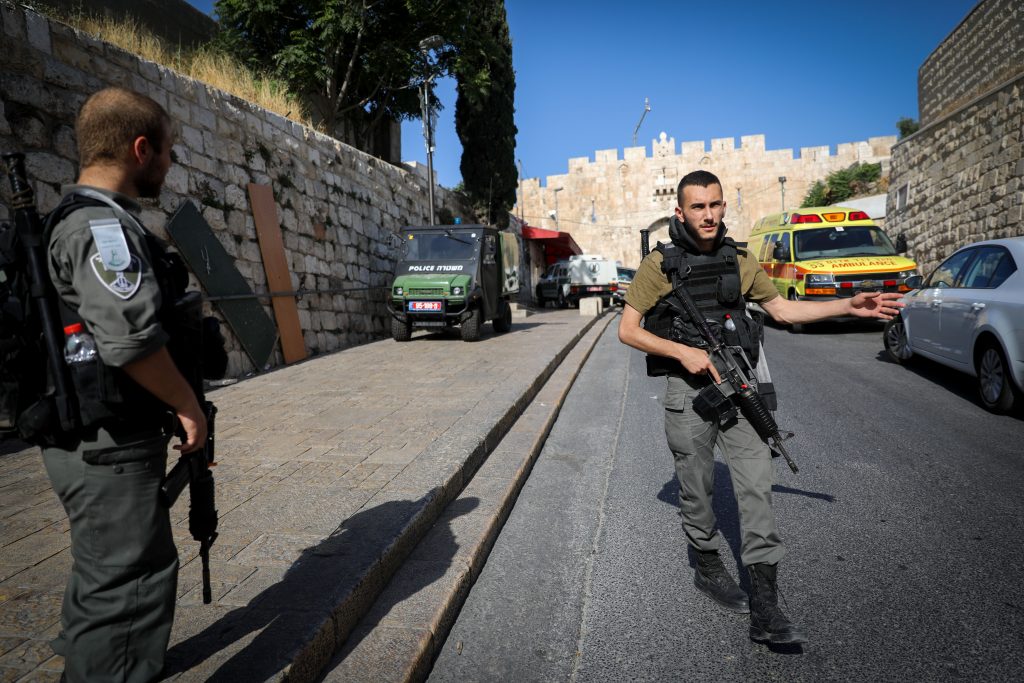 Six weeks after the terror attack on Har HaBayis which saw two Israeli Druze police officers murdered and which led to a chain of events that resulted in major rioting in Yerushalayim, security forces announced that another resident of Umm el-Faham, where the terrorists who murdered the officers lived, has been indicted. Amjad Bin Mahmad Jabbarin, age 34, is accused of knowing about the attack in advance, and assisting the terrorists in carrying out the attack.

Killed in the attack that took place July 14 on Har HaBayis were Israeli police officers Ha’il Satawi and Kamil Shanan. The two were murdered by a gang from Umm el-Faham that included Muhammad Jabrin, 29, Muhammad Abd-Allatif Jabrin, 19, and Muhammad Ahmed Mafdel Jabrin, 19 – all relatives from Umm el-Faham. Police have already made numerous additional arrests of friends and relatives of the terrorists who are accused of helping them carry out the attack.

In response to the attack, Israel installed security systems at the entrance to Har HaBayis, which led to major rioting by Arabs. Several weeks later, Israel removed the systems. Israel installed the systems after it became clear that the terrorists had hidden weapons on Har HaBayis and then used them to shoot at police who chased them after they killed the police officers.

Jabbarin is accused of conspiring with the three terrorists on details regarding the attack. The four met in a mosque in Umm el-Faham numerous times. The plan was first hatched during Ramadan, long before Israel contemplated installing security measures at Har HaBayis. The four debated targets, timing, and ways to acquire weapons and deploy them, the indictment said.

Jabbarin also assisted the terrorists in determining the best spot on Har HaBayis to hide weapons, by observing the layout of security cameras outside the compound, and was with them when they armed themselves in the Umm el-Faham mosque on their way to the attack. Jabbarin also provided training and assistance in shooting techniques to the terrorists, and helped them conduct shooting exercises in the hills outside of Umm el-Faham in preparation for the attacks, the indictment says. Jabbarin was arrested several days ago, officials announced Thursday, and will be held until trial, charged with attempted murder, terror activities and other associated crimes.