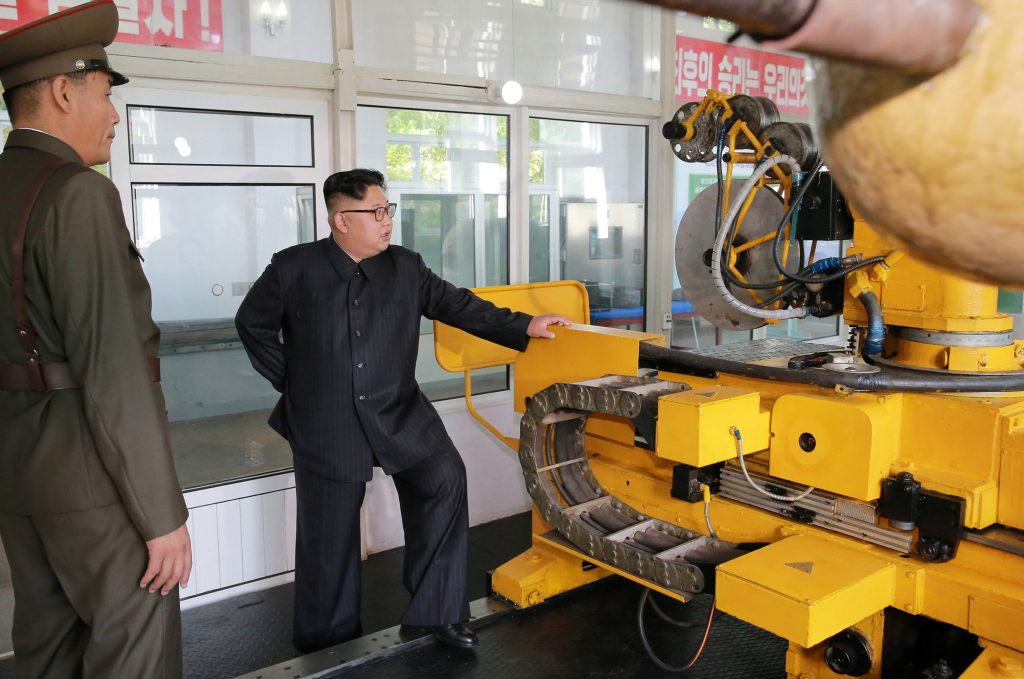 With photographs obliquely showing a new rocket design, North Korea has sent a message that it is working on an intercontinental ballistic missile (ICBM) more powerful than any it has previously tested, weapons experts said on Thursday.

If developed, such a missile could possibly reach any place on the U.S. mainland, including Washington and New York, they said.

North Korea’s state media published photographs late on Wednesday of leader Kim Jong Un standing next to a diagram of a three-stage rocket it called the Hwasong-13.

Missile experts, who carefully examine such pictures for clues about North Korea’s weapons programs, said there is no indication that the rocket has been fully developed. In any case, it had not been flight tested and it was impossible to calculate its potential range, they said.

However, a three-stage rocket would be more powerful than the two-stage Hwasong-14 ICBM tested on two occasions in July, they said. South Korean and U.S. officials and experts have said the Hwasong-14 possibly had a range of about 6,200 miles and could strike many parts of the United States, but not the East Coast.

“We should be looking at Hwasong-13 as a 12,000-km [7,456-mile] class ICBM that can strike all of the mainland United States,” said Kim Dong-yub, a military expert at Kyungnam University’s Institute for Far Eastern Studies in Seoul.

A distance in excess of 6,800 miles will put Washington and New York within range from anywhere in North Korea.

“It’s likely meant to show that they are working on a three-stage design with greater boost and range,” said retired Brigadier General Moon Sung-muk, an arms control expert who has represented South Korea in military talks with the North.

Pyongyang’s intentions in showing plans for the new missile were clear, the experts said. The photographs were accompanied by a report of Kim issuing instructions for the production of more rocket engines and warheads during a visit to the Academy of Defense Sciences, an agency he has set up to develop ballistic missiles.

“We’re getting a look at it to emphasize domestic production of missiles, and to advertise what’s coming next,” said Joshua Pollack, a nuclear-weapon and missile-systems expert who edits the U.S.-based Nonproliferation Review.

The photographs were published as tensions between North Korea and the United States appeared to have eased slightly after the isolated nation tested the Hwasong-14 and later threatened to fire missiles toward the U.S. Pacific territory of Guam.

Wednesday’s report carried by the KCNA news agency lacked the traditionally robust threats against the United States, and U.S. President Donald Trump expressed optimism about a possible improvement in relations.

Kim, the expert at Kyungnam University, said that from the design standpoint, Hwasong-13 was similar to the KN-08, a three-stage missile of which only a mock-up has previously been seen at military parades. But the new images show a modified design for the main booster stage that clusters two engines.

Another picture published by North Korean state media showed Kim Jong Un standing next to a rocket casing that appeared to be made of a material that could include plastic. Experts said if such material were used in the missile, it would be intended to reduce weight and boost range.

The photographs also showed the design for the Pukguksong-3, likely a new solid-fuel intermediate-range ballistic missile being developed for submarine launches.

Moon, the former South Korean general, said the pictures were intended to show that the North was refusing to bow to international pressure to call off its weapons programs.

“The North is trying to be in control of the playing field,” Moon said.