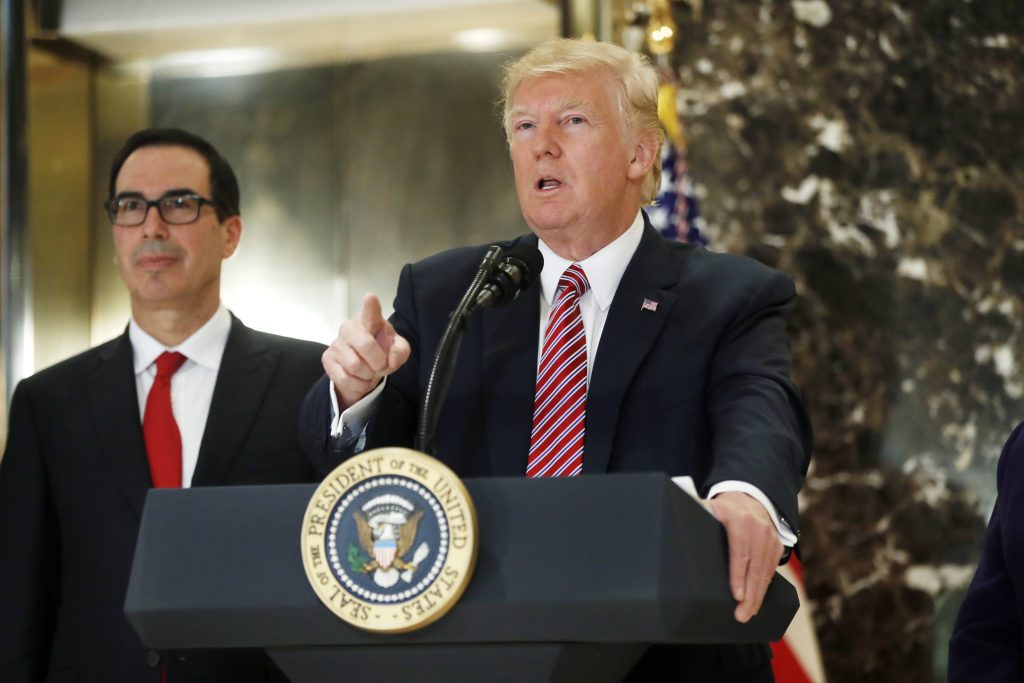 The deregulation winds blowing through Washington could add $27 billion of gross profit at the six largest U.S. banks, lifting their annual pretax income by about 20 percent.

JPMorgan Chase and Morgan Stanley would benefit most from changes to post-crisis banking rules proposed by Donald Trump’s administration, with pretax profit jumping 22 percent, according to estimates by Bloomberg based on discussions with analysts and the banks’ own disclosures. Goldman Sachs would have the smallest percentage increase, about 16 percent.

Bloomberg’s calculations are based largely on adjustments banks could make to the mix of securities they hold and the interest they earn from such assets. The proposed changes would allow the largest lenders to take on more deposits, move a greater portion of their excess cash into higher-yielding Treasuries and municipal bonds, and issue a lower amount of debt that costs more than customer deposits.

Of the changes proposed in June by Treasury Secretary Steven Mnuchin, the one that would probably have biggest impact on profit is allowing banks to buy U.S. government bonds entirely with borrowed money. Three others could also boost income: counting municipal bonds as liquid, or easy-to-sell, assets; requiring less debt that won’t have to be paid back if a bank fails; and making it easier to comply with post-crisis rules.

Regulators appointed by Trump could make these changes without congressional approval. Doing so would reverse their agencies’ efforts since 2008 to strengthen capital and liquidity requirements for U.S. banks beyond international standards. While bringing U.S. rules in line with global ones probably wouldn’t threaten bank safety, some analysts and investors worry the pendulum could swing even further.

“Since the crisis, we’ve had the luxury of excess capital buildup in the banking system and regulators reining in risky activities,” said William Hines, who directs fixed-income investments in U.S. financial firms for Standard Life Aberdeen, which manages about $750 billion. “If there’s too much pullback on minimum capital requirements, too much relaxation of restraints, we’re concerned there’ll be more risk-taking by banks, and the system will become vulnerable.”

Shares of the biggest banks rose Wednesday even as the S&P 500 Index declined. JPMorgan and Morgan Stanley were up about 0.7 percent at 11:51 a.m. in New York trading. The KBW Bank Index has risen about 25 percent since President Donald Trump was elected in November on expectations of decreased regulations and tax cuts.

Any regulatory changes would be subject to due diligence, and a number of appointments have yet to be approved or even made. There could also be pushback. Federal Reserve Vice Chairman Stanley Fischer, whose board term runs to 2020, signaled such resistance last week when he warned against peeling back rules too much. On the other hand, Gary Cohn, a former Goldman Sachs executive and deregulation proponent, is the leading contender for the top Fed job.

The Fed has led efforts to tighten regulation, including subjecting some U.S. banks to higher capital and liquidity standards than mandated by the Basel Committee on Banking Supervision. Mnuchin has called on regulators to strip away that extra padding, known as gold-plating, which would reduce capital requirements of the six biggest firms by as much as 2 percentage points.

That would allow them to return an additional $63 billion to shareholders, theoretically doubling the amount they said they would use to buy back shares over the next four quarters after results of the annual stress tests were announced in June.

Banks need capital like home-buyers need down payments: It’s the portion of their own money that’s at risk along with what they borrow to buy assets or make loans. If regulators reduce capital requirements, banks can either return equity to shareholders or keep it and leverage up. Banks have said they’re likely to do both, so Bloomberg calculations assume some of the money gets returned and some gets leveraged to enable bigger balance sheets.

Returning money to shareholders in the form of stock buy-backs would bring return on equity, a measure of profitability closely watched by investors, closer to pre-crisis levels. That’s because the number of outstanding shares would shrink. It would also help boost bankers’ pay, as rising share prices increase the value of shares many employees and executives get as part of their compensation.

Other changes proposed by Mnuchin would likely have more direct impact on profit as banks expand their balance sheets and cut costs.

Current leverage rules require banks to count all of their assets, even cash deposited at the Fed, when determining how much capital they need. Exempting cash and Treasuries from the tally would allow them to take in more deposits and use the funds to buy more government securities without tapping shareholders. Because Treasuries are considered zero risk for the purpose of calculating risk-weighted capital ratios, adding more wouldn’t affect those numbers either.

“They would be able to take on more deposits that they’ve been rejecting until now because of leverage constraints,” said Brian Kleinhanzl, an analyst at investment bank Keefe, Bruyette & Woods. “They can invest that extra cash in Treasuries that are even longer in maturity than what they typically hold now to benefit from a better spread between deposit costs and bond yields.”

A 5 percent expansion of JPMorgan’s balance sheet, with new deposits invested in Treasuries, could net the bank $2.5 billion a year in additional income, according to data compiled by Bloomberg.

That figure takes into consideration the average 0.25 percent cost of deposits for the bank and assumes that half of its investments would be in 30-year Treasuries, which yielded an average 2.9 percent in the past six months, and half in a mix of shorter-duration bonds returning 1.5 percent, reflecting the mix of its existing portfolio.

JPMorgan, Bank of America and Wells Fargo, the three largest lenders, would benefit the most from this change, as they pay the lowest rates for deposits. Spokesmen for the three banks, as well as those for Citigroup, Goldman Sachs and Morgan Stanley, declined to comment.