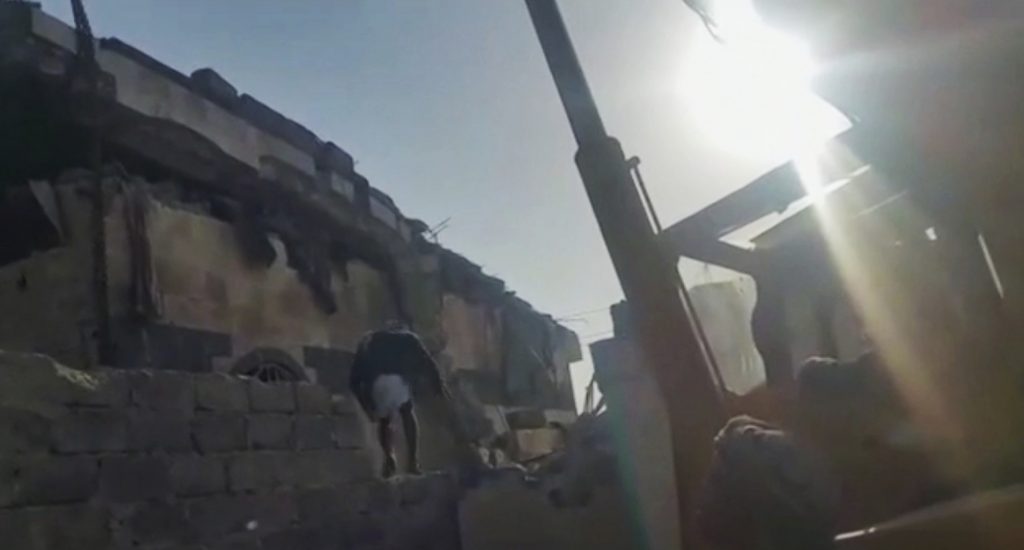 At least 35 people were killed in airstrikes that hit a hotel near a Houthi-controlled checkpoint north of the Yemeni capital Sanaa on Wednesday, a medic and a Houthi-run TV station said, blaming the attack on Saudi-led coalition forces.

The roof of the hotel collapsed, leaving at least two bodies dangling from the building in the Arhab area, about 13 miles from Sanaa, a Reuters witness said.

Al-Masira TV, which is run by the Houthi armed movement that controls northern Yemen, quoted the Sanaa governorate as saying that the death toll from the attack had risen to at least 46 “martyrs”. It did not immediately make a direct reference to civilians or fighters.

A spokesman for the Saudi-led coalition, which is fighting the Iranian-allied Houthis in Yemen, said the alliance was collecting information on the incident, without elaborating.

Yehia Hussein, an emergency worker in the Houthi-controlled area, said “Saudi-American aggressors” had targeted the hotel, which had been hosting around 100 people.

Medics had found 35 corpses as well as body parts, he said. “There are almost 13 wounded and the rest of the victims are still under the rubble,” Hussein added.

The ground-floor structure of the grey concrete building was still standing but the upper level had been reduced to rubble with metal wires splayed into the air.

Men searched through the rubble of the hotel, while others carried a body bundled in a blanket to a white van.

“The coalition has to finish the After Action Review. Throughout our process we will put all the information together,” said Colonel Turki al-Maliki, spokesman for the Saudi-led coalition, when asked about the strikes.

The Houthi forces are not believed to have any air power.

The Houthis, who hold northern Yemen, including Sanaa, are fighting Yemen’s internationally-recognized government, which is backed by the Saudi-led military alliance in a war which has killed at least 10,000 and unleashed a humanitarian disaster.

Earlier this month, a senior U.N. official condemned recent reported airstrikes in Yemen, including on a house containing children, saying they showed “disregard” for civilian safety.

The Saudi-led coalition denied targeting the family home after a health official said nine civilians were killed in an airstrike.

The United States and Britain provide arms and logistical assistance to the alliance for its campaign. The issue has caused controversy in Britain over the toll on civilians.

American officials have said they have tried to find ways to improve Saudi targeting. The Pentagon sent U.S. military lawyers to train Saudi counterparts on how to ensure the legality of airstrikes, and software designed to help determine whether certain munitions might cause destruction beyond the target.

A report by international aid agencies last week said Yemen suffered more airstrikes in the first half of this year than in the whole of 2016, increasing the number of civilian deaths and forcing more people to flee their homes.

The report did not identify any party as being responsible for the strikes but the coalition has controlled Yemeni airspace since the war began in March 2015. U.S. forces have also conducted occasional airstrikes or raids using drones.