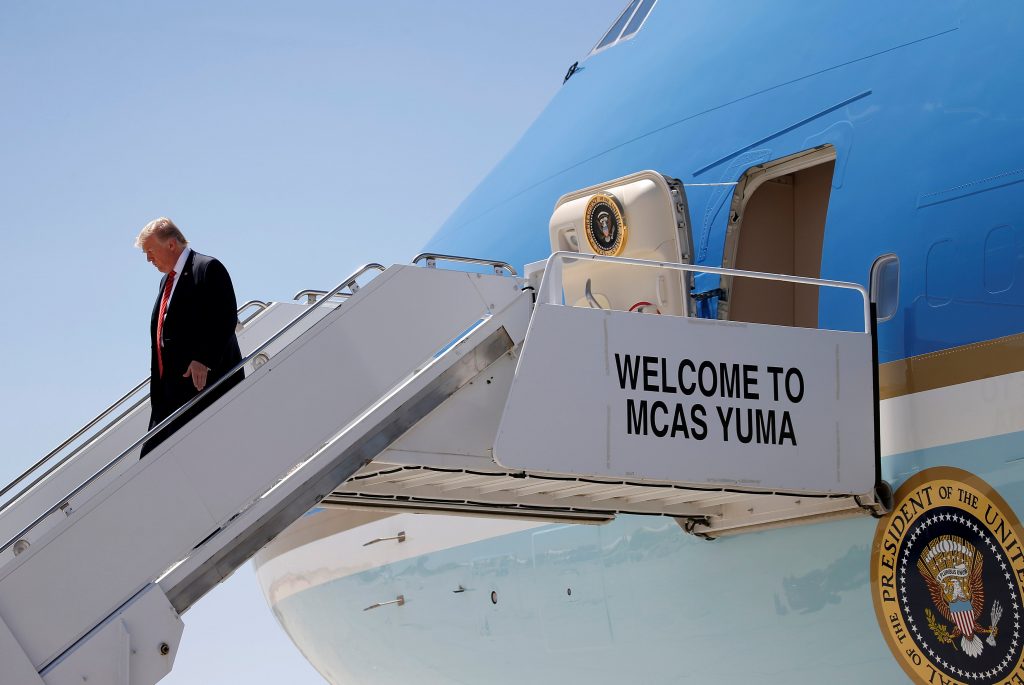 Fresh off a speech on Afghanistan that moved him in a different direction from many of his core voters, President Donald Trump is highlighting his pledge to combat illegal immigration by visiting a Marine Corps base along the U.S.-Mexico border Tuesday and inspecting a Predator drone used to patrol the region.

Trump also scheduled a nighttime rally in Phoenix, which left local officials concerned that emotions may run hot among those inside and outside of the hall so soon after Trump blamed “both sides” for violence at a rally organized by white supremacists in Charlottesville, Virginia.

Trump’s first scheduled stop is a base in Yuma that is a hub of operations for the U.S. Border Patrol. He planned to inspect equipment used on the southern border, including the drone and other aircraft.

Administration officials briefing reporters on the trip said the area had seen a 46 percent drop in apprehensions of people attempting to illegally enter the U.S. between Jan. 1 and July 31, compared with the same period in 2016. None of the officials would agree to be identified by name.

In fact, immigrant traffic around Yuma has dramatically slowed over the past dozen years. Once a hotbed for illegal immigration, the Border Patrol sector covering Yuma now ranks among the lowest in the Southwest for apprehensions and drug seizures.

Trump is trying to shift the focus to his core campaign theme of getting tough on immigration after rankling some of his most loyal supporters with his decision, announced Monday, to maintain to a U.S. military presence in Afghanistan. They also were unhappy about the recent ouster of nationalist Steve Bannon as White House chief strategist.

Bannon had made it his mission to remind Trump of what his most fervent supporters want from his presidency, and some nationalists have openly worried that without Bannon around, Trump will be too influenced by establishment Republicans on issues such as Afghanistan policy.

Democratic leaders and other Trump opponents planned protests and marches outside the Phoenix convention center to criticize the president’s immigration policies and his comments about Charlottesville. Phoenix Mayor Greg Stanton had asked Trump to postpone the rally to allow time for national healing after one woman was killed during the clashes in Charlottesville.

Gov. Doug Ducey, a Trump supporter, was expected to greet Trump upon his arrival in Phoenix, but will not attend the rally to focus on safety needs, his spokesman said.

Vice President Mike Pence, asked about the rally by Fox News Channel on Tuesday, said Trump will be “completely focused” on his agenda for the country.

“He’s also going to call on the Congress to get ready to come back when they arrive on Sept. 5th and go straight to work to make America safe again, make America prosperous again, and in his words, to make America great again,” said Pence. He was flying separately to Phoenix to introduce Trump at the rally.

Neither of Arizona’s two republican senators plan to appear with Trump while he is in the state.

Republican Sen. Jeff Flake has been a frequent target of Trump’s wrath. The president tweeted last week: “Great to see that Dr. Kelli Ward is running against Flake Jeff Flake, who is WEAK on borders, crime and a non-factor in Senate. He’s toxic!” Flake has been on tour promoting his book that says the Republican Party’s embrace of Trump has left conservatism withering.

Ward planned to attend Trump’s rally, sparking talk that the president could take the politically extraordinary step of endorsing her from the stage over an incumbent Republican senator.

In a modest but telling swipe at Ward and, by extension, at Trump, the Senate Leadership Fund, a political committee closely aligned with Senate Majority Leader Mitch McConnell of Kentucky, is spending $100,000 on digital ads that say of her, “Not conservative, just crazy ideas.”

Arizona’s other senator, John McCain, is undergoing treatment for an aggressive form of brain cancer. Trump has been critical of McCain for voting against a Republican health- care bill.

Another potential subplot to the rally is the possibility that Trump could pardon former Maricopa County Sheriff Joe Arpaio, who recently was convicted in federal court of disobeying a court order to stop his immigration patrols. Trump teased a possible pardon in a recent Fox News interview.

But White House press secretary Sarah Huckabee Sanders told reporters during Trump’s flight Tuesday, “There will be no discussion of that today at any point, and no action will be taken on that front at any point today.”