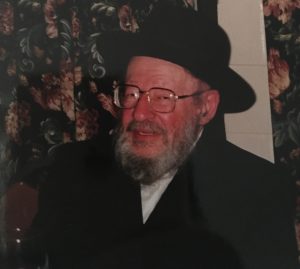 Reb Yidel Weberman, z”l, 94, a long-time askan in the Monsey community, was niftar on Monday 29 Elul. He was one of the last remaining talmidim of Harav Chaim Avraham Dov Ber Levine, zt”l, known as “the Malach”, who implanted his unique derech in avodas Hashem to a small group of bachurim in New York in the 1930’s.

Though born on American shores, Reb Yidel’s yiras Shamayim, temimus, and mesirus nefesh for a pure Yiddishkeit were traits that reflected generations gone by; he was the product of a family of fighters for Yahadus as well as of his revered Rebbi. He was a pioneer askan of the Monsey community, serving as a police chaplain and liaison for over 50 years, and his work as a volunteer in the local Ambulance Corp. predated the founding of Hatzolah.

Reb Yidel was born in Williamsburg in 1923 to Reb Ben-Tzion, z”l, and Yittel Weberman, a”h. The Weberman family had immigrated to America in the 1880’s and since then had been stalwart defenders of Torah Judaism amidst the sea of assimilation that swept up the vast majority of Jews in the country at the time. Reb Moshe Weberman, z”l, (Reb Yidel’s grandfather) fought many battles for shemiras Shabbos on the Lower East side and operated a delicatessen whose kashrus standards were trusted by even the most scrupulous of customers.

Reb Ben-Tzion was somewhat of an anomaly in his time. Though working by day as a lawyer, he was proficient in Shas and poskim, rising in the pre-dawn hours each day to pour over his sefarim. He was among the original founders of the Young Israel of Williamsburg, Agudath Israel of America, Yeshiva Torah Vodaath, and the Bais Yaakov of Williamsburg.

It was Reb Ben-Tzion Weberman who first “discovered” the Malach, while vacationing together with him in Kontrowitz’s Hotel in Spring Valley, New York.

Through their father’s influence Reb Yidel and his older brother Harav Meir, zt”l, found their way into a small but elite group who would dedicate their lives to the Malach’s teachings, which combined a complete immersion in limud haTorah, the loftiness of the teachings of the Mahral and Chabad Chassidus, and an uncompromising Yiddishkeit which was on a level almost completely foreign to the America Jewish community at the time.

Reb Yidel often repeated that in one of the many times the Malach had exhorted the group to learn with ever greater hasmadah, he said “every blatt Gemara we learn here can save thousands of Yidden in Europe.” These words, uttered years before the Holocaust, would only be fully understood in hindsight.

In 1936, Reb Yidel and the other “Malachim,” as they had come to be called, formed their own yeshivah in Williamsburg named Nesivos Olam. Under the leadership of its Rosh Chaburah, Harav Yaakov Schorr, zt”l, the group created an atmosphere of intense Torah and avodah.

Reb Yidel and other members of the chaburah became especially distinguished as the first group of young men in America to sport beards and peyos as well as traditional “European style” garb. What made them a subject of ridicule to many, would make them trailblazers for many in the next generation of Jewish immigrants. Reb Yidel retained this steadfastness and holy stubbornness, drawing on it not only in building his own Torah-true family, but in many endeavors on behalf of the tzibbur.

Despite being only a teenager during the time he spent under the Malach’s tutelage, Reb Yidel remained loyal and dedicated to his teachings and memory until his last days. He was scrupulous in utilizing his time to the utmost, heeding his Rebbi’s teaching that there are few sins worse than bitul zman, and was a picture of the unique combination of hanhagos and hashkafos that he had merited to imbibe in those years.

In 1943, Reb Yidel married, tbl”c, Devorah Lebovics, who had immigrated together with her parents from Satmar, Romania, shortly before the outbreak of the Second World War. Mrs. Weberman shared her husband’s passion and steadfastness for Yiddishkeit and was a full partner in maintaining the kedushah and taharah of their home.

The couple lived for several years in the Bronx, near the elder Lebovics, Reb Hershel, z”l, and Mrs. Mamala, a”h, later moving to Williamsburg. Reb Yidel began a career as a jeweler and watchmaker, which he continued until a little more than a decade ago.

In 1957, the Webermans moved to Monsey, which was then still a very small community. With an especially active personality and a desire to help his fellow Jew, Reb Yidel threw himself into a great many communal endeavors. He was among the founders of the town’s chevrah kaddisha and worked closely with the local police department serving as an official chaplain from the 1950’s until the early 2000’s. After training as a EMT, for over 40 years he was a volunteer for the Ramapo Valley Ambulance Corps.

Through his many connections to local authorities, Reb Yidel was a frequent and willing address for those in need of assistance. In the 1970’s, he led a legal battle to prevent an autopsy on a member of the community who had been niftar tragically. His success would serve as the forerunner and legal precedent for the right to exercise a religious objection to post-mortem exams.

Reb Yidel’s deep bond to the Malach and his ways did not preclude his admiration and connection to other tzaddikim. He often visited the Rebbes of Skver, Satmar and Klausenberg, zy”a. In his many years in Monsey, he also developed a close tie to, ybc”l, the Vitzhnitzer Rebbe, shlita.

The levayah was held on Monday afternoon in front the Weberman home on Maple Terrace in Monsey, where Harav Chaim Flohr delivered a brief hesped, before continuing on to the Vitzhnitzer Bais Medrash, where the Viznitzer Rebbe escorted the aron, followed by kevurah in the main Monsey Bais Hachaim.