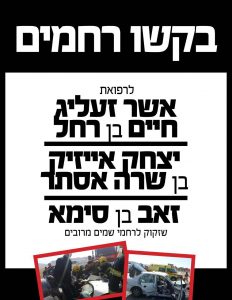 Two bachurim in their 20s were critically wounded, and another bachur and a 40-year-old woman were seriously injured, in a road accident that occurred Tuesday afternoon between two vehicles on Kvish 1 between the Almog and Beit Ha’arava Junctions near the Yam Hamelach, Ynet reported. Others were injured as well.

The wounded were evacuated in Magen David Adom vehicles and military helicopters to be treated at Shaare Zedek and Hadassah hospitals in Yerushalayim.

The names of the bachurim for Tehillim are: