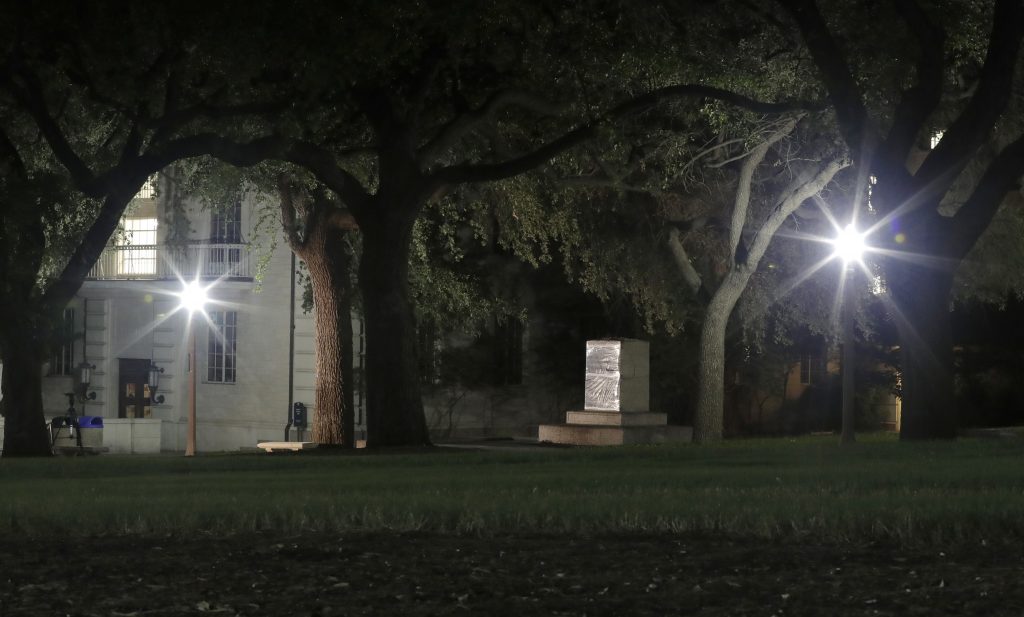 University of Texas President Greg Fenves ordered the immediate removal of statues of Robert E. Lee and other prominent Confederate figures from a main area of campus, saying such monuments have become “symbols of modern white supremacy and neo-Nazism.”

Fenves announced the move late Sunday night as crews were in place to begin taking the statues down. The school also blocked off the area during the process, and the statues are expected to be gone by mid-morning Monday, a spokesman said.

The university moved a statue of former Confederate President Jefferson Davis from its perch near the campus clock tower to a history museum in 2015. Fenves said statues of Lee, Confederate Gen. Albert Sidney Johnston and Confederate Postmaster General John H. Reagan, which were in the same area as Davis, also will be moved to the Brisco Center for American History on campus.

Crews early Monday first removed a statue of former Texas Gov. James Stephen Hogg, which was commissioned at the same time as the others, a spokesman said. Hogg will get another place on campus.

Less than 30 people, both supporters and opponents of Fenves’sorder, congregated after midnight behind barricades near the statues. There was a heavy police presence and some arguments occurred between those gathered.

The debate over public memorials for Confederate figures roared into national conversation last week after one person was killed and 19 were injured when a car drove into a crowd of people in a clash between white supremacists and counter-protesters in Charlottesville, Virginia.

“Last week, the horrific displays of hatred at the University of Virginia and in Charlottesville shocked and saddened the nation. These events make it clear, now more than ever, that Confederate monuments have become symbols of modern white supremacy and neo-Nazism,” Fenves said in a statement.

Moving the Davis statue in 2015 was a much more deliberate effort. The Davis statue had long been a target of vandalism. Fenves convened a special task force to discuss its future after a shooting rampage by a white supremacist at a Charleston, South Carolina, church and ultimately decided it should come down.

Confederate groups tried to block the removal of the Davis statue and the Sons of Confederate Veterans sued to stop it, but a state district judge sided with the school.

The decision to take down the others came much quicker. Fenves said he spoke last week with student leaders, students, faculty members, staff members and alumni about what to do after the events in Virginia.

“The University of Texas at Austin is a public educational and research institution, first and foremost. The historical and cultural significance of the Confederate statues on our campus — and the connections that individuals have with them — are severely compromised by what they symbolize,” Fenves said. “Erected during the period of Jim Crow laws and segregation, the statues represent the subjugation of African Americans. That remains true today for white supremacists who use them to symbolize hatred and bigotry.”

Asked why the school decided to remove the statues during the overnight hours, university spokesman Gary Susswein said recent events played a factor.