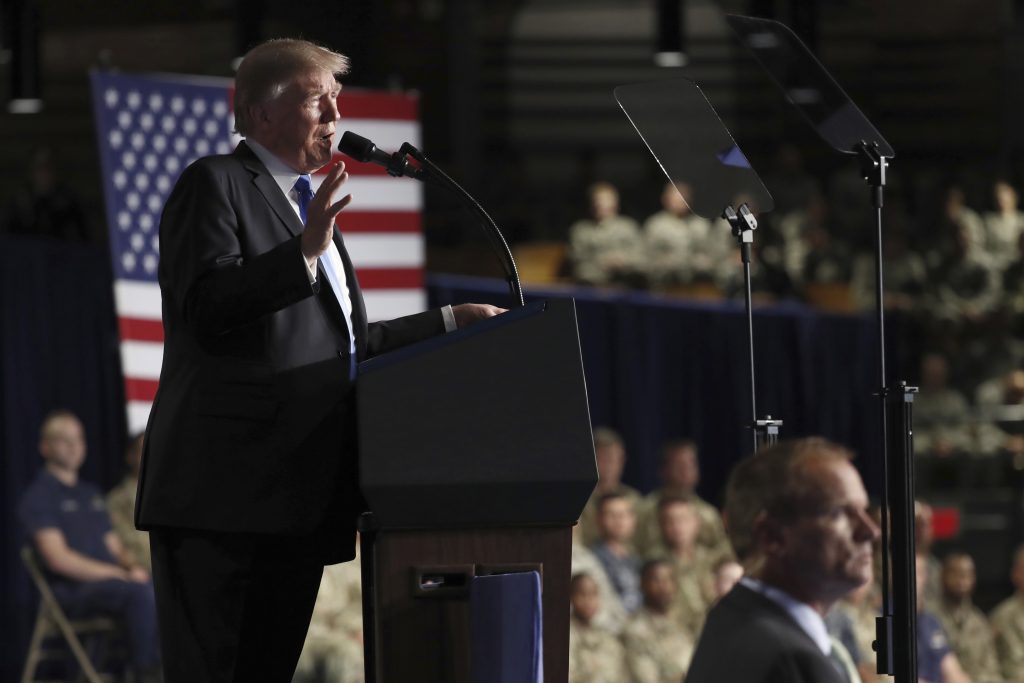 Declaring the U.S. will win “in the end,” President Donald Trump vowed Monday night to keep American troops fighting in Afghanistan despite his earlier inclination to withdraw. But he insisted the U.S. would not offer “a blank check” after 16 years of war, and he pointedly declined to say whether or when more troops might be sent.

In a prime-time address billed as the unveiling of his new Afghanistan strategy, Trump said the U.S. would shift away from a “time-based” approach, instead linking its assistance to results and to cooperation from the beleaguered Afghan government, Pakistan and others.

Still, he offered few details about how that approach would differ substantively from what the U.S. has already tried unsuccessfully under the past two presidents.

“We will not talk about numbers of troops or our plans for further military activities,” Trump said. “Conditions on the ground, not arbitrary timetables, will guide our strategy from now on.”

Ahead of his speech, U.S. officials said they expected the president to go along with a Pentagon recommendation to send nearly 4,000 new troops, boosting the total of 8,400 in Afghanistan now. At its peak, the U.S. had roughly 100,000 there, under the Obama administration in 2010-2011.

Trump said his “original instinct was to pull out,” alluding to his long-expressed view before becoming president that Afghanistan was an unsolvable quagmire requiring a fast U.S. withdrawal. Since taking office, Trump said, he’d determined that approach could create a vacuum that terrorists including al-Qaida and the Islamic State could “instantly fill.”

Trump said the American people are “weary of war without victory.”

“I share the America people’s frustration,” Trump said at the Army’s Joint Base Myer-Henderson Hall, in Arlington, Virginia, across the Potomac River from the White House. Still, he insisted that “in the end, we will win.”

Trump’s speech concluded a months-long internal debate within his administration over whether to pull back from the Afghanistan conflict, as he and a few advisers were inclined to do, or to embroil the U.S. further in a war that has eluded American solutions for the past 16 years. Several times, officials predicted he was nearing a decision to adopt his commanders’ recommendations, only to see the final judgment delayed.

The Pentagon has argued the U.S. must stay engaged to ensure terrorists can’t again use the territory to threaten America. Afghan military commanders have agreed, making clear they want and expect continued U.S. military help. But elected officials in the U.S. have been mixed, with many advocating against sending more troops.

As a candidate, Trump criticized the war and said the U.S. should quickly pull out, but he also campaigned on a vow to start winning wars. Exiting now, with the Taliban resurgent, would be impossible to sell as victory.

“I think there’s a relative certainty that the Afghan government would eventually fall,” said Mark Jacobson, an Army veteran and NATO’s former deputy representative in Kabul.

And while Trump has pledged to put “America First,” keeping U.S. interests above any others, his national security advisers have warned that the Afghan forces are still far too weak to succeed without help. That is especially important as the Taliban advance and a squeezed Islamic State group looks for new havens beyond Syria and Iraq. Even now, Afghan’s government controls just half the country.

As officers advocated for the troop increase, the Pentagon did not claim it would end the conflict. But military officials maintained it could help stabilize the Afghan government and break a stalemate with the Taliban.

The setting for Monday night’s speech, Joint Base Myer-Henderson Hall, sits alongside Arlington National Cemetery, the final resting place for many Americans who have died in the war.