The Solar Eclipse in Our Mekoros 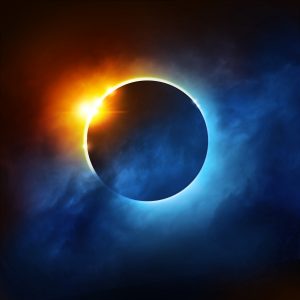 In today’s day and age, with electrically fitted streets and countless machines and gadgets, it can be easy at times to all but ignore the celestial bodies fixed in the firmament above us; we might be forgiven for occasionally even forgetting that they’re there. Of course, they’re still very much there, and none of our technological prowess can change the fact that the sun and the moon were put there by Hashem, and their precise placement and behavior is what contributes to the possibility of life on earth and dictates its cycles. As Yidden in particular, so much of our luach and so many of our halachos call for being in tune with the “comings and goings” of the sun and the moon, and our tefillos are rife with the imagery of Hashem setting them in place and directing their orbit. If that wasn’t enough, the monthly Birkas Halevanah and the less frequent Birkas Hachamah are in some sense a celebration of the wondrous cycles that Hashem has set them on.

However, on occasion, the sun and moon appear to behave “erratically,” not in accordance with their regular cycles and behavior; instead of shining brightly in the sky, they appear to darken before our very eyes, in what are known as solar and lunar eclipses, respectively. In the past, before technological advances minimized the average individual’s reliance and focus on the Heavenly goings on, these events were perceived as particularly loaded and possibly traumatic, especially for those who didn’t understand the astronomical underpinnings of these events. But even today, when the mechanism of the eclipses and the means for predicting their occurrence and duration are fully understood, they remain singular events when people take notice, pull their heads out of their screens, and gawk upwards in awe and wonder.

In light of the upcoming solar eclipse that is projected to cross through the United States on August 21, Erev Rosh Chodesh Elul, it is rather fitting to examine the Torah’s attitude towards this occurrence over the course of generations, especially in light of the Meiri who, commenting on the Gemara in Maseches Shabbos which states that it’s a mitzvah to calculate tekufos and mazalos, adds that this includes knowing the “osos hashamayim ulekus hame’oros.”

The sun and the moon make their first appearance in the Torah at the beginning of Bereishis (1:14), when Hashem said, “Let there be me’oros in the rakiah hashamayim, to distinguish between the day and the night, and they shall be for osos and for mo’adim and for days and years.” Rashi comments on the reference to “osos,” and explains: “When the me’oros are lokin, it is a negative omen for the world, as it says (Yirmiyah 10:2): ‘[So says Hashem: do not learn of the way of the nations], and do not be dismayed by the osos hashamayim [for the nations are dismayed by them].’ When you will do the Will of Hashem, you need not be concerned about pur’anus.” From this Rashi we learn: 1) Other nations feared what these celestial occurrences portended, 2) Their fears were justified because they are indeed a bad omen, 3) Yidden are enjoined not to join the nations in their fears, 4) But only when we do the Will of Hashem, which sadly hasn’t historically always been the case, implying that in such case we should be concerned as well.

This idea as spelled out by Rashi has its source in Maseches Sukkah, where the Mishnah (2:9) states that rain falling on Sukkos is the equivalent of a servant wishing to pour his master a cup, only for the master to pour the contents of the jug in the servant’s face.

We thus see here the kernel of the idea that unwanted happenings in the heavens serve as an expression of Hashem’s displeasure.

The Tosefta (2:7) and the Gemara (29a) elaborate on this idea, extending it to eclipses, attributing their occurrence to various sins, comparing it to a king who prepared a feast for his servants and illuminated the hall with lanterns, only for him to become angry and have the lanterns removed, leaving his guests seated in darkness. Chazal proceed to elaborate that an eclipse visible in the east is a message to those in the east; in the west — to those in the west; a solar eclipse — to the nations who are associated with the sun; a lunar eclipse — to the Yidden, who are associated with the moon, although one opinion states that every eclipse is bad news for the Jews, similar to a melamed who comes to cheder with a strap, which sends a particular message to the pupil who is the usual recipient of punishment.

Ultimately, the Gemara cites the passuk in Yirmiyah and makes the point cited by Rashi that Yidden need not fear if they’re doing the Will of Hashem. Some of these ideas appear in Mechilta Parashas Bo (parashah 1) as well.

These early sources led to a pointed question raised by many meforshim in later generations: A simple, plain reading of Chazal implies that the eclipses (like the rain that falls on Sukkos) are spontaneous reactions to the conduct of the nations below, particularly Yidden. Yet we know that these celestial events are entirely predictable based on an understanding of the route of the moon’s orbit between the earth and the sun, so how then can an entirely preordained natural event be in response to sin or portend the punishment in response to those sins?

For example, we know at the moment that there will be a total solar eclipse in central Argentina and Chile on July 2, 2019, again in southern Chile and Argentina on December 14, 2020, in Antarctica on December 4, 2021, in Mexico, Central United States and East Canada on April 8, 2024, and in Eretz Yisrael and all the countries of North Africa and the Middle East on August 2, 2027. How then are we to understand that these events take place in relation to our actions?

Some mekoros seek to sidestep this question altogether, such as Harav Yonasan Eibschutz, who, in a drashah delivered in Hamburg in 5511 (1751) which appears in Yaaros Devash (vol. 2), said that the Gemara’s reference to the me’oros being lokeh (stricken) seems to be referring to something occurring directly within the luminaries themselves, not to something merely blocking our view. He therefore suggests that Chazal were referring to sunspots which appear on the actual sun (a lesser-known phenomenon before telescopes were invented but something Chazal certainly could have been sensitive to). Similarly, Harav Dovid Pardo, author of Chasdei Dovid on the Tosefta (Sukkah, ibid.), suggests that while ordinary eclipses are predictable, Chazal were referring to other, unpredictable eclipses that occur spontaneously in response to our sins and as a harbinger of punishment. However, others who approached this question seemed to seek an explanation that reconciles the plain reading of the Gemara with the knowledge we have at our disposal.

The Shelah Hakadosh, in parashas Noach, addresses a similar question regarding the os of the keshes, which is also meant to be connected with sin and punishment, yet seems to occur naturally.

He cites an explanation attributed to the Rema, to the effect that Hashem still chooses whether the rainbow should be visible in accordance with our actions, since He could, for example, only have it rain at night when the ensuing rainbow wouldn’t be discernible. It could similarly be suggested that even if an eclipse is preordained, Hashem could still decide whether the eclipse should be visible or whether it should be obstructed by clouds (in fact, the Shelah cites a similar approach to both issues later on in the name of a “chacham muflag” who explained that if we hadn’t sinned, the elements of the world would be more luminous and the moon passing before the sun still wouldn’t obstruct its light).

The Shelah himself offers his own solution to the rainbow-eclipse conundrum, stating that Hashem also foresaw all the sins that were to come, and accordingly scheduled rainbows and eclipses in advance. This, he acknowledges, ties into the larger issue of Hashem’s Yediah vs. our power of bechirah, an issue which he grants a lengthy treatment elsewhere.

Finally, a number of Gedolim, including the Iyun Yaakov (Sukkah, ibid.), the Aruch La’ner (ibid.) and Likutei Sichos (vol. 15, Bereishis), among a number of others, suggest the following explanation: We find in Chazal that certain times have been bestowed a “bad mazal,” during which sins are punished more harshly. Similarly, we could say that the eclipses represent preordained times of bad mazal for the world in response to sins which are essentially ongoing, yet our specific actions at the time will still dictate whether this negativity is actualized or not; and that is why Chazal say that if we do the Will of Hashem, we have nothing to fear. Furthermore, just as certain people are born with more challenging personalities and feel themselves drawn to certain problematic behaviors, yet they are at all times fully capable of reining themselves in, we could say that these predesignated times are moments when we find ourselves drawn more strongly to the sins enumerated in Chazal. Still, it’s possible to overcome the gravity of the moment and avoid temptation and thus avert punishment, although Chazal specifically single out Yidden because the other nations are more strongly associated with teva, and so it’s far more unlikely (though still possible) for them to overcome the pull of the moment, while Yidden have been placed here with the ability and mandate to overcome teva, and thus surely we have nothing to fear.