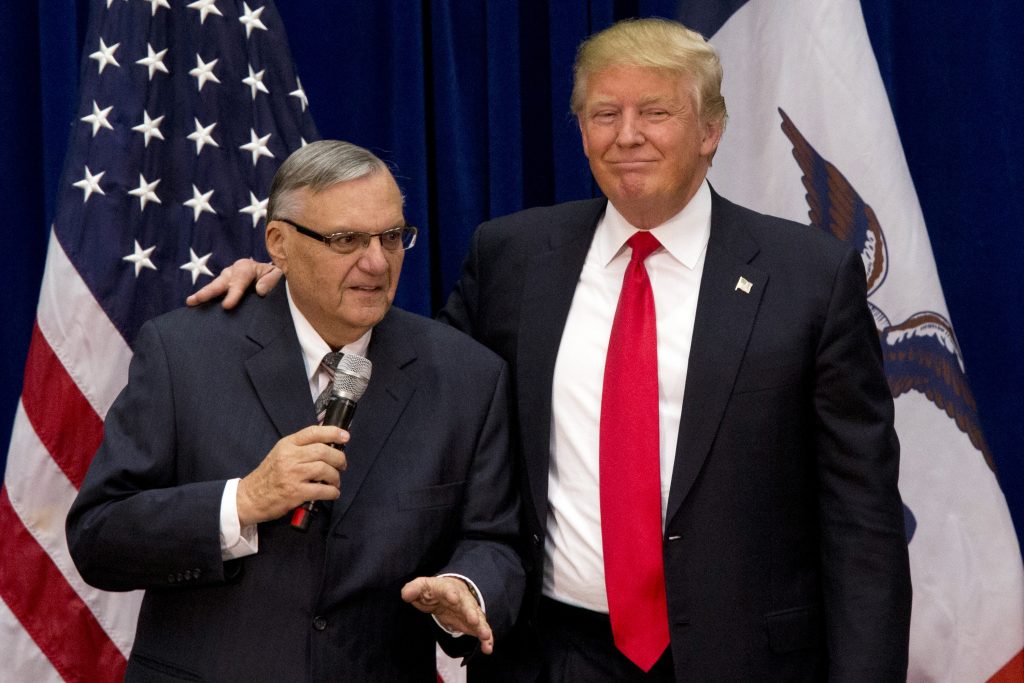 The nation’s political split over President Donald Trump is expected to be on full display Tuesday as hard-core backers of the Republican president flood into the Phoenix Convention Center and police brace for protests from opponents outside.

The rally organized by the Trump campaign will also be a test of the president’s support among his base and elected Arizona Republicans, some of whom won’t show up because of the possible damage he can do to their own political standing. Outside the Convention Center, opponents and Democratic leaders plan protests and marches designed to highlight opposition to Trump’s immigration policies, he remarks last week about an Aug. 12 white supremacist rally in Charlottesville, Virginia, and his possible plans to pardon former Sheriff Joe Arpaio.

Among those not announcing plans to attend the rally by the titular head of the national Republican Party is Arizona Gov. Doug Ducey, whose spokesman said he instead plans to meet the president at the Phoenix airport and then oversee security. Violence in Charlottesville that broke out between white supremacist groups and their opponents provide the governor a clean reason to avoid being seen on stage with the president.

But Ducey’s own top law enforcement officer, Department of Public Safety Director Frank Milstead, said Monday that state resources will mainly be on standby as a “backstop” in case Phoenix Police need to call them in.

Other top Republicans who either will not attend or are not expected to show up are the state’s two senators, John McCain and Jeff Flake. Both have been targets of the president’s wrath.

Of the state’s five GOP House members, three say they will definitely attend — Trent Franks, Andy Biggs and Paul Gosar. Reps. David Schweikert and Martha McCally have not responded to requests seeking information on whether they will attend.

Meanwhile, two of the state’s four Democratic House members plan to be outside protesting.

Mayor Greg Stanton repeated his belief that Trump should postpone the rally to allow time for the country heal and move beyond Charlottesville but was “under no illusion that the president will take my advice.” He said he was expecting tens of thousands of people downtown but said that’s not unusual for the city.

“As mayor of the city of Phoenix, I’m expecting you to be civil, respectful and peaceful,” Stanton said. “I will assure that we are well, well prepared.”

Carlos Garcia of Puente Arizona said protesters will meet Tuesday around 4 p.m. and march from a downtown park to the Phoenix Convention Center, where Trump is scheduled to hold the rally at 7 p.m. Immigrant rights activists protested several of Trump’s Arizona visits, at one point last year blocking a major road that led to a rally he held in Fountain Hills, a Phoenix suburb.

The groups oppose Trump’s possible pardon of former Sheriff Joe Arpaio, who was convicted of misdemeanor contempt of court this year. Trump told Fox News he was seriously considering a pardon. Besides speculation about a possible pardon, there is talk of a possible endorsement of former state Sen. Kelli Ward in her primary challenge to Flake.