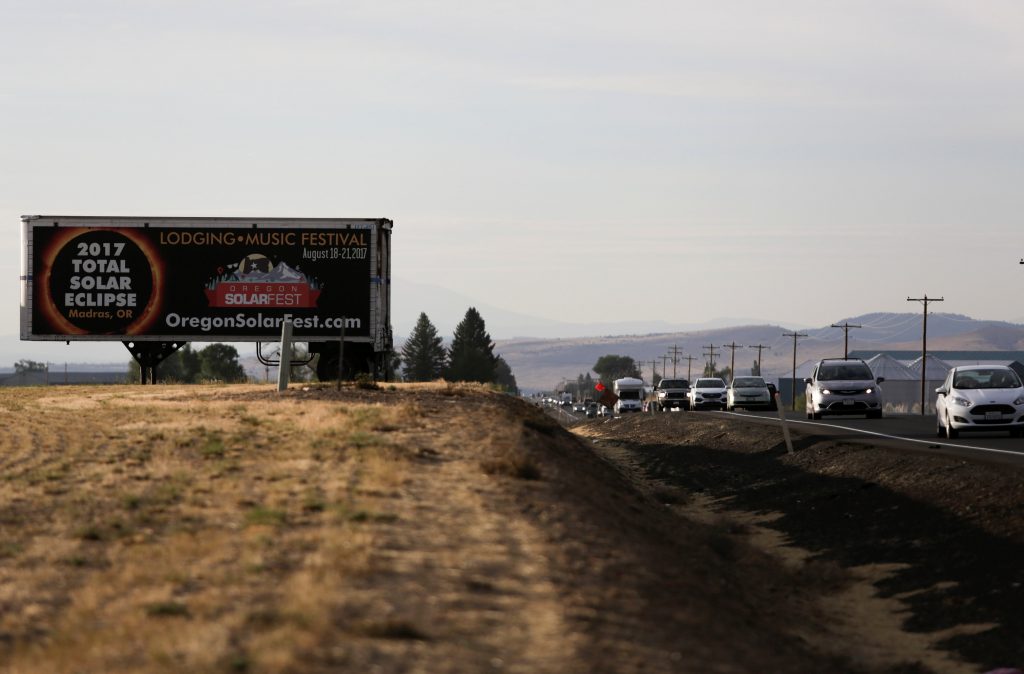 They came from everywhere, flocking to the path of darkness from throughout the United States and scores of other nations, some of them clogging the roads with traffic in lots of tiny places where stop-and-go driving is more rare than a walrus.

“There will be tens of millions of people who see this eclipse, but this is the best spot,” said Blake Marnell, 52, who drove from San Diego deep into the wheat and bean fields of western Nebraska to Carhenge, a replica of England’s Stonehenge located near Alliance, Nebraska. “I figured this was the most American place in America to see the American eclipse. We have won the eclipse.”

After weeks of warnings and preparation in the 70-mile-wide band from Portland, Oregon to Charleston, South Carolina, where the moon will completely block the sun, most places reported that traffic was heavier than normal but not out of hand. An estimated 200 million people are within a day’s drive of the path of the eclipse totality.

Early Monday, about 450 bleary-eyed people who had traveled for five-and-a-half hours from Chicago emerged from an Amtrak’s “Eclipse Express” train in Carbondale, Illinois.

In Hopkinsville, Kentucky, considered “ground zero” for the swath of darkness, Mayor Carter Hendricks said the town was “not having traffic issues . . . Luckily the traffic is flowing pretty smoothly.”

In Culver, Oregon, about 900 people camped in the athletic field at a local school and hundreds more camped in parks and in farmers’ fields. Nearby, drivers lined the rural roads.

At Wyoming’s Glendo State Park, a grassy area had been mowed to allow parking. The area was about half full by midmorning, with cars bearing license plates from states like New Jersey, Maryland, and Minnesota.

At the white water park on the North Platte River in Casper, Wyoming, there was an unexpected emptiness.

“We’re just going to experience it,” said Jerry Condon, of Stillwater, Minnesota, as he sat with five friends on the south bank.

“We got here early to beat the crowd,” Condon said, gesturing to the empty banks. “Maybe it will fill up right before the eclipse.”

Early morning – several hours before the eclipse – arrived in Idaho City, Idaho, to find plenty of parking spaces at the visitor center lot as cars slowly trickled along the two-lane highway that stretched into one of the more rugged and remote swaths of the eclipse’s zone of totality.

But the parking lot began to fill with visitors that took the 35-mile drive from Boise, and by 10:45 a.m. it was packed.

“I can’t believe how many people are here,” said Ginger Thomas, who was selling jam, pancake mix and huckleberry syrup from a market she erected near the lot.

Though Boise County Emergency Management anticipated close to 40,000 vehicles would traverse Boise County’s Highway 55 and Highway 21 over the weekend, there was no sign of that on Highway 21 heading toward Idaho City.

There are peculiar regional standards by which traffic volume is measured, and in the western tip of South Carolina it all has to do with Clemson University football, which draws on a football weekend more than 81,000 people to a town of 14,000.

In the path of Monday’s eclipse, Clemson swelled by thousands and a pair of local inhabitants, Hannah Chapman, 21, and Morgan Davis, 21, proclaimed their town as “totally packed” as it becomes on any football weekend.

In Charleston, the city where the eclipse will exit the U.S., scores of people rafted their boats on Shem Creek off the Cooper River to watch the darkness descend. People organized paddleboard and kayaking groups to observe it, and there was a line out the door at the Big Box Liquor Store.