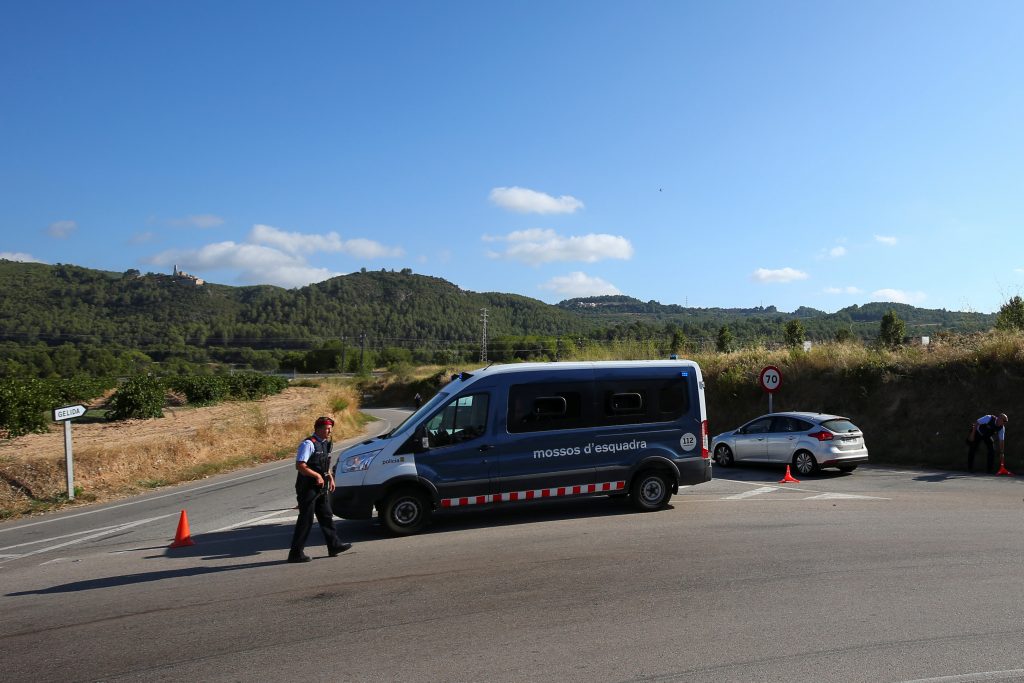 A man thought to be the driver in the Barcelona van attack was shot dead by Spanish police Monday after authorities announced he also was suspected of killing the owner of a hijacked getaway car. The fugitive was wearing a bomb belt, authorities said.

Younes Abouyaaqoub was shot when officers confronted him in Subirats, a rural area known for its vineyards about 28 miles west of Barcelona, police in Spain’s Catalonia region said. A bomb disposal robot was dispatched to approach him, police said.

Abouyaaqoub, 22, had been the target of an international manhunt that had raised fears throughout the region since Thursday’s van attack in Barcelona.

Authorities said Monday they now have evidence that Abouyaaqoub drove the van that plowed down the city’s famed Las Ramblas promenade, killing 13 pedestrians and injuring more than 120 others.

They said Abouyaaqoub, who was born in Morocco and has Spanish residency, also is suspected of carjacking a man and stabbing him to death as he made his getaway, raising the death toll between the Barcelona attack and a related attack hours later to 15.

Another vehicle attack early Friday by other members of what Catalonia regional police have described as a 12-member extremist cell killed one person and wounded several others in the coastal town of Cambrils. That ended in a shootout with police, who killed five attackers.

The Islamic State terrorist group has claimed responsibility for both attacks.

Roser Ventura, whose father owns a vineyard between the towns of Sadurni d’Anoia and Subirats, said he alerted the regional Catalan police when they spotted a car crossing their property at high speed.

“The police told us to leave the premises and go home. We heard a helicopter flying around and many police cars coming toward the gas station that is some 600 meters from the property,” Ventura said.

He said the suspect walked through Barcelona for about 90 minutes after the van attack – through the famed La Boqueria market and nearly to Barcelona University – before hijacking the car. Abouyaaqoub is believed to have made his getaway in the stolen car with Perez’s body inside.

Trapero said Perez was already dead when Abouyaaqoub then rammed the car through a police checkpoint minutes later and police opened fire on his car.

The suspect ran over a police officer as the car evaded the checkpoint. About 7 p.m., police found the car and Perez’s body nearly 2 miles away from the checkpoint, near Sant Just Desvern, a town west of Barcelona, but Abouyaaqoub was nowhere to be found.

The Spanish newspaper El Pais published images Monday of what it said was Abouyaaqoub leaving the van attack site on foot. The three images show a slim man wearing sunglasses walking through the La Boqueria market.

Abouyaaqoub escaped and had not returned to his home in Ripoll, said Trapero. The manhunt for him reached well beyond Spain’s borders. Four other suspects have been arrested.

Regional authorities said Monday that 48 people were still hospitalized from both attacks, eight of them in critical condition.

Abouyaaqoub was believed to be the lone attacker on the run by Sunday. Authorities hadn’t confirmed his identity because they were having difficulty identifying the remains of at least two terrorists who died Wednesday in an explosion at a house in Alcanar where explosives were being prepared.

The explosion destroyed the house, but police found remnants of over 100 butane gas tanks and materials needed for the TATP explosive, which has been used previously by Islamic State terrorists.

Those discoveries, and reports that Abouyaaqoub had rented three vans, suggested the terrorist cell was making plans for an even more massive attack on the city.

Carles Puigdemont told La Sexta television the barriers wouldn’t have prevented vehicles from entering the promenade at other points – and he said closing off Las Ramblas was impractical because emergency vehicles still needed access.

On Monday, crowds of people continued to lay flowers, candles and heart-shaped balloons at the top of the pedestrian promenade where the van struck and at other smaller tributes.

Las Ramblas also regained some normality Monday, with throngs of people walking up and down, tourists arriving and residents going about their daily business.

“We have to stand strong in front of these betrayers, assassins, terrorists,” said resident Monserrat Mora. “Because Barcelona is strong and they will not be able to prevail with us.”