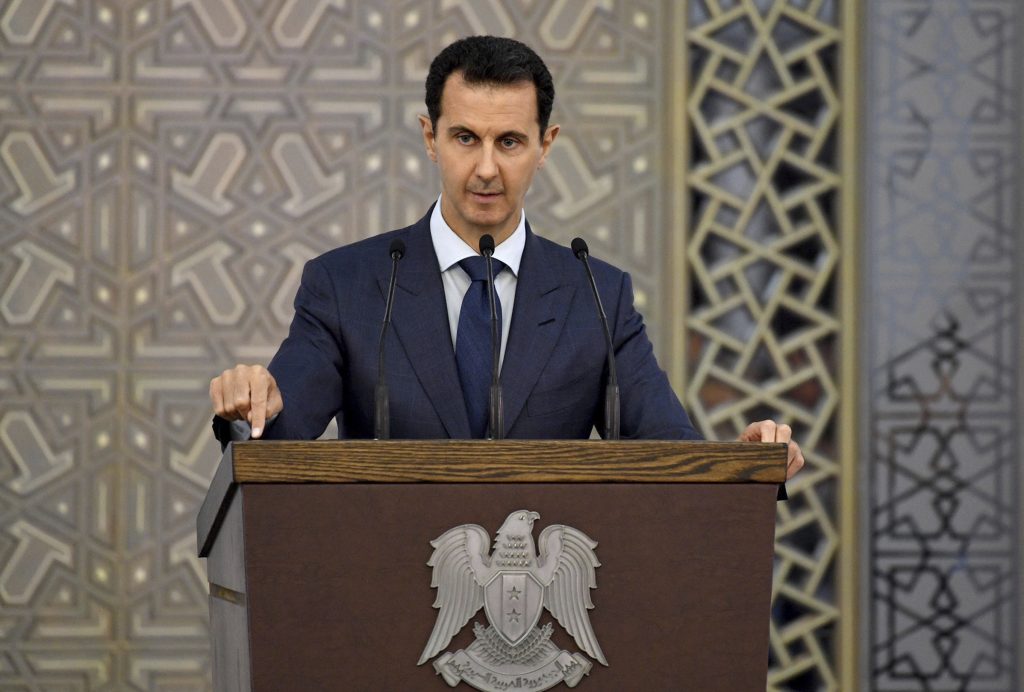 Syrian President Bashar Assad on Sunday refused any security cooperation with Western nations or the reopening of their embassies, until they cut ties with opposition and insurgent groups.

Shortly after Assad gave his speech, a shell hit the first international fair in the country since the war began six years ago, killing and wounding several people.

Assad’s defiant comments come at a time when his troops and pro-Iranian militiamen are gaining ground across the country under the cover of Russian airstrikes. Many countries have ceased calling for him to step down.

Speaking before dozens of Syrian diplomats in Damascus, Assad praised Russia, Iran, China and Lebanon’s Hezbollah for supporting his government during the conflict.

He said Syria will look east when it comes to political, economic and cultural relations.

“The direct support of our friends, politically, economically and militarily, made our advance on the ground greater and the losses of war less. Therefore, they are our partners in these achievements on the road to crush terrorism,” Assad said.

“Let’s be clear. There will be no security cooperation nor opening of embassies or even a role for some countries that say that they want to play a role in ending the crisis in Syria before they clearly and frankly cut their relations with terrorism,” Assad said. “At that point maybe we can speak about opening embassies.”

The Syrian crisis began in March 2011 with a peaceful uprising against Assad’s government, later escalating into a full-fledged civil war after a brutal government crackdown and the rise of an armed insurgency. The conflict has since killed an estimated 400,000 people and displaced half the country’s population.

In the early years of the conflict, many Western and Arab countries called on Assad to step down, and both the U.S. and the European Union have imposed sanctions on his government. Several Arab and Western countries also withdrew their diplomats from Damascus.

But after the Islamic State group declared a caliphate in large parts of Syria and Iraq, the international focus turned to crushing the extremists, who have planned attacks around the world that killed and wounded hundreds of people.

The Syrian president said his country’s economy is turning to growth again “at a very slow pace, although we are under an almost complete embargo.”

Assad said that hardly a week passes without an attack in the West, referring to assaults carried out by IS supporters.

“These facts are what forced them (the West) to change their stance,” Assad said.

He welcomed recent deals to de-escalate violence in Syria, but vowed not to give the opposition in politics what it failed to gain through arms.

The de-escalation zones in central, northern and southern Syria were proposed in a plan approved in May by Russia, Turkey and Iran in the Kazakh capital, Astana. The plan included a cessation of hostilities, a halt to Syrian government air raids over designated areas, and provisions for humanitarian aid access.

Despite that deal, Assad said Syrians don’t trust Turkish President Recep Tayyip Erdogan and that the Syrian leader does not consider him to be a guarantor. Erdogan’s government is a main backer of Syrian rebels, and sent troops into Syria a year ago to battle IS and to halt the advance of Kurdish forces. Those troops, and allied Syrian forces, now control a stretch of Syrian territory along the border.

“Any Turkish citizen who is in Syria without permission from the Syrian government will be considered an occupier,” Assad said.