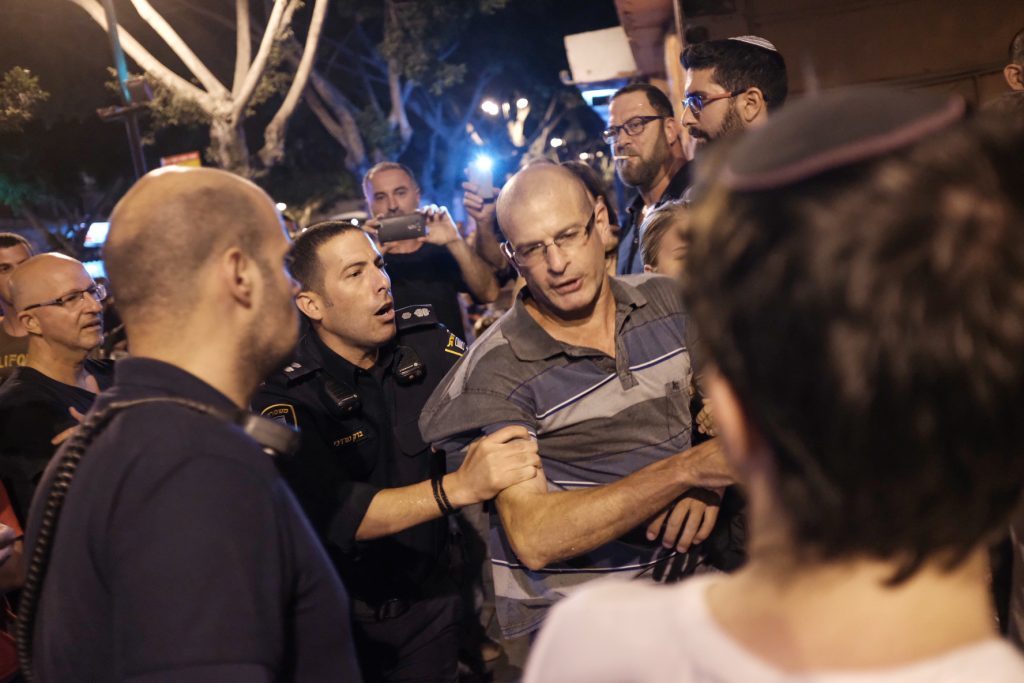 Police said Sunday that they would continue to enforce court decisions and prevent illegal demonstrations from taking place anywhere in Israel, including Petach Tikvah. The statement came after media criticism of arrests by police of several people at an illegal demonstration near the Petach Tikvah police station, a substitute demonstration for one that for the past few months has been taking place every Motzoei Shabbos outside the home of State Attorney Avichai Mandelblit.

Police said in a statement Sunday that the demonstration that took place the evening before had “been out of proportion, and it is ironic that a demonstration that ostensibly calls for enforcing the law should be conducted illegally.”

The demonstrators, who have gathered outside Mandelblit’s house on Motzoei Shabbosos for the past three months, are urging the State Attorney to act more aggressively in corruption investigations against Prime Minister Binyamin Netanyahu.

Last week Likud members held a demonstration supporting the Prime Minister, and in the wake of ongoing complaints by residents over the noise and disorder, police said they would ban the demonstrations altogether – a decision that was backed by the High Court last week.

Despite that, anti-Netanyahu demonstrators gathered to protest the decision in a park outside the Petach Tikvah police station, ignoring appeals, requests and threats by police to break up the illegal gathering. Demonstrators attempted to march to Mandelblit’s house, but were blocked by police. Police arrested several people, among them two of the organizers of the march: journalist and Ehud Barak-adviser Eldad Yaniv, and Meni Naftali, a former employee of the Prime Minister’s Residence who claimed that Sarah Netanyahu was guilty of corruption. The two were accused of encouraging demonstrators and urging them to disobey police.

The arrests were widely criticized by media figures and leftist MKs. MK Yoel Hasson (Zionist Camp) said that the arrests and attempts by police to block marchers were “another sign of the deterioration of democracy. There is a clear connection with the Likud protest last week and the violence demonstrated by police this week. There is a clear hand involved here turning police into a political tool.”

MK David Bitan (Likud) said that he “congratulated police for preventing the left from marching on Mandelblit’s home. It is about time that the anarchists among us learn that they cannot impose their will on us with violence, and that the undemocratic attempt to intimidate the State Attorney by causing suffering and inconvenience for residents is illegal and immoral. We in the Likud decided to respect the police order and we did not hold a demonstration this week.”