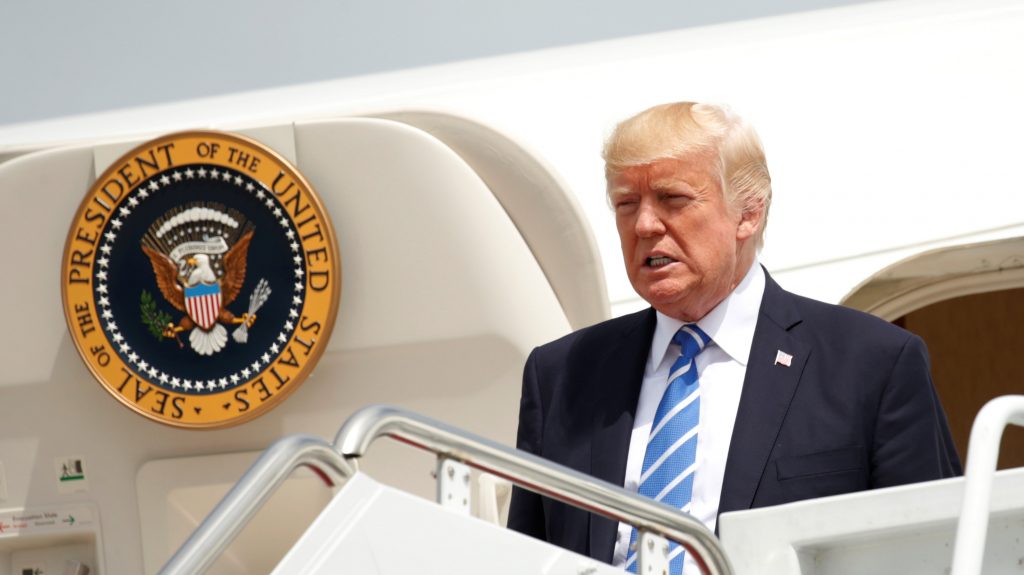 Acknowledging that he has become a “political distraction,” President Donald Trump has decided to skip the festivities surrounding the annual Kennedy Center Honors arts awards later this year, the White House announced Saturday amid the continuing fallout over Trump’s stance on last weekend’s white supremacist demonstration in Charlottesville, Virginia.

The Kennedy Center said it respected Trump’s decision and the show will go on.

Trump and first lady Melania Trump reached their decision Friday, a White House official said, the same day that the entire membership of the President’s Committee on the Arts and the Humanities resigned in protest over Trump’s remarks about Charlottesville. The official was not authorized to publicly discuss internal deliberations and insisted on anonymity to comment.

Trump has blamed “both sides” for the Aug. 12 violence that left an anti-racism activist dead.

Presidents traditionally host a light-hearted and oftentimes humorous gathering for the honorees at the White House before the awards ceremony at the performing arts center. Trump will not hold that reception this year, and he and the first lady will not attend the gala.

It will be the fourth time in the awards’ 40-year history that a president will miss out on the ceremony.

Trump long has had a contentious relationship with the arts world and some of those being recognized for lifetime achievement in their fields had already made clear they would boycott a White House reception presided over by Trump.

His decision capped a week in which he was put on the defensive over his Charlottesville remarks.

Elected and former elected officials in both parties urged Trump to more forcefully denounce the neo-Nazis and white supremacists who marched through Charlottesville, while others openly questioned his competence and moral leadership.

Corporate titans whom Trump enjoyed schmoozing with at the White House fled advisory boards they had agreed to serve on, while uniformed leaders of the armed services denounced racism and hatred without naming their commander in chief.

One of Trump’s evangelical advisers also stepped down, and the number of major charities that are canceling fundraisers planned for Trump’s property in Palm Beach, Florida, has been rising.

“The president and first lady have decided not to participate in this year’s activities to allow the honorees to celebrate without any political distraction,” White House press secretary Sarah Huckabee Sanders said in a statement. Sanders said the Trumps offer their “sincerest congratulations and well wishes to all of this year’s award recipients for their many accomplishments.”

Representatives for the remaining honorees did not respond to requests for comment.

Some celebrities supported Trump. Ted Nugent said on Fox News Channel this week that Trump was not unambiguous in his remarks.

“We condemn all violence. That’s what President Trump said. And all lives matter. If you don’t agree with, that you’re a racist,” he said.

“In choosing not to participate in this year’s Honors activities, the administration has graciously signaled its respect for the Kennedy Center and ensures the Honors gala remains a deservingly special moment for the honorees. We are grateful for this gesture,” they said in a joint statement.

“This is the first time you’ve had a president who is not attending because he did not want to be embarrassed by people not showing up for their honors,” said Steven J. Ross, a University of Southern California history professor.

Presidents Jimmy Carter, George H.W. Bush and Bill Clinton missed the gala due to major issues that demanded their time. Carter didn’t attend in 1979 because of the Iran hostage crisis, Bush was at a summit in Malta in 1989 while Clinton was on his way to a conference in 1994.

All five honorees will be celebrated at the Kennedy Center on Dec. 3 with performances and tributes by top entertainers. A traditional State Department reception and awards dinner on Dec. 2 will be held as planned.