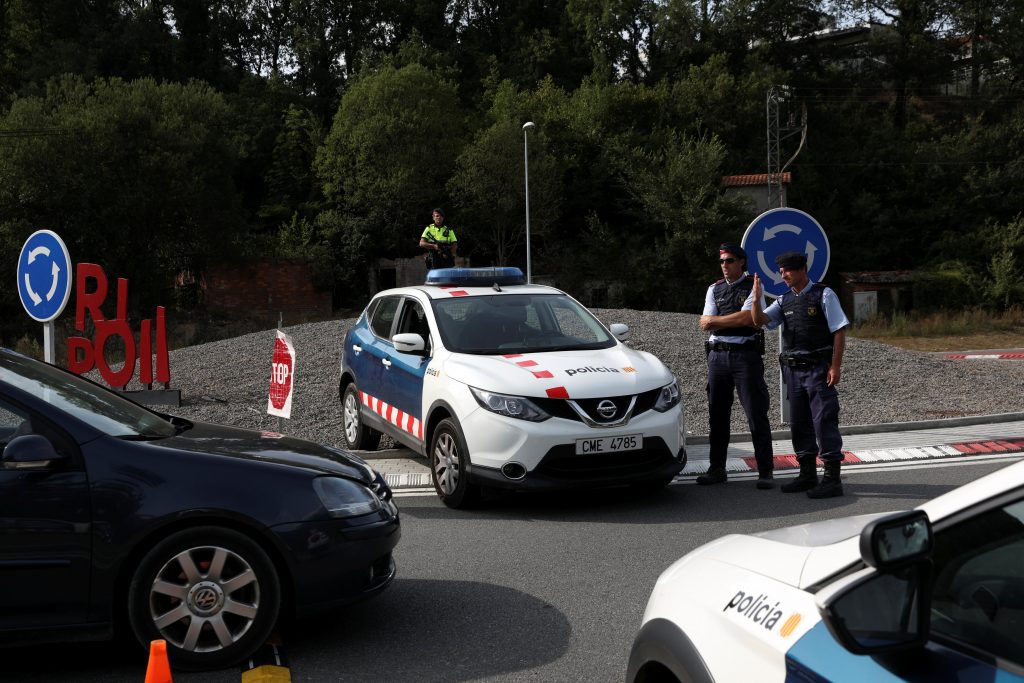 A missing imam and a house that exploded days ago became the focus Saturday of the investigation into an extremist cell responsible for two deadly attacks in Barcelona and a nearby resort, as authorities narrowed in on who radicalized a group of young men in northeastern Spain.

Investigators searched the home of Abdelbaki Es Satty, an imam who in June abruptly quit working at a mosque in the town of Ripoll, the home of the Islamic radicals behind the attacks that killed 14 people and wounded over 120 in the last few days. Police were trying to determine whether Es Satty was killed in a botched bomb-making operation on Wednesday, the eve of the Barcelona bloodshed.

His former mosque has denounced the deadly attacks and weeping relatives marched into a Ripoll square on Saturday, tearfully denying any knowledge of the radical plans of their sons and brothers. At least one of the suspects is still on the run, and his younger brother has disappeared, as has the younger brother of one of the five attackers slain Friday by police.

Catalan police said a manhunt was centered on Younes Abouyaaquoub, a 22-year-old Moroccan suspected of driving the van that plowed into a packed Barcelona promenade Thursday, killing 13 people and injuring 120. Another attack early Friday killed one person and wounded five in the resort of Cambrils.

The Islamic State terrorist group has claimed responsibility for both.

Everyone so far known in the cell grew up in Ripoll, a town in the Catalan foothills near the French border 62 miles north of Barcelona. Spanish police searched nine homes in Ripoll, including Es Satty’s, and two buses, and set up a roadblock that checked each car entering the town. Across the Pyrenees, French police carried out extra border checks on people coming in from Spain.

Neighbors, family and even the mayor of Ripoll said they were shocked by news of the alleged involvement of the young men, whom all described as integrated Spanish and Catalan speakers with friends of all backgrounds.

Even with Abouyaaquoub at large, Spanish Interior Minister Juan Ignacio Zoido declared the cell “broken” Saturday. In addition to the five killed by police, four were in custody and one or two were killed in a house explosion Wednesday. He said there was no new imminent threat of attack.

Police also conducted a series of controlled explosions Saturday in the town of Alcanar, south of Barcelona, where the attacks were planned in house that was destroyed Wednesday by an explosion. Authorities had initially thought it was a gas accident, but took another look after the attacks.

Initially, only one person was believed killed in the Wednesday blast. But officials said DNA tests were underway to determine if human remains found there Friday were from a second victim. A police official, speaking on condition of anonymity to discuss the ongoing searches, said investigators believed the remains may belong to Es Satty.

The official said investigators also discovered ingredients of the explosive TATP, used by the Islamic State terror group in attacks in Paris and Brussels, as well as multiple butane tanks that the group may have wanted to combine with the homemade explosive and load into their vehicles.

Authorities said the two attacks were the work of a large terrorist cell that had been plotting for a long time from the house in Alcanar, 125 miles down the coast from Barcelona.

The lone named suspect still at large, Abouyaaquoub, figures on a police list of four main suspects sought in the attacks. Also on the list is 17-year-old Moussa Oukabir, whose brother Driss reported to police that his documents stolen. Ripoll’s mayor confirmed that those documents were found in a vehicle used in the attacks. Moussa was one of the five radicals killed, and Driss is in custody, police said.

A French police official said authorities were also looking for a Kangoo utility vehicle that was believed to have been rented in Spain by a suspect in the Barcelona attack that might have crossed the border.

The sheer size of the cell and the close family relations among the terrorists recalled the November 2015 attacks in Paris, in which Islamic State terrorists struck the national stadium, a Paris hall and restaurants nearly simultaneously, leaving 130 people dead. Since then, the terrorist group has steadily lost ground in its self-declared caliphate in Iraq and Syria.

Islamic terrorists have made a point of targeting Europe’s major tourist attractions in recent years — especially in rented or hijacked vehicles.

Yet Spain decided to keep its terrorist threat alert at level 4 — out of five — declaring Saturday that no new attacks were imminent. Zoido said the country would reinforce security for events that draw large crowds as well as at popular tourist sites.

By late Saturday, the Catalan emergency service said 53 people remained hospitalized, 13 of them in critical condition.